Editor's note: This week, we're taking a break from our usual fare to share an essay from Matt McCall's Daily Insight. In it, editor Matt McCall discusses the misleading nature of recent market headlines... and shows why we can look at the latest price action to prove them wrong.

Also, our offices will be closed on Monday in observance of Presidents' Day. Look for the next edition of DailyWealth on Tuesday. Enjoy the holiday!

Some negative headlines spare no time getting right to the point...

For example, I've been seeing some that are phrased like this: Analysts and talking heads are calling for a recession and bear market.

Greenlight Capital's David Einhorn – one of the more widely followed hedge-fund investors – said in late January that inflation will lead to a recession. A recession is defined as two straight quarters of negative gross domestic product ("GDP") growth.

Einhorn doesn't have the best track record... His hedge fund has grossly underperformed the market, returning 11.9% in 2021 while the broad-based S&P 500 Index returned 26.9%.

But he's far from alone in his beliefs. The number of people calling for a much bigger downturn ahead continues to increase by the day.

It's no wonder so many investors let emotion take over and are driven to sell. But despite what you're seeing in the financial media, now is not the time to get out.

I'm not just saying that because of a gut feeling. I have research, historical trends, and cold hard facts to back me up...

I'm also not saying that a recession will never happen. My 20-plus years in the stock market have taught me that anything is possible – and pullbacks are part of the investing game.

What I am saying is that based on the current data, the odds of a recession in the near term are very low.

GDP growth is still expected to be robust this year. And so are corporate profits – which are forecast to hit their highest level ever.

Stocks don't follow fundamentals in the short term. But over time and as companies make more money, stock prices are bound to reach new highs. That's the future we're currently looking at.

From a pure investment standpoint, I love when billionaires and talking heads turn bearish after a correction. Remember that these folks typically don't share their views until months after they've positioned their strategy...

As a result, I'm taking the contrarian view. I'm not listening to the talking heads.

Instead, I'm taking advantage of the fear and panic by buying into strong companies that will continue to grow no matter what the market throws their way.

Most news stories are bemoaning the stock market fall we saw last month... Just take a look at this other recent headline: The major stock indexes are hitting multimonth lows and breaking down.

More important, they warn how much worse things will get in the near term.

A lot of these fear-inducing headlines are based on misinterpreted "technicals."

Technical analysis is essentially chart-reading. A lot of investment advisers and fund managers ignore and even put down chart analysis... And it's true, chart analysis can be subjective and manipulated to create predetermined outcomes.

But I learned early on how to read charts and understand what they mean for the long term. And what I love about them is that the actual chart can never be influenced by the media or any other outside factor.

The charts tell the real story behind the headlines. And they can show us some important things today.

In the long term, all U.S. stock market indexes remain bullish. But in the short term, stocks are at a critical level. Take a look at this example. You can see that the S&P 500 has been holding above an important price-support level created in October... 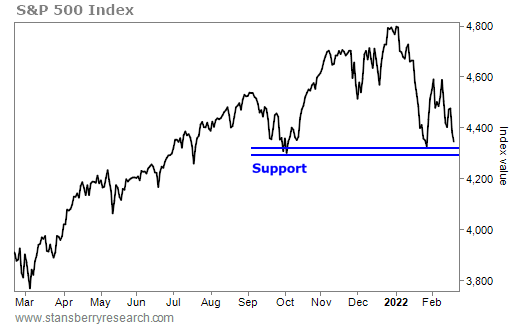 The Nasdaq Composite hasn't held up quite as well, as tech stocks continue to get hammered. But the Dow Jones Industrial Average has been acting much like the S&P 500. It's bouncing off multiple price-support levels today.

This makes the action over the next few days and weeks critical. If stocks move higher, it will be a bullish sign going forward.

In short, the long-term economic outlook is still good. And the charts don't spell doom for the near-term picture, either – despite what the headlines are saying.

This is why it's important to remain calm and maintain a big-picture outlook in times of volatility, like today...

Right now, stocks are sitting on support – so the last thing we want to do is sell. The risk-to-reward ratio is in buyers' favor.

Editor's note: Right now, Matt sees a rare opportunity to buy into some of the world's most innovative companies at steep discounts... And he has the data to back it up. Next week, he's hosting an emergency briefing to share why a handful of companies are about to become key players in our future – no matter what happens in the short term – and why they're positioned for unstoppable long-term growth... To learn more, click here.