Editor's note: We know this bear market is setting up a historic buying opportunity... But timing it is the hard part. Even the short-term uptrend can fool you in periods like these. So today, we're sharing an update from our colleague Dan Ferris on what these traps can look like... And if you haven't already, don't forget to watch his recent warning right here.

The S&P 500 Index hit a new two-year low last week. Since then, stocks have risen 3% as I write. And you might be asking yourself what's next...

Regular readers know that I normally avoid this type of question. I hate the whole idea of basing an investment strategy on trying to predict the future.

As I've often said, it's better for investors to prepare for the future than try to predict it.

I'm unlikely to change my mind about that.

But in today's essay, we'll look at some historical data. As you'll see, I believe it can help you prepare for a scenario that has broken too many investors – and avoid a trap that's becoming more dangerous by the day.

History can be an excellent guide to the future...

That's why I often refer to past market cycles as guides to understanding the present.

I recently saw two interesting charts of bear markets from two key historical eras – the dot-com bust from 2000 to 2002, and the great financial crisis from 2007 to 2009.

Researchers at financial-services company Piper Sandler looked at the number and size of bear market rallies from both eras. And the results reveal an intriguing trend...

Piper Sandler identified six bear market rallies in the dot-com bust and five rallies during the Great Financial Crisis. In comparing the two sets of data, a striking pattern emerges... 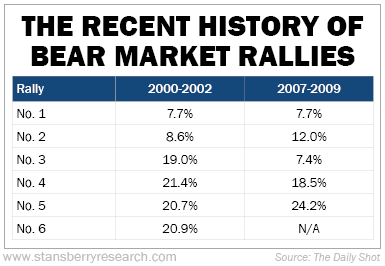 The bear market rallies later in the cycle – toward the bottom of the table – were noticeably larger than the initial ones.

Investing is an art, not a science. So I'll just give you my artistic interpretation of the earlier rallies in each bear market...

The early rallies were small for a simple reason. In each bear market, investors had become indoctrinated into being bullish. They were used to buying every dip for several years leading up to the top.

So in the start of the downturn, Evil Mr. Market didn't need to work hard to entice stubborn bulls back in before punishing them again. As a result, the early bear market rallies were shallow.

But after burning investors too many times, Evil Mr. Market had to work harder...

The later rallies needed to be larger in order to keep luring in beleaguered, increasingly bearish investors – before crushing them again.

Sooner or later, investors capitulate. Evil Mr. Market gets the best of them. And many folks give up on stocks for years. That's when stocks finally hit bottom.

Bear market price action is characterized by a series of lower highs and lower lows.

Without getting into technical gobbledygook, I imitated Piper Sandler's method of measuring bear market rallies to see what has been playing out this time. Here's what that looks like... 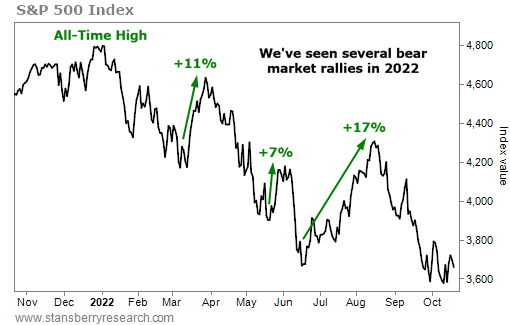 I don't think it's reasonable to expect all great bear markets to be identical. History rhymes more often than it repeats, after all. That said, it certainly appears to be rhyming today...

Several times this year, investors were fooled into thinking the bottom was in. We've even seen some bigger rallies already – including the 11% climb in March and the 17% run-up that began in June. However, importantly, we haven't yet seen a bear market rally of 20% or more.

I don't do predictions, but I like to understand risks... and prepare for a wide set of outcomes.

And today, we need to consider the risk that this bear market will play out similarly enough to the most recent two bear markets (not including the one-month crash due to COVID-19 in early 2020).

If so, we could see more bear market rallies to come... and a lot more pain for investors who fall for Mr. Market's tricks.

Our two historical episodes suggest investors who had reaped big gains for years behaved a certain way when the trends went into reverse. And human nature being what it is... I believe folks will repeat those behaviors this time as well.

It's like a moth flying through a flame again and again.

Most folks should focus on survival and adopt my "prepare, don't predict" mantra. If you've done that, you're probably following the basics of a solid defensive strategy...

The little rally we've seen in the past week changes nothing. Stay the course – steady as she goes.

Editor's note: Dan says the stock market could crash 75% or more as the "mega bubble" continues its slow collapse... But even if only part of his recent warning plays out, the effects will be devastating for those who don't prepare now. To get through the next several years (and beyond) with your wealth intact, you may need to completely change how you think about investing.

That's why Dan's latest interview is a must-see. He's sharing the top steps you should take now to protect your money, including two stocks to sell right away... Watch his discussion right here.

"Panic-buying is just as common as panic-selling during bear markets," Dan says. Even one prominent bearish investor has started hunting for bargains. But it's likely still too soon to make a contrarian, bullish bet... Read the full story here.

Just as rallies during a bear market can get larger as time goes on, so can bear market crashes. That's especially important to remember now – because one valuation measure shows stocks could still suffer big downside from here... Learn more here.