It was the waning days of World War II, and the Japanese Army had stationed Hiroo in the Philippines. He was to sabotage the area's airstrips.

Hiroo had studied propaganda during his elite commando training. That's how he knew the leaflet was a ploy...

The leaflet read, "The war ended on 15 August. Come down from the mountains!" So Hiroo did the opposite and embedded further.

Except – the flier wasn't a ploy after all. It was October 1945, and Japan had announced its surrender two months ago. But Hiroo didn't follow suit.

Instead, he waged a one-man war on the surrounding countryside. It would last for 29 years. Finally, his commanding officer came out of retirement in 1974 to convince him of the truth.

You might call Hiroo noble. You might call him foolhardy. Whatever he was, he spent 10,000 days alone in a jungle when he didn't have to...

This is a timely message for investors in the market today. A war that was raging in 2021 has come to an end. But instead of facing the facts, investors are doubling down like Hiroo did.

It all started in the most unlikely place... the subreddit r/wallstreetbets.

It kicked off a now-legendary short squeeze. And in a month, the struggling game retailer's share price soared 30 times.

We've all heard the story... It shook Wall Street and shuttered hedge funds. It buoyed declining stocks like movie-theater chain AMC Entertainment (AMC). And it thrust "meme stocks" into the spotlight.

The problem is that this could never last. It was a bubble from the start. And now, it seems investors are moving past the mania of GameStop and AMC. Both stocks are now roughly 70% off their 2021 highs.

This isn't to say that either company will go away soon. But the bubble has popped. And thinking it'll reinflate, well, means you don't understand bubbles.

Unfortunately, some investors are still all-in.

Two other Reddit forums, r/Superstonk and r/amcstock, are havens for bullish meme-stock investors. Combined, they boast more than 1 million subscribers...

Their ranks are full of self-styled "Apes" who still pour their money into meme stocks. Posts like these routinely net thousands of upvotes... 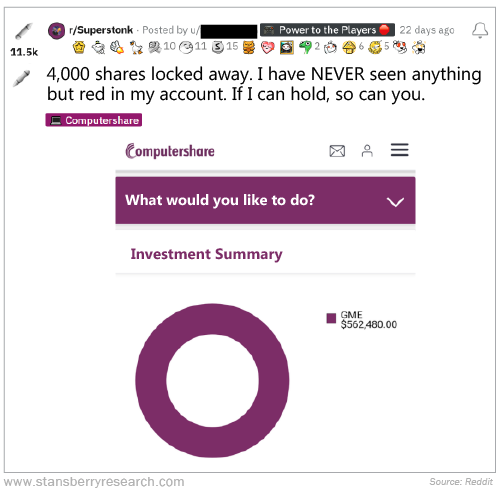 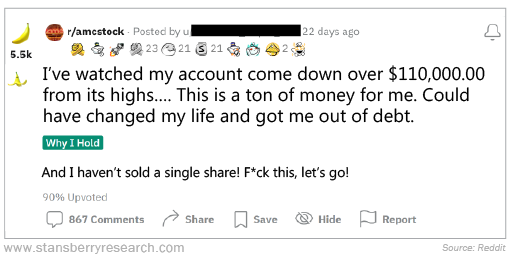 These holdout investors are hoping for lightning to strike the same place twice. And investment managers are happy to make money off their foolishness.

The Roundhill MEME Fund (MEME) debuted last December. It holds 25 meme stocks... And it launched at the worst possible time. Shares are down 30% in just two months.

If you're buying MEME or any of these companies today, take a lesson from history. Learn from Hiroo's example. And follow this advice...

The war is over. Come down from the mountains.

The stock market has a history of sucking in folks looking for easy money when times are good. But these same people get completely wiped out and lose all their money on the way down... Read Steve's two-part essay about making the most of the Melt Up here and here.

There's no such thing as a "sure thing" in the investing world. The best bets can easily turn from life-changing gains to crushing losses. That's why you always need to protect your downside... Read more about this simple strategy here: The Secret to Taking Profits Instead of a 70%-Plus Loss.

Today’s company is supporting our doctors and health care providers…

As COVID-19 lingers on, our medical system continues to face a strain on resources. And with new variants on the rise, hospitals and care providers need the tools to care for all their patients as efficiently as possible. Today’s medical company is helping to provide this crucial service…

Allscripts Healthcare Solutions (MDRX) is a $2.5 billion leader in health care information technology. It helps streamline the workflow for physicians and hospitals with its electronic health records (EHRs). Not only are EHRs user-friendly, but they help improve connectivity among medical organizations… which in turn helps their patients. In the most recent quarter, Allscripts saw continued success with revenue of $369 million, up slightly year over year. The company also raised its earnings guidance for the full year.

As you can see, MDRX shares have been trending higher since the pandemic first swept the U.S. in 2020. They’re up roughly 140% over the past two years, and they just hit a multiyear high. As our medical system does all it can to keep running in overdrive, this trend should continue… 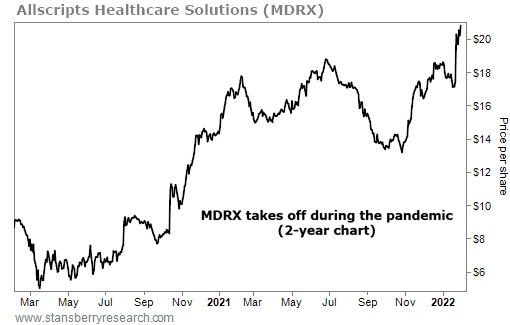