Warren Buffett is the world's most famous value investor. Rather than chasing hot speculative trends, he focuses on strong companies he believes the market has failed to fully appreciate.

But before he could become "the Oracle of Omaha" and turn Berkshire Hathaway into the $580 billion holding company it is today, Buffett had to unlearn his first approach to value investing... and forsake his beloved teacher.

It's a lesson that many money managers have had to discover in recent decades. I hope you have, too...

Buffett learned about value investing from Benjamin Graham, one of his professors at Columbia Business School, where he completed a master's in economics in 1951.

Graham invested actively and used his class to analyze the stocks of the day. His students made money off the things they learned in class – immediately. According to one student who took Graham's course twice...

He was giving you ideas. Youngstown Sheet & Tube I bought at 34 5/8 and sold between 75 and 80. I bought GM on his recommendation, also Easy Washing Machine... Real Silk Hosiery was another stock. The class paid for my degree.

Graham had a specific methodology... deep-value investing. That meant finding a company with assets that were unquestionably worth more than what you could buy the stock for.

The goal of this style of value investing is to find something so cheap that it has to be a good deal. In his typically folksy way, Buffett called these investments "cigar butts." Sure, cigar butts may be worth little, but if you can pay even less than "little," you might still get a few puffs out of them.

But the young Warren Buffett ran into a lot of trouble finding cigar butts...

For one, there weren't that many of them. As his investment company grew, he needed to find more and bigger butts. Also, most cheap companies come with all sorts of troubles – and they can screw you over before you can take those last puffs.

Buffett carries a reminder of this danger every time he looks at the name of his company...

The original Berkshire Hathaway was a textile company. And by the middle of the 20th century, it had become just about impossible to make textiles in the U.S. due to prohibitive labor costs.

In 1964, Buffett had been buying up shares of Berkshire Hathaway. You see, each time it closed a mill, it would use the cash to buy back shares. That looked like a profitable way to get those final puffs from a dying company. Berkshire shares were stunningly cheap, making it look like a strong value investment. But as Buffett explained in a 2010 interview with cable network CNBC...

Because Berkshire Hathaway was carrying this anchor, all these textile assets. So initially, it was all textile assets that weren't any good. And then, gradually, we built more things on to it. But always, we were carrying this anchor. And for 20 years, I fought the textile business before I gave up. [If] instead of putting that money into the textile business originally, we just started out with the insurance company, Berkshire would be worth twice as much as it is now.

Buffett eventually learned to leave Graham's pure value investing behind. Here's what he wrote in his 2012 annual letter to Berkshire shareholders, recounting a conversation with his longtime business partner Charlie Munger...

Despite the compelling logic of his position, I have sometimes reverted to my old habit of bargain-hunting, with results ranging from tolerable to terrible.

It turns out, markets are much more efficient now than they were in Graham's day... Stocks aren't so wildly undervalued anymore. And Graham forged his views in the Great Depression. But the U.S. has seen steady economic growth since World War II. That means a realistic investor must ascribe some value to the future of a business.

You can see it in plenty of Berkshire's portfolio holdings. Buffett's most successful bets are on great companies that are getting better.

For example, Berkshire started buying Apple (AAPL) shares in 2017 when it traded for 16 times earnings. Shares have risen from $35 to $120 and trade for 34 times earnings today.

Buffett started buying Visa (V) in 2014 when it traded for 29 times earnings. Shares have risen from $50 to around $220 today and trade at 45 times earnings.

It's a good thing, too. Over the past few decades, value stocks as measured by pure cheapness haven't done well.

By now, there's little left of Graham's deep-value philosophy... Almost everyone calling himself a value investor today has cheated on the definition. They just mean they won't pay "too much" for growth, not that they'll disregard it entirely.

We don't want to chase trashy speculations higher. The results can be worse than buying bad companies just because they're cheap, like young Buffett did.

But this lesson matters... There's more value in a growing, profitable business than one that trades at a low price-to-earnings or price-to-book ratio.

Editor's note: If your goal is to enjoy a long, prosperous retirement to the very fullest, look no further. Doc's free daily e-letter is your source for investment strategies, financial "life hacks," healthy habits, and contrarian coverage of how the market affects you and your money. Check out the latest stories from his Health & Wealth Bulletin right here.

"The sin of investing... is selling great stocks too early," Doc writes. That's why he uses two simple methods to find – and hold on to – great long-term stock positions... Read more here: The Key to Wealth-Altering Gains in the Stock Market.

Almost everyone you know has probably told you to "buy the dip." But actually buying the dip is tougher than it sounds. That's why you need to focus on aspects of investing you can control... Learn more here: Buying the Dip Isn't as Easy as You Think.

Today’s company shows signs of life in a crucial sector…

Regular readers know that we look to specific businesses to see how the economy is doing. These “bellwethers” provide goods and services that our economy needs to function. So when they’re doing well, a lot of other businesses should be doing well too. Today’s company shows this in action…

3M (MMM) is a $110 billion manufacturing conglomerate. It makes everything… from sprays and adhesives to Scotch tape to N95 masks. And during the pandemic, 3M distributed more than 2 billion respirators across the world, in addition to helping develop vaccines and other treatments. This business is doing well now… In the latest quarter, 3M saw year-over-year growth in all of its business segments, with overall sales growing 5.8% to $8.6 billion. And it returned $3.8 billion to shareholders via dividends and share repurchases in 2020.

As you can see, MMM shares are in an uptrend. They’re up more than 60% from their March 2020 lows. And as this company continues to manufacture the parts we need for economic growth, that trend should continue… 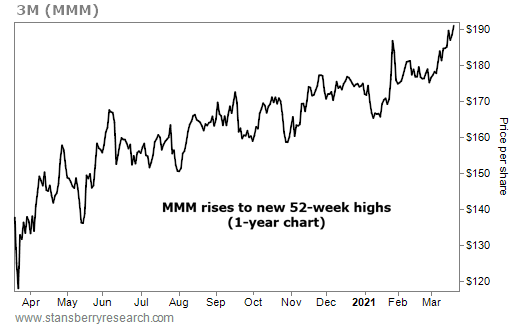