Energy Stocks Are the Best Contrarian Bet You Can Make Today
By Steve Sjuggerud
Tuesday, December 15, 2020

"Wool production, Cactus? You guys have sheep here?" I asked.

West Texas is only a short plane ride from Florida. But as I found out firsthand, it feels like a different world.

Yesterday, I explained what I learned when I visited my friend Cactus last month. I wanted to see the worst energy bust of our lifetimes firsthand. And I left Texas as bullish as I've ever been on an investment idea.

That's because major booms tend to happen after dramatic busts. And that's where we are in the energy market right now.

In late October of this year, my friend Jason Goepfert of SentimenTrader.com ran a headline that read: "Drawdown in energy stocks is the worst of any sector, ever."

Jason prides himself on never delivering the hype – just the analysis. So I couldn't believe he wrote that headline. And he backed it up with data:

The current drawdown in energy is now about 60% more than the S&P's, by far the worst of any sector in history. It exceeds the relative losses in tech after the internet bubble burst and devastation in financials following the Great Financial Crisis.

Wow. In short, investors have given up on energy – and they've deserted it more than any other sector in the near-100-year history of the S&P Indexes. (Read that sentence again, if you would!)

Even today, Wall Street is still completely out of energy stocks. According to the November Bank of America Global Fund Manager Survey, energy is by far the most "underweight" sector in fund manager portfolios relative to history.

You might view this as a negative... But I view it as an incredible opportunity.

That's because buying energy stocks during a crisis can lead to life-changing gains.

In short, these were tough times all around. Yet buying energy stocks in mid-2002 – in the thick of the crisis – was one of the greatest opportunities of the last two decades.

The Energy Select Sector SPDR Fund (XLE) holds the bluest of blue chips in the energy space. I'm talking about companies like ExxonMobil, Chevron, and ConocoPhillips. 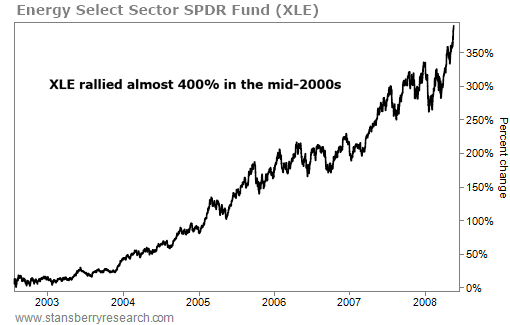 It was a massive contrarian bet... one that few had the guts to make. Yet it was exactly the right call. Energy stocks rallied hundreds of percent over the next six years.

This wasn't the only time this scenario has played out. We saw a similar opportunity during the 2008 financial crisis...

That was the worst economic crisis since the Great Depression. And oil prices also crashed in late 2008, falling 78% in a little over five months.

This is what's possible when you buy energy stocks during a crisis. The biggest gains don't happen after a bad situation is already better... They happen when a market looks terrible, but is actually starting to improve.

In a lot of ways, today's oil crisis is even worse than what it was in 2008. It has been a multiyear gutting, topped off by the devastation in 2020. So today's upside potential could be even larger than what we've seen in the past.

To me, this is the biggest contrarian bet you can make today. And shares of XLE are a simple way to take advantage of it.

If you've got the guts to make the trade, it could lead to massive upside from here.

"Energy stocks are as beaten down and left for dead as they've ever been," Steve writes. And that means we could see life-changing gains in this sector. If you missed Steve's write-up yesterday, be sure to check it out right here: The Worst Energy Bust of Our Lifetimes.

Buying at the bottom – when a stock is most hated – is scary in practice. But staying on the sidelines when an investment is hated can be a huge mistake... Read more here: Major Upside Potential Is Brewing for This Hated Market.

More folks had already been working remotely in recent years… Then, the COVID-19 pandemic transformed the everyday workplace, forcing many employees to remain at home. As the pandemic continues, businesses must rely on technology to help workers do their jobs. And today’s company provides the tech to help businesses adjust to these unique circumstances…

RingCentral (RNG) is a $30 billion global leader in cloud communications. It helps workers stay connected through its cloud-based phone system, video meetings, and team messaging. This technology allows employees to work remotely with ease… which is crucial as the pandemic keeps people at home. And it’s boosting the company’s business as well… RingCentral reported impressive third-quarter results, with $304 million in total sales – a 30% increase year over year.

As you can see in today’s chart, RNG shares are climbing. They’re up 155% from their mid-March lows, recently hitting a new all-time high. And as more workplaces integrate cloud services, this trend should continue… 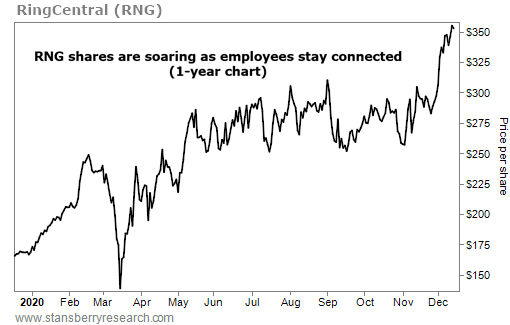