First ARK, Then Cryptos... What You Need If Stocks Crash Next
By Steve Sjuggerud
Tuesday, June 22, 2021

"Cryptos today are like a game of pass the potato," Marc Chaikin told me. "The thinking is, 'If I buy this today, will someone else pay a higher price tomorrow?'"

Marc is actually a believer in cryptocurrencies like bitcoin. He just questions the price...

When any asset soars in price, it can reach a point where the idea behind it doesn't matter. And that can lead to big falls like we've seen lately – first in ARK, and in the crypto market recently.

Yesterday, I shared some of what I learned when I spoke to Marc – a 50-year Wall Street veteran – last month. Today, I'll share more of his insights on how to protect yourself from big potential busts...

There was nothing wrong with them. They were just overpriced.

Marc used McDonald's stock from back then as an example of what could happen to the big names riding today's market fads...

"I think you are going to start seeing that type of thing in today's stocks, like Zoom and Fiverr. They are down about 35% since February. There's nothing particularly wrong with their businesses. They were just overpriced. They could end up like McDonald's in the 1970s."

While the highly speculative stocks and cryptos have sold off lately, the overall markets haven't buckled yet...

We've even seen new highs since. So of course stocks can keep going higher.

Marc specifically pointed to the massive amounts of government spending and our current low-interest-rate environment as reasons why today's asset boom can and likely will continue.

I agree. We're already looking at $6 trillion in government stimulus (or more) since the crisis began. It's an outrageous amount of stimulus for our economy – including continued $300 weekly unemployment checks going out to millions of Americans.

With such extreme government stimulus in place, businesses can keep doing better... and stock prices can keep going up.

But we still need to have a plan for the Melt Down. It's a lesson Marc knows well...

"Without something else, I couldn't protect client assets and I couldn't sleep at night," he said. "So like you with trailing stops, I found an exit strategy to prevent catastrophic losses."

The most critical step you can take today to maximize your upside potential – and minimize your downside risk – has nothing to do with what assets you own.

From here through the Melt Down, the most critical thing you can do for your money is to have an exit strategy in place – and stick to it!

P.S. Marc has created a set of tools to help everyday investors make great buy and sell decisions, based on data. If you want to know more about his specific investment strategy, he recently shared everything you need to know to get started. Click here for more details.

"Investors are euphoric," Steve says. "We are quickly reaching the point where there's nobody left to buy." And as he learned from Marc recently, one point in history closely resembles what we're seeing today... Learn more here.

How should a long-term investor ride the rest of today's Melt Up – and navigate what comes after? Well, you might need an "all weather" approach. Corey McLaughlin walks you through how to prepare right here.

Today, we’re looking at a company that makes our lives easier…

Longtime readers know we like to highlight companies that provide simple solutions to common problems. Instead of hiring an accountant to help file taxes, many people turn to tax-prep software as a convenient way to do it themselves. And today’s company is a leader in this space…

Intuit (INTU) is a $130 billion tax-prep software giant. Millions of Americans rely on its flagship product – TurboTax – in order to do their filings each year. Tax Day is stressful enough, and that stress is compounded by ever-changing tax laws… helping Intuit replenish its customer base every year. Intuit posted more than $4 billion in revenue for its latest quarter, up 39% year over year.

As you can see in today’s chart, INTU shares are performing well. They’re up around 60% over the past year… And they just hit a fresh 52-week high. Intuit’s financial tools show that people are more than willing to pay for convenience… 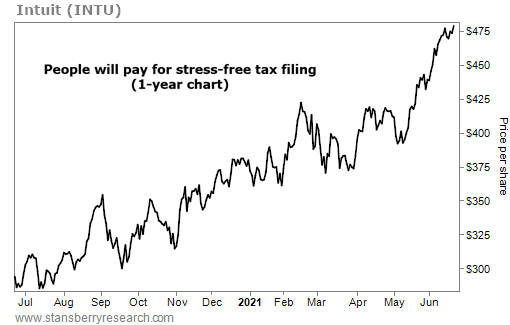