Follow the Billionaires Into This U.S. Sector Today
By John Engel
Wednesday, October 23, 2019 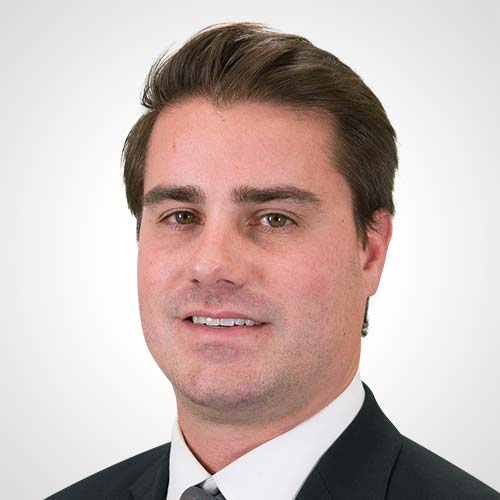 Many of today's wealthiest Americans are following the same playbook...

They're giving away billions of dollars.

This isn't an entirely new idea. As far back as the late 19th century, Andrew Carnegie made "giving back" popular.

Carnegie led the expansion of the steel industry and became one of the richest Americans in history after he sold his steel business to J.P. Morgan for $480 million in 1901.

A year after Carnegie retired, he founded the Carnegie Institute, dedicated to scientific research. More than a century later, scientists around the world are still funding projects thanks to Carnegie's endowment, which represented the bulk of his fortune.

Plenty of other modern billionaires have followed Carnegie's lead – specifically, donating to science...

Like Carnegie, the Gates family is pumping huge sums of money into scientific research. They've formed a subsidiary to their foundation called the Bill and Melinda Gates Medical Research Institute.

Billionaire investor Warren Buffett has joined them. In July, Buffett said he would donate more than $3 billion in Berkshire Hathaway stock to the Bill and Melinda Gates Foundation... bringing his total donations to about $34 billion spread over five different foundations.

Parker is widely known for co-founding Napster, the file- and music-sharing service of the late 1990s. He also served as the first president of Facebook (FB) during the company's developmental years.

In 2015, using $600 million from his own pocket, Parker established the Parker Institute for Cancer Immunotherapy.

The wealthiest Americans are divvying up piles of cash for medical research – and it's flowing into the publicly traded biotechnology sector.

As I'll show you today, there's never been a better time to own biotech stocks...

But before we break things down in the publicly traded sector, you have to understand how biotech companies arise.

Venture capital ("VC") firms typically seed startup biotech companies with their first rounds of funding. It's only after the technology matures that a company launches an initial public offering ("IPO").

That's when VC firms start to cash out.

In other words, before the public invests in medical breakthroughs, the firms that develop them are funded with private VC money. Sometimes, companies receive money from VC funds focused on health care. Other times, they get philanthropic venture funding.

You can use this information to gauge the health of the biotech industry...

VC funding in biotechnology is at all-time highs today. A record $17.5 billion in VC funding went to emerging therapeutics companies last year. Most of that money (70%) went to U.S.-based biotech firms.

VC funding in the U.S. more than doubled between 2016 and 2018, as you can see in the chart below. Arguably, U.S.-listed biotechnology firms are the best place to look for opportunity. They're outpacing every other country combined by a huge margin. 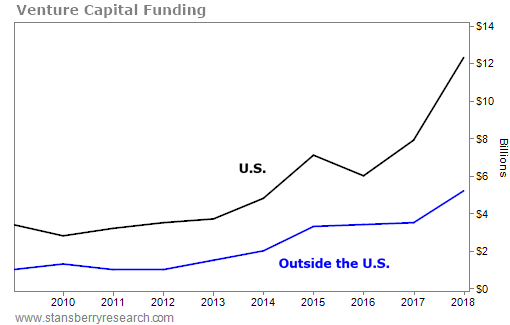 As you'll note in the chart below, the number of U.S. biotech startup IPOs increased from 25 companies in 2017 to 49 last year. 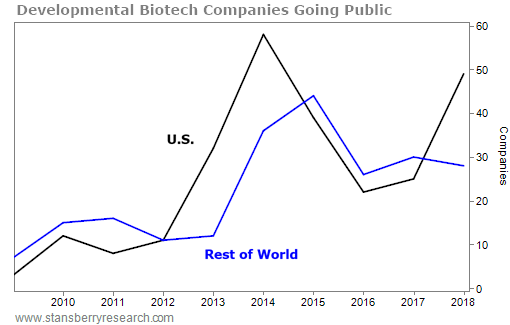 More than half of the companies going public have either Phase II or Phase III experimental drugs in the pipeline.

Most of this funding is flowing into one particular area of disease research...

That metric remained nearly unchanged at 36% for 2018.

Plus, these same trends are reflected in U.S.-based IPOs, where 40% of the startup biotech firms that went public in 2018 were developing cancer treatments. To us, that makes experimental cancer treatments a great place to make long-term investments in the biotechnology sector.

To sum this up, the best opportunities we see in the biotech sector right now are U.S.-based firms developing cancer treatments.

This shouldn't come as a surprise to anyone who reads my colleague Dave Lashmet's work in Stansberry Venture Technology...

I've worked with Dave for the past four years. I've helped him analyze clinical data and the science behind some of his recommendations.

Dave's monthly letter isn't for everybody. His recommendations are often highly speculative. Plus, it's one of the most expensive products we sell at Stansberry Research.

But that should tell you a little something about the value of Dave's work... When it comes to successfully identifying opportunities in clinical-stage biotechnology companies, Dave is remarkably successful.

Since he launched his newsletter in 2015, seven cancer firms in Dave's model portfolio have doubled their share price or more. These positions have made subscribers a ton of money.

For example, in June, I met Dave at the American Society of Clinical Oncology ("ASCO") meeting in Chicago. ASCO hosts one of the largest medical conferences devoted specifically to cancer research.

In 2017, Dave and I found a small developmental cancer therapy firm with incredible data. Dave wrote it all up in his June 2017 issue of Stansberry Venture Technology...

For us, the ASCO meeting isn't just about the science of cancer treatments – it shapes the health care market because these same doctors prescribe drugs.

And the best thing we saw in this meeting is a new targeted cancer therapy from small cancer firm Loxo Oncology (LOXO)...

In the past 16 years that we've been following cancer treatments, we've never seen better drug results against solid tumors.

This isn't a cure for all cancer, only folks with that target. But for those individuals, it's profoundly effective – more than good enough to head straight for U.S. Food and Drug Administration (FDA) approval after Phase II trials.

By January this year – roughly a year and a half later – drug firm Eli Lilly (LLY) acquired Loxo for $8 billion. The deal sent Loxo shares soaring, locking in a 183% gain for subscribers who followed Dave's advice.

Loxo is exactly the type of company that we're looking for. And acquisitions are an important metric to consider when you're analyzing the biotechnology industry as a whole.

Since 2009, there hasn't been huge variation in the total number of acquisitions in emerging therapeutics firms. On average, around 40 acquisitions take place annually. What has changed, though, is the average value of each acquisition... 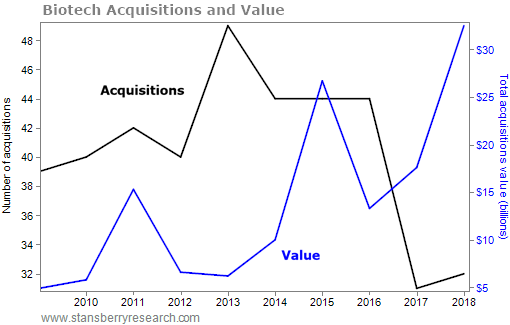 Most developmental biotech firms are acquired when they're in Phase II trials. That's when the first signs that a drug works are presented in the data. Phase I trials only give you an initial inkling of its safety profile.

Unsurprisingly, 10 of the 28 acquisitions last year were those developing experimental cancer treatments.

So what's all this telling us?

It's not easy to wade through heavy information like this. But when it comes to analyzing the market, good information can give you an edge. And the macro analysis paints a clear picture...

Across the board, there has never been a better time to own biotech stocks.

And when you dig a little deeper, you'll see that U.S.-based cancer firms are the best place to find value. They're your best chance to make huge gains on a potential Big Pharma buyout today.

Editor's note: Dave just witnessed a major development in cancer treatment, in person, at a closed-door industry conference. And you want to invest before Wall Street learns about this story... because once the news gets out, you could miss hundreds-of-percent potential gains in the handful of stocks that will benefit most. Get the full details – and access a special discount on Dave's research – right here.

"You need to know a key lesson about patents to succeed in biotech investing," Dave writes. "Because if you're able to catch just one wild success in this sector, it could change your life." Get the details about why these patents are so important right here.

"What if instead of buying the current large-cap winners or a full index, you could simply buy the future winners?" Dave asks. Learn his method for spotting the companies poised for triple-digit gains here: How to Predict Which Biotech Stocks Could Soar 100% or More.

Market Notes
THIS 'BORING' BUSINESS IS UP DOUBLE DIGITS

When we say “boring,” we mean companies that trade novelty for stability. These aren’t groundbreaking firms that are creating new industries. They’re steady, reliable businesses that have years of experience providing everyday products or services. Today’s company proves you don’t need an exciting business to make exciting gains…

Aramark (ARMK) supplies food, uniforms, and service staff to companies and institutions like schools, hospitals, stadiums, and jails. That’s not exciting… But Aramark’s customers will pay big bucks to avoid the responsibility of staffing their cafeterias or washing their employees’ work clothes. The company earned $83 million in profits in the most recent quarter, up 14% year over year.

ARMK shares sold off last year when the company missed earnings estimates. But they’ve recovered to new 52-week highs, rallying nearly 20% over the past year. Aramark may be “boring,” but as the market has realized, it’s a bad idea to count out such a strong business… 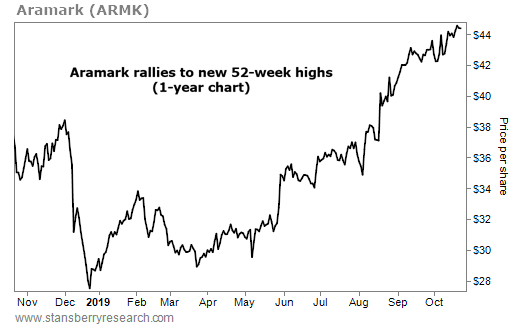