Gold Failed the Inflation Test... But Now, It's Back
By Brett Eversole
Thursday, December 8, 2022

You couldn't have dreamed up such a perfect scenario for gold...

The Federal Reserve printed trillions of dollars' worth of stimulus in 2020. And the federal government joined in, with trillions in spending and direct payments to U.S. citizens. The result was a major bout of inflation.

This should have been gold's moment to strengthen investors' beaten-down portfolios. But it failed the test.

Instead of soaring, gold has fallen this year. And the decline recently reached a never-before-seen level... after gold fell for seven straight months.

The good news is, the worst could be behind us. Gold was up last month. And history shows this could be the beginning of a major move higher.

Gold has a history of booms and busts. It soared for years in the 1970s when we came off the gold standard. But then it was dead money for nearly two decades.

A new boom kicked off in the early 2000s... But that ended in 2011. And the metal has mostly traded sideways since.

Given these major booms and busts, you might not expect seven straight months of losses to be a first. But it is. You can see the recent decline in the chart below... 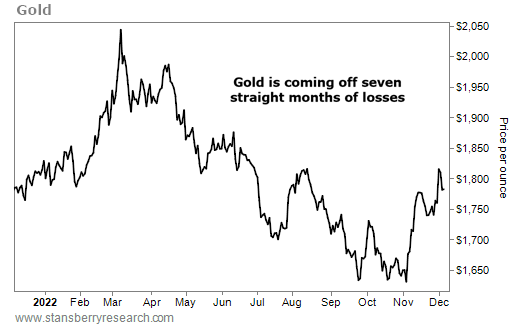 Gold peaked in March and was consistently down, month after month. Normally, you might expect this kind of trend to continue... But when the selling gets this crazy, it can signal a looming reversal.

Since this is gold's first seven-month losing streak, I looked at all cases where it fell for six straight months. That has happened six other times. And each instance was a darn good opportunity to buy...

The metal has been an impressive performer over the past 50 years. Its 7.5% annual gain is about what we'd expect from stocks. But you can do much better by buying gold after setups like this one...

Similar instances led to 6.1% gains in three months, 12.9% gains in six months, and 15.1% gains over the following year. Plus, only one of the six cases led to losses over the next year... while the biggest gain was 40%.

All this points to a major gold rally on the horizon. In fact, it's already underway...

The metal jumped 7% in November – ending the streak of monthly losses. And it's up in December so far too.

More important, history shows the uptrend could continue. And given gold's boom-and-bust track record, it could be a huge long-term rally.

Most folks will completely miss this opportunity. They've given up on gold after it failed the inflation test. But gold isn't dead for good... It's a smart buy right now.

One overlooked market has been beating U.S. stocks in 2022. Investors have written off this part of the world. But it's time to pay attention – because this outperformance could continue... Learn more here.

"Bonds and stocks have both suffered massive losses this year," Sean Michael Cummings writes. Most assets fell in 2022. Even the conservative "60/40 portfolio" has suffered one of its worst years on record. But one little-known strategy did much better... Read more here.