Government Bonds Are Crashing... Here's What Comes Next
By Brett Eversole
Thursday, April 21, 2022

Stocks recorded their worst sell-off since the COVID-19 crash. Commodity prices have soared. And inflation continues to run rampant.

Still, in recent weeks, some of the wildest moves have happened in an unlikely corner of the market... bonds.

Specifically, U.S. government bonds – considered to be some of the safest assets out there – are crashing.

The iShares 20+ Year Treasury Bond Fund (TLT) holds a basket of long-term government bonds. Right now, it's in its second-worst decline on record.

Regular readers know we normally look at big moves as momentum signals... But this is one instance where prices probably can't fall much further. And a double-digit rally is nearly certain, starting soon.

Investment returns generally follow a "risk versus reward" pattern. The riskier an opportunity is, the higher your expected long-term gain.

For example, stocks move around a lot. They're highly volatile compared to other assets. But investors who stick it out tend to reap bigger rewards.

Bonds are the opposite. Investors don't buy them to get rich. They do it to generate stable returns in their portfolios.

Unfortunately, buying bonds hasn't worked out over the past few months...

That hasn't been the case lately. TLT is currently in its second-worst decline on record. The fund peaked on December 3, 2021. And it's down 23% since then. Take a look... 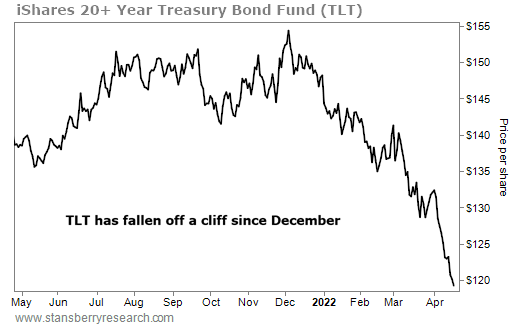 Interest rates have soared in recent months... The 10-year U.S. Treasury yield more than doubled from 1.4% late last year to 2.9% today. That caused a devastating drop in TLT.

A 23% drop would be a big deal even in the stock market. But again, TLT is a boring bond fund. It's not supposed to fall this far, this fast. And historically, it hasn't...

TLT has been around for two decades. We've only seen one worse decline in that time. And it was barely worse than today's decline.

No one wanted to bet on bonds back then. That was the wrong instinct, though... TLT jumped 13% within four months.

The only other time we saw losses close to today's was last year. TLT fell 22% from its August 2020 high through its March 2021 low.

Investors were hugely bearish on bonds then, too. But once again, betting on more losses was the wrong move... TLT rallied 11% in the following six months.

Simply put, TLT has rarely fallen this far. But when it has, a solid rally followed.

The trend in TLT is still down. The fund is currently trading at a three-year low. But this isn't like a stock fund, where no one knows how far prices can fall.

Bonds offer more security and fewer investment unknowns. That means prices can only drop so much. The largest decline on record wasn't much worse than today's... And that was during the worst economic downturn of our generation.

Simply put, we're likely darn close to the bottom for TLT. And when prices reverse, a double-digit gain is nearly certain. That makes TLT a bet to consider once the uptrend returns.

"Sentiment is sour in the bond market," Chris Igou writes. Right now, investors are betting on lower bond prices. And history shows this could be a setup for a short-term rally... Learn more here: Bond Market Bearishness Is Reaching a Tipping Point.

"Speculators are making what seems like the obvious trade," Chris says. But when everyone is betting in the same direction, the opposite is likely to occur. And that gives us an opportunity to profit when the trend reverses... Read more here: Bearish Bets Are Piling Up for Long-Term Bonds.

Today’s company keeps millions of folks coming back each week…

DailyWealth readers know we love “World Dominating Dividend Growers.” These companies boast strong financials and powerful brands that put them at the top of their industries. They also reward shareholders with growing dividends. Today’s company just raised its dividend for the 49th year…

Walmart (WMT) is the world’s largest retailer. Each week, roughly 230 million customers visit its stores, clubs, and websites… shopping for everything from groceries to electronics. Walmart’s competitive pricing keeps folks coming back through good times and bad – and that makes it a financial powerhouse… Last year, the company brought in $573 billion in revenue. Plus, it returned $15.9 billion to investors through dividends and share buybacks.

As you can see, WMT has been in a steady uptrend over the past three years, recently hitting a fresh all-time high. The Stansberry Portfolio Solutions team recommended the stock to subscribers of The Defensive Portfolio back in May 2019… And readers who followed their advice are now sitting on gains of more than 60%. Congrats to the team on a great call! 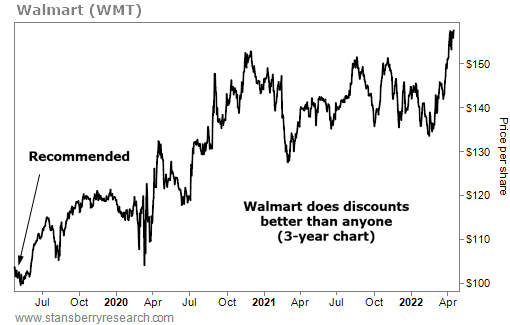