Stocks continue to hit new highs. And the market's current record run is coming from an unexpected source... corporate earnings.

Heading into the current reporting season, analysts were pessimistic. For the third quarter, they expected the earnings of S&P 500 Index member companies to fall 4.6%.

Only a few months earlier, those same analysts were anticipating a 0.6% decline. So clearly, they expected that the negative headlines would be baked into company results.

That turned out to be a blessing, though.

All that pessimism has made it easy for companies to beat estimates. Companies have beaten earnings expectations at a huge pace this quarter.

That's helped propel stocks higher. Plus, there's another reason we could see this rally continue in the coming weeks.

Through the end of last week, 92% of the S&P 500's companies have released earnings. A huge 75% of those companies reported an earnings-per-share beat, versus the five-year average of 72%. Earnings have tended to be 3.9% better than expected.

Sales have also been better than expected, too. So far this season, 60% of companies have reported better-than-expected sales. And those sales have been 0.8% above expectations. The blended revenue growth rate has been 3.1%, picking up steam from 2.8% a couple of weeks ago.

The results caught the market by surprise. But they shouldn't have. During this bull run, analysts have tended to underestimate earnings.

And it looks like Wall Street is setting itself up for a repeat in the fourth quarter.

In October, analysts began lowering their next earnings estimates even further, dropping them by 2.8%. That's below the five-year average decline of 1.7% during the first month of the quarter. Since this summer, analyst expectations for the fourth quarter have dropped from growth of 5.6% to a decline of 1.4%.

Once again, Wall Street's expectations could be overly conservative. It's also worth noting that analysts are anticipating a rebound in earnings growth starting in early 2020. This all bodes well for stock prices going forward. But it's not the only catalyst out there...

Even as the catalyst of earnings beats is removed from the market, another one will replace it: buybacks.

Companies are prohibited from repurchasing their shares in the weeks leading up to their earnings releases. So the end of the reporting season means they can resume buying back shares.

Take a look at the chart below. It measures the performance of the top 100 stocks with the highest buyback ratio in the S&P 500 Index. 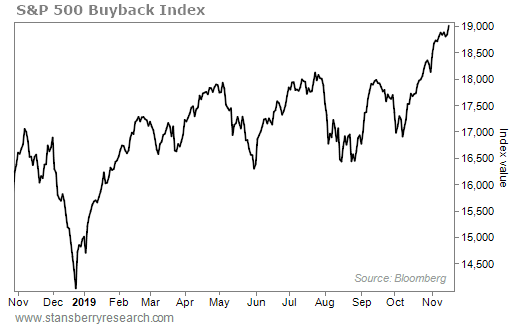 Clearly, owning companies that buy back their own shares is a good thing. And it's positive for the overall market, too.

Consumer-electronics giant Apple (AAPL) is the single largest corporate share repurchaser. It's already announced fourth-quarter earnings, so the company is likely back in the market buying shares. And even though Apple is the biggest repurchaser, it's far from alone.

Based on the activity in the first half of this year, S&P 500 companies will likely buy back as much as $1 trillion worth of stock in 2019. Not only would this break last year's record of $806.4 billion, it would also provide support for the stock market heading into year's end.

In short, negative sentiment is a big reason why stocks have been hitting all-time highs. Most companies have found it easy to beat Wall Street's low expectations. Now, that negativity is setting the market up for a solid fourth quarter... And companies getting back out there to buy shares is another positive.

When you combine the two, it's easy to see why stocks have been hitting – and should continue to hit – all-time highs. And it's why you want to stay long right now.

Editor's note: Be sure to check out Stansberry NewsWire, where Scott and his team cut through the noise and pinpoint what the mainstream media is missing. You'll get access to real-time market updates, expert commentary, tips and tricks, and much more... Plus, your new "information edge" won't cost you a penny. Find out how to sign up here.

"Making money in the markets doesn't have to be difficult," C. Scott writes. With both Wall Street pros and mom-and-pop investors expecting the worst, reality only needs to be slightly better than expectations for the market to make significant moves. Read more here: Wall Street and 'Mom and Pop' Are Both Getting It Wrong.

"Even with U.S. stocks hitting all-time highs, investors are still scared," Chris Igou writes. This year marks the largest flows out of stock funds relative to bonds since the 2008 recession. But anyone sitting on the sidelines during this historic Melt Up has missed out on some big opportunities... Click here to read more.

Market Notes
CYBERSECURITY IS BIG BUSINESS... AND IT'S GETTING BIGGER

Today, we’re checking in on a company that keeps your information safe…

As we store more and more information online, cybersecurity is becoming increasingly crucial. Last year, cybercriminals cost the global economy $600 billion… And the U.S. government has a proposed 2020 budget of nearly $17.5 billion to deal with the epidemic. Today, we’re looking at a leader in this field…

Fortinet (FTNT) is a $17 billion network security provider. It boasts large, well-known clients like Sprint (telecoms), Leidos (defense), Siemens (automation), and Alaska Airlines (travel). In all, more than 425,000 businesses and organizations rely on Fortinet to secure their information. And as security needs keep growing, that’s great for sales… In the most recent quarter, Fortinet reported sales of $547.5 million, a 21% increase from the same period last year.

As you can see in today’s chart, FTNT shares have jumped in the last month. The stock is up about 45% so far in 2019, and it just hit a new all-time high. As long as people need to secure their data, this stock should continue higher…