The housing slowdown entered a new phase this week...

You probably know the story so far: Houses are sitting on the market for longer. Homebuilder sentiment is in the pits. Real estate companies are laying off staff.

Well, more pain is ripping through the housing market. On Tuesday, a major indicator showed that national home prices fell for the first time in a decade in July.

This couldn't be more different than the bull run during the pandemic.

The Federal Reserve is raising rates to slow down inflation. Mortgage rates are soaring. And we've seen the housing market soften as a result. The sector was white hot... But today, it's hitting the brakes.

This may bring back some uncomfortable memories for anyone who lived through the 2008 housing crash...

But history isn't repeating itself. There are some key reasons not to bet on a crash this time around.

We'll talk about one of the big ones today. First, though, here's what's going on with prices...

The S&P Case-Shiller Index monitors home prices in 20 large cities across the U.S. By comparing price changes in repeat home sales, it establishes an overall trend of each market.

The index tracks a variety of desirable places to live, including Miami, Los Angeles, Seattle, New York, and many others. It then folds these into a single number.

Because of its diverse sample size, it's regarded as a good measure of the national trend in home prices. 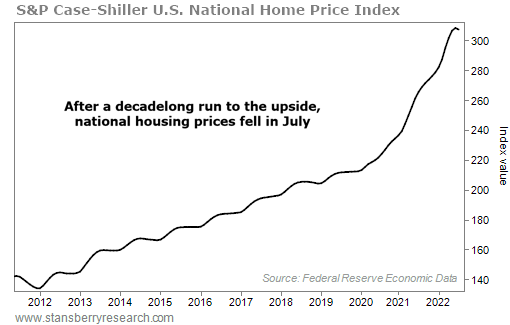 In a year of bearish noise about housing, this is an important story. It means the much-reported slowdown has reached the bottom line.

You might find this unsettling. After all, falling home prices were a hallmark of the 2008 housing crash. But we shouldn't expect a repeat of that crisis.

For one thing, today's housing market rests on a solid foundation.

The 2008 crash had a lot of causes. But a major one was a supply glut... which we got, largely, due to a wave of "subprime lending."

Financial institutions gave out mortgages to people with poor credit, with little regard for whether borrowers could pay them back.

When borrowers were unable to pay, they faced foreclosure. Their homes hit the market as "distressed properties." By the end of 2008, these properties made up 45% of home sales.

The surplus of distressed homes overextended the housing supply, causing prices to crater.

Today, lenders are much more careful...

The subprime level of credit scores moves around with time. But today's subprime scores range from 580 to 619.

The median credit score for a new mortgage is currently 773. In other words, current borrowers are highly qualified. They can afford to pay their mortgages.

What's more, they are paying on schedule. Right now, 99.5% of all outstanding mortgages are paid within three months of their due dates. That's near a record high in compliance.

As long as homeowners are paying their loans, a repeat of the 2008 supply glut is unlikely.

The recent price dip is not the start of a crash. It's a slight repricing now that the Fed is raising rates. Housing may be hitting a speed bump... but don't expect a crash.

Homebuilder stocks are incredibly hated today. The pain in the housing market has driven dollars out of the sector. But history shows that's a contrarian signal – and we could soon see a powerful turnaround... Read more here: Homebuilder Stocks Are About to Soar.

The Fed has been working aggressively to tame inflation, much like we saw in the 1980s. That was a painful time for investors. However, while the economy isn't in the clear yet, we're in a better position today than we were back then – for two key reasons... Learn more here.