A lot of folks, it seems, are preparing for Election Day...

My wife sent me out to get a case of bottled water the other night... "Just in case," she said. In case of what, exactly? I'm still not sure.

Now, I know we have a lot of things to worry about... But I don't think our kitchen faucet going dry or our water getting contaminated are among them – no matter who wins the White House next Tuesday.

But I suppose the point is, folks are starting to get on edge a bit about Election Day... if they haven't been already.

Whether it's for political reasons or because the reported number of COVID-19 cases is rising again, stocks have been selling off this week...

This week, we've been hearing Main Street stories about folks waiting in early-voting lines for more than six hours... people getting confused over the mail-in process at the same time that record amounts of votes have already been cast... drop-boxes being lit on fire... and so on.

In a recent survey, more than half of Americans admitted to stockpiling food and other supplies while gearing up for post-election chaos. At the same time, many of the wealthiest Americans are holed up in the Caribbean or some other remote place.

If things don't go smoothly on Tuesday night or in the days thereafter, should we be surprised? Probably not. But I still think we'll at least have running water.

That's kind of the point I want to make today... We're going to talk about the short, medium, and long term in regard to this whole thing, at least when it comes to stocks.

Our colleague Dan Ferris wrote about this in last Friday's Digest, explaining how elections can be "tradeable events." He talked about the futures markets on the night of the 2016 election, for example...

Futures for the benchmark S&P 500 Index melted down about 5% as it became clear Trump was winning states everybody thought Democratic nominee Hillary Clinton would win. Likewise, the Mexican peso futures melted down 10% or so (if memory serves)... since everyone knew Trump didn't like the North American Free Trade Agreement and wanted to renegotiate the agreement.

By the next morning, though, the S&P 500 losses were gone... I remember someone posting on Twitter: "Best. Crisis. Ever."

There are some themes worth considering in the medium term, too, if history is any indication...

Stansberry's Credit Opportunities editor Mike DiBiase and Stansberry NewsWire editor C. Scott Garliss recently crunched some numbers on what election results mean for stocks and the economy (and vice versa) that gave us a few things to think about.

Given that Democratic challenger Joe Biden is ahead in many pre-election polls (if you are to believe them), Mike and Scott looked at the average performance of stocks – as measured by the benchmark S&P 500 – in the years after there was a change in office from 1932 through today.

Here's what they discovered about when someone from the challenging party takes the White House... 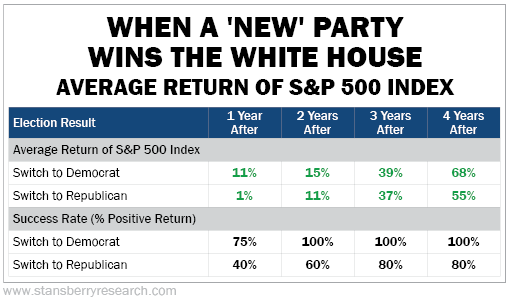 Now, before we go any further, we'll be the first to tell you that history sometimes indicates a critical takeaway... and sometimes doesn't. You never really know until you have the power of hindsight.

And again, remember that we're talking about "average" numbers in this analysis. But we can still use this as a rough guideline for comparing possible outcomes.

If you look closely, you'll see that the numbers reveal a mixed bag about the medium term...

If you're a supporter of President Donald Trump, you might not like this... But over the long run, the numbers lean toward "change is good" this time around.

In general, historical data from 1926 through 2019 show U.S. stocks have outperformed by an average of roughly 5% per year during Democratic administrations, compared with Republican administrations.

And over all four years of a first-term presidency, stocks have returned 68% after a switch to a Democrat.

But if you're interested in just a slightly different timeline, you might want a different outcome than a win by Biden... because the S&P 500 has tended to do significantly better in the first three years of a two-term presidency.

According to Mike and Scott, when there is no change in office, the benchmark index goes up 50% on average over the next three years, compared to 38% if there is a change.

It's only during the fourth year of a "switch" presidency to a Democrat where things really start to take off, on average, for the S&P 500. But again, there are all kinds of contributing factors to stock market performance in any given period.

So we'll pause right here on parsing the data to focus on a couple of clear takeaways...

This is consistent with our belief that stock market performance tends to predict elections, not the other way around. As we wrote in the Digest back in September...

Over the last four decades, the S&P 500's performance in the three months prior to Election Day has accurately predicted who wins in November every time. And since 1928, this indicator has been accurate more than 85% of the time.

In the 22 presidential elections since 1928, 14 were preceded by gains in the three months prior. In 12 of those 14 instances, the incumbent (or the incumbent party) won the White House.

Conversely, in seven of the eight elections preceded by three months of stock market losses, incumbents were sent packing. Right now, it's unclear who the odds favor.

Depending on if you use July 30 or July 31 as your starting point, the S&P 500 either is up 0.7% or just about breakeven through yesterday's close, respectively.

In any case, there is another important factor to consider. As we said in the September 23 Digest...

History also favors an incumbent winning – except if a recession has happened during his term.

Since 1932, an incumbent president has never failed to win reelection unless a recession has occurred during his time in office. As you know, that's what we've got this year.

So, this is just a long way of saying we might have already seen the greatest influence of the election on the broader stock market, especially for long-term investors, and vice versa.

As we've said before, in the long run, greater forces are at work...

A presidential election is just one of the many things investors take into consideration on any given day.

This is probably why there has been no clear trend for stocks over the past 100 years based on the president or the makeup of Congress, either – whether Democrats or Republicans control the House of Representatives and Senate, or if there's a split in party control.

Similarly, in times like this, it's valuable to look for the "surer things"... things that aren't going to change.

This coming Tuesday, we'll know – at least in part, hopefully – whether the Electoral College map will be "red as hell," as President Trump likes to say, or if a "blue wave" has hit the country like another hurricane.

But either way, our editors see a few constants playing out over the next four years and in the long term...

The "Battle for America" is on, as is the battle for the "soul of money"...

There is no end in sight for dangerous amounts of more money-printing, deficit spending, and greater devaluation of the U.S. dollar...

The Federal Reserve has signaled low interest rates for the next few years, a strong tailwind to the housing market and a challenge for investors looking for decent yield...

Data are becoming more like the "new oil" every day...

And as you have heard from Steve, the Melt Up is happening... and it will be followed by the inevitable "Melt Down."

Science and technology stocks have never been more in the spotlight in recent memory than in 2020. And infrastructure spending, in some form, is going to be important, too.

These things are happening no matter who is in the White House... That's what should matter most for long-term investors. Yet at the same time, as we started today, we must still think about the short term – like the amount of bottled water in my basement.

And we know that "it doesn't really matter in the long run" isn't a satisfying answer for folks who are looking to make the most of their money today.

So with all this being said, it's a prime time to prepare your portfolios for the "election aftermath"...

That's why we recently shared a special "Election 2020" briefing, featuring former presidential candidate Dr. Ron Paul. He joined us to discuss why higher taxes could be on the way... what the ultimate "end game" is for all this... and what you should do with your money to prepare for the coming months and years.

It was also a chance for Stansberry's Director of Research Austin Root to release our new election solution for all investors... a fully allocated model portfolio of stocks.

This portfolio is unlike anything we've ever published at Stansberry Research. It covers recommendations that should do well in either outcome. And it even shows you what stocks to invest in depending on which candidate wins.

So if you missed the briefing, make sure you catch it while it's still available... and learn how best to position your investments in the weeks, months, and years ahead.

Editor's note: Austin's new product is designed to help you profit post-election. He and our portfolio team have put together a list of stocks to own right now with confidence – and they have even more stocks at the ready depending on who wins. Now's the time to protect your wealth... and grow it for years to come. Click here to learn more.