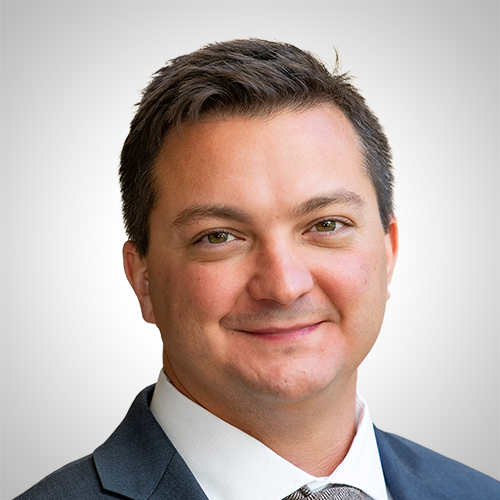 We had a shot to fix finance...

But we missed it.

You begin the morning doing a little work... staring at four trading screens with your feet up. Then, you choose whether to drive your Ferrari or your Bentley to the beach club, followed by a cruise on a yacht with friends.

Later in the day, you do some watch shopping, make a couple TikTok videos, then have dinner, served by your personal butler, by the pool.

This is one of thousands of similar videos you can find on "FinTok" – a community that has sprung up on the social media site TikTok that offers tips and tricks to get rich quick...

Most of FinTok is hype. It shows clips of kids who look 17 standing in front of digital backgrounds of six trading screens, acting as if it's their real work environment.

Then they go "supercar" shopping. Others share photos of themselves on private jets... which are likely taken on studio sets that you can rent for Instagram photo shoots.

When the FinTok videos do discuss finance, the facts are dead wrong...

One famous FinToker revealed his system in a video. Standing next to his wife or girlfriend, he explains...

Here's my strategy in a nutshell. I see a stock going up, and I buy. And I just watch it until it stops going up, and then I sell it. And I do that over and over, and it pays for our whole lifestyle.

Thanks for the tip.

Another has built a following claiming that maxing out a 401(k) is the dumbest thing you can do with your money.

I am a professional equity analyst. My day involves a lot more spreadsheets than these FinTok jockeys seem to deal with. And as I said, we almost fixed finance in America... However, this is where we ended up.

Before FinTok, Wall Street was the villain...

Wall Street has long been criticized as a scheme for turning ordinary people's money into investment bankers' wealth. You may have heard the anecdote that starts Fred Schwed's 1940 book subtitled A Good Hard Look at Wall Street...

An out-of-town visitor was being shown the wonders of the New York financial district. When the party arrived at the Battery, one of his guides indicated some handsome ships riding at anchor.

He said, "Look, those are the bankers' and brokers' yachts."

"Where are the customers' yachts?" asked the naive visitor.

And Wall Street partly deserved this image. For decades, we saw individual investors paying 2% and 3% annually on the amount of their money their broker held under management... plus front-end loads (or payments) for mutual funds that lagged the markets.

We saw brokerage commissions of more than $50 a trade and demands to trade round lots of 100 shares... We saw complex financial instruments designed to hide fees from confused customers.

But starting in the mid-1990s, we saw a democratization of investing. 401(k)s became mainstream, allowing savers to control their own retirement accounts... Online discount brokers cut commissions to $10 or less... Internet sites began to provide instant and trustworthy financial data.

That wave inspired an army of day traders who drove the dot-com boom. But like today's FinTokers, they got intoxicated by easy money. The bubble burst... And the traders, for the most part, went away.

Following that bubble, index funds led to the next wave that empowered everyday investors. These funds roughly tracked the market's returns for drastically lower fees. From 2000 to 2010, the assets in index funds more than quadrupled... and then quadrupled again from 2010 to 2020.

That meant no more fees for underperformance or high front-end loads on mutual funds... And with a simple exchange-traded fund ("ETF") portfolio, investors didn't need to pay expensive advisers.

But it turns out, folks aren't satisfied with just "average" returns. While index funds are still popular, people are increasingly getting into active investing.

That coincides with efforts from financial technology ("fintech") companies to democratize finance even more... Led by Robinhood and other brokerages, trading commissions have been cut to zero, and margin lending is widely available.

It seemed an admirable goal. But it turned investing into a game. And this "gamification" of trading led people to overtrade.

Then, the pandemic kept people locked at home with plenty of time to play the market... And play they did.

Worse, cryptos and non-fungible tokens (NFTs) exploded... Today, more and more people feel that financial speculation is the way to get rich, because "everybody's doing it."

All this together has led to an entire class of people who are under-researching, overtrading, and winning and losing vast sums of money.

Alongside the FinTok "stars" showing off rented wealth, you can watch videos of blowups... screenshots of accounts that lost six figures in a day.

We followed one FinToker who posted a catastrophic tale over several months. He quit his job and put all his money ‒ all his savings and IRAs ‒ into bitcoin... (I'd argue that he could have kept his job and still bought bitcoin, but let's not go there.)

Bitcoin fell, and he took a big loss. He started using trading coaches he discovered on social media. They suggested using leverage to earn back his losses. But although bitcoin is up over the last year, leverage can work against you even if an asset goes up. He got wiped out.

He moved back in with his father at age 45 and got a job as a waiter. And you can find many sad tales out there like this one.

America broke free of Wall Street's fees... But it left behind the level-headed guidance those fees brought with them.

The answer is somewhere between Wall Street's exorbitant fees and the hubris of a 20-year-old whose advice is to sell when the stock stops going up.

There is a better way...

If you combine the tools of modern finance – low commissions, abundant information, and low-cost ETFs – and pair them with solid, independent research... you have found the secret sauce of smart, self-directed investing.

Editor's note: Last night, Matt, Steve, and Dr. David Eifrig sat down to share the No. 1 step they're recommending you take – right now – to allocate your money effectively. It all comes down to an approach that has crushed the market for five years... If you're looking for the Stansberry "recipe" for informed, self-directed investing in 2022, make sure you catch the recording of their discussion. You can find it right here.

The stock market has a history of sucking in lots of unsuspecting participants on the way up. And while most of these folks will get wiped out on the way down, you still want to participate in the Melt Up as they push stocks higher... Read Steve's two-part essay here and here for more.

With the volatility of the past two years, trying to predict what will happen next is only putting your portfolio at risk. But today, one indicator is giving us a signal about what to expect – and how to prepare... Read more here: What the 'Bear Flattener' Tells Us Today.

Regular readers know that when a company’s shares plummet, you don’t need a complete turnaround to make money. You just need things to get “less bad” than they were. Today’s company is a great example…

Devon Energy (DVN) is a $35 billion oil and natural gas exploration company with operations focused in Texas and the Central U.S. Investors fled from Devon due to industrywide pricing pressures as well as production troubles at some of its sites. But the company solved those troubles, and fuel prices have soared. The combination, along with a recent merger, sent Devon’s free cash flow 8 times higher year over year to $1.1 billion in the most recent quarter. And the company recently increased its dividend by 71% to $0.84 per share.

As you can see, DVN shares are turning around. While they’re still less than half their 2008 peak value, they’ve exploded nearly 1,000% from their low (including dividends) in less than two years. And they recently hit a new multiyear high. That shows what can happen as things get “less bad”… 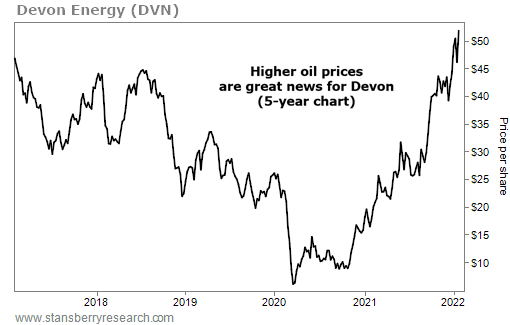