How the 'Melt Down' Begins â And Why It's Not Here Yet
By Steve Sjuggerud
Tuesday, October 30, 2018

Jim – if you don't know – might have the best track record of any investor alive...

During the 1970s, his Quantum Fund delivered a 4,200% return to his investors. That was during a time when stocks did nothing.

Then in 1980, at the peak of his fame and performance, he walked away on top.

With a 4,200% track record, you know that Jim looks ahead at all of the possible economic and political outcomes – and their investment implications. He tries to determine the most likely outcome... and how to profit from it.

So when Jim shared how he thinks the Melt Up – the final blow-off top of this historic bull market – might play out from here, I was eager to listen.

Today, I'll share his thoughts, and what it means for your money right now...

Jim's script for the end of the Melt Up starts and ends with the trade war with China...

Before we get into it, I want to tell you in advance that Jim is not a Democrat or a Republican. He is more of a Libertarian, and equally at home bashing both sides of the aisle.

He picks on President Trump in his Melt Down script – but please, don't dismiss him as some nutty socialist. He is for less government intervention, and with that, less protectionism.

You can watch a full clip of Jim's thoughts right here. And here's a simplified version of what he told me in Beijing:

What I expect to happen is, somewhere along the line, Mr. Trump or somebody is going to say, "OK. We solved the [trade war] problem." Whether they have or not, they're going to say they've solved the problem.

That may lead to your Melt Up. Everybody's going to say, "OK. We're safe. We're safe. That guy Steve was right. We'll have a gigantic last move in the market."

Then, when things do start going wrong for real... then we're going to have the real trade war.

If Trump comes in at that point and says, "We're going to show them I'm smarter than they are. We can beat them, and we will beat them." Be worried. Be very worried. Nobody's ever won a trade war...

That may lead to your Melt Up and then your total collapse. I told you the next bear market's going to be the worst in my lifetime. That would be what's going to do it.

Jim didn't earn the huge returns he's known for in his Quantum Fund without properly evaluating the possible outcomes and betting on them. It won't surprise me at all if he turns out to be right.

I've spent years coming up with similar investment "scripts" for how turning points might develop in the markets. It's worked well for me. And right now, I believe we still have plenty of time – and plenty of upside potential – before Jim's scenario could play out.

Investors are still worried about the trade war with China. They haven't let their guard down and rushed back into stocks... Far from it.

Stocks took a beating this month. And investors' fears about trade wars and tariffs were a big reason for the pullback.

So what does this mean for your money today?

In short, you don't want to miss out on the Melt Up because you're worried about the Melt Down.

The biggest gains will happen when everyone finally feels safe... and the euphoria kicks in.

We still haven't seen this yet. And we need to take advantage while everyone is still afraid of the markets. That means owning the tech and biotech names that have tended to soar in the past during major Melt Up booms.

The Melt Down will get ugly... But we're not there yet.

P.S. This boom still has plenty of room left to run. That's why just last week, I released a complete portfolio of nine recommendations to take advantage of it. I fully expect this group of stocks to double or more as my Melt Up "script" plays out... In fact, I'm so confident, I'm making a unique guarantee. Click here to learn more.

"The same economic forces that are propelling our stock market and economy higher and higher will eventually lead us into a spectacular bust," Porter Stansberry writes. Read more about his three key warning signs for the end of the Melt Up right here.

"You don't want to wait until stocks start soaring... and THEN decide to get in," Steve says. Learn why sitting on the sidelines can be deadly to your returns here: The Best Days of the Melt Up Are Coming.

Market Notes
A CASUALTY OF THE 'CORD CUTTING' TREND

Today, we highlight a company that’s feeling the pressure as TV viewers change their habits…

Tracking big, secular trends is a great way to spot the winners and losers in a changing industry. These days, more families are ditching cable-TV packages in favor of lower-cost streaming alternatives like Netflix (NFLX). This is terrible news for businesses built on traditional cable…

Just look at TiVo (TIVO). The $1.4 billion technology company makes TV-recording devices so you can catch shows anytime (and skip the commercials). But recent trends are not working in TiVo’s favor… Research firm eMarketer predicts a 33% jump in cord-cutting this year. That’s 33 million Americans walking away from cable. Plus, the company’s latest device for streaming aficionados – the TiVo Bolt OTA – costs consumers a hefty $250. For comparison, a Roku streaming player starts at about $30.

As you can see, TiVo’s stock is trending down. Shares have fallen more than 40% over the past year, marking a new 52-week low. As more Americans migrate to cheaper streaming platforms, businesses like TiVo will continue to lag… 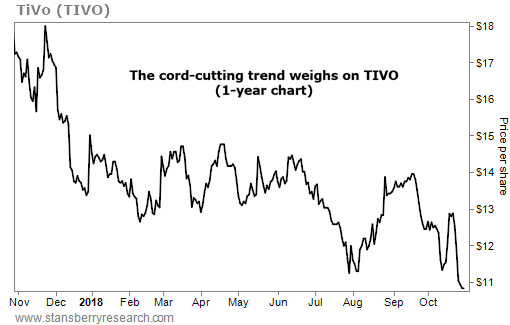