How to Avoid the Metaverse's Next Collapse
By Marc Gerstein
Tuesday, March 29, 2022

Editor's note: Last year, investors forgot that losses are a normal part of investing. They've had to remember it in 2022. You can use a few specific tools to protect yourself, though... And they're crucial in today's volatile market. Today, we're sharing one from our corporate affiliate Chaikin Analytics...

Anybody who thought the metaverse would be paradise just got a rude awakening...

On February 3, metaverse pioneer Meta Platforms (FB) plunged 26%. It was the social media stock's biggest one-day drop ever – even worse than the 19% decline it suffered in July 2018.

Meta released a bad earnings report. Even worse, it projected weaker-than-expected revenue growth in the next quarter. And its Facebook platform suffered its first-ever membership decline.

Stock implosions happen. But while the metaverse's central idea – augmenting reality with virtual spaces – might sound far-fetched, Meta is a tech titan. A lot of folks got burned on this one... and never saw it coming.

After more than 30 years in finance, I've learned that there are two kinds of investors: those who've endured and learned from Meta-like pain... and those who haven't.

So today, let's get ahead of the metaverse's next collapse. To do that, we must consider what you can do to minimize your exposure to this sort of trouble in the future...

Let's start with Meta's price chart, as well as some of the most important components at the heart of the Power Gauge system that powers Chaikin Analytics. Take a look... 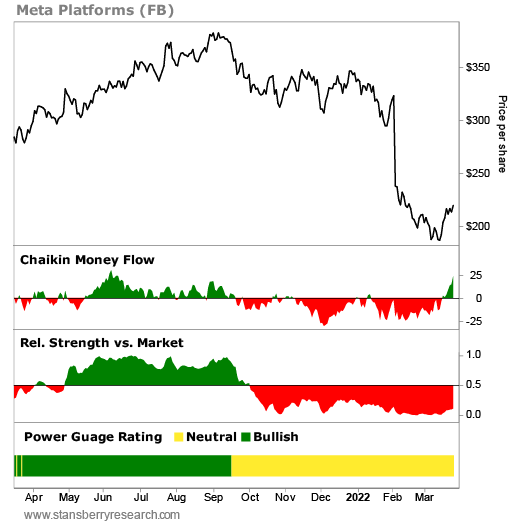 We'll go from the bottom to the top for this breakdown. The visual setup is simple... For the Power Gauge's components under the price chart, green is good, red is bad, and yellow is in the middle.

The panel at the bottom shows our Power Gauge's overall ranking for Meta over the past year. It's "neutral" now... But notice the change from green ("bullish") to yellow in September. We'll come back to that.

Next up is Meta's relative strength compared with the SPDR S&P 500 Fund (SPY) – the exchange-traded fund that tracks the benchmark index. This panel shows whether the stock is beating SPY (green) or lagging it (red).

This is extremely important... Wall Street always has a reason for doing what it does. That's true whether we approve or not – or whether we can figure out the reason at all. If a stock is underperforming the benchmark index, that's a bad sign.

Now, notice that this band has been red since late September – and in a big way, too. It's a longer, bolder stretch than the tiny, tentative bit of red last spring (near the left edge).

The timing of the switch matters, too. Relative strength went abruptly from deep in the green to deep in the red... at roughly the same time that the Power Gauge changed from bullish to neutral. That means something.

At Chaikin Analytics, we call this type of setup a "personality change" for the stock. And in this instance, it was a change for the worse.

The next panel up is the Chaikin Money Flow. This indicator introduced the Chaikin brand to Wall Street years ago. And these days, it's seen on Bloomberg Terminals everywhere.

As you know, every trade has a buyer and seller. The Chaikin Money Flow tells us which side of the trade the "smart money" is taking. They're the big guys in the investing world, so we always want to know what these institutional investors are up to.

This indicator also shows us how motivated the smart money is to say, "OK, enough price haggling, I just want to get this trade done now." We can see that happening when the line is deep in the green or red section. It's proof that the smart money is buying or selling in a big way.

We expect the Chaikin Money Flow to regularly alternate between green and red. That's because the smart money is always adjusting its portfolios. (Sometimes, these folks still love a stock, but they sell some shares to diversify and make room for other great ideas.)

In Meta's case, you can see that the Chaikin Money Flow changed around the time that the stock underwent its personality change. And it didn't just turn red... It went red with attitude.

Finally, don't forget to look directly at the stock's price action. After the first decline in September – when all the readings changed – shares kept making lower lows over several months before the big drop.

No matter how you calculate the long-term trend, the answer is clear... Mr. Market has been shouting, "I hate FB shares!" since last fall.

Chart analysis isn't voodoo. It's about following signals – like a fire alarm.

A fire alarm doesn't always mean the building is on fire. But you don't stick around to find out... You run to safety first. And you look for the reason the alarm went off later.

Folks who ran at the Meta's first warning signal last fall would have found plenty of reasons once the smoke cleared... The company has been plagued by whistleblower allegations, ongoing controversy over data use, congressional scrutiny, and more.

Don't risk exposing yourself to flames when an alarm sounds. Run to safety, then take the time to investigate further. If you decide it's a false alarm, you can always rebuy the stock.

If you learn to follow this approach, you'll be much better off in the long term.

Editor's note: Tomorrow at 8 p.m. Eastern time, a Wall Street legend who accurately predicted the most devastating stock crashes in 2020... is stepping forward to reveal a strange event that's coming to the market. Tune in online for the details, including the No. 1 worst stock you could possibly own right now, and the name and ticker of the stock you should buy instead... Click here to reserve your free spot.

"When times get tough, our intuition tells us to do more," Steve writes. But as an investor, doing more can be terrible for your portfolio... Get the full story here: Now Is Not the Time to Tinker With Your Investment Strategy.

It can be tempting to sell when market conditions are uncertain. But this crucial idea can help you reduce your margin of error when everyone else is running for the exit... Read more here.

Our colleague Dr. David Eifrig has long been bullish on the health care sector. As the Baby Boomers get older, they’re spending more on doctors’ visits and medicines… which means health care stocks should see massive gains. Today’s company is part of this ongoing trend…

Bristol-Myers Squibb (BMY) is a $160 billion pharmaceutical behemoth. It makes essential medications for seniors, from cancer drugs like Opdivo and Revlimid to rheumatoid arthritis treatments such as Orencia. The company is also working on a treatment for hypertrophic cardiomyopathy (a type of heart disease)… And the Food and Drug Administration just approved its new immunotherapy to treat advanced skin cancer. Sales continue to rise for Bristol’s critical medications… The company posted more than $46 billion in revenue for 2021, up 9% year over year.

As you can see in today’s chart, BMY shares have been grinding higher. They’re up more than 65% from their pandemic lows (including dividends), and they just hit a fresh 52-week high. As Americans age, this health care giant should continue to benefit… 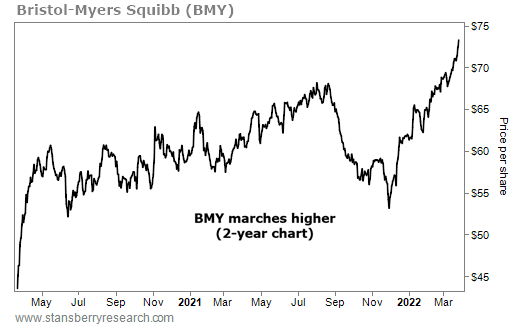