How to Become Friends With Your Heroes
By Steve Sjuggerud
Wednesday, December 26, 2018

Editor's note: This week, we're sharing some of Steve's best tips on how to live a rich personal and professional life. Yesterday, he shared how to build a career you never want to quit. Today, he explains how he has gotten the opportunity to work with some of his heroes...

"You're so lucky, Steve... You've gotten to meet and work with all these famous guys... "

When I hear that, I usually say something like, "Yeah, it's hard to believe... I have been pretty fortunate!" And I leave it at that.

But the truth is much different... It's NOT luck. It's NOT good fortune.

There's a secret to doing what I've done. And I will share it with you today...

Maybe there is a bit of "luck" involved... But it didn't happen without me putting myself in luck's line of fire. Let me give you an example of what I mean...

A while back, I knew I was going to have the chance to shake hands with one of my heroes.

When I met him, I could have just said, "Uh, gee, it's nice to meet you. I'm a big fan." But that would have been a missed opportunity.

Instead, I spent a few days thinking before I met him. I came up with a plan to make an impact – to give him a chance to want to get to know me...

I got out a 3-by-5 note card. And I wrote out what I called "12 Ways to Take Over Your Industry." I included my name, phone number, and e-mail address. When I shook his hand, I smiled and handed him the card. And that was that...

Instead, he reached out to me... In the end, he tried all of my dozen ideas, except one. Now, when he wants a second opinion on something (outside of his corporate yes-men), he sends me an e-mail or gives me a call. And he has included me in events around the world and decisions that I've been grateful and flattered to be a part of.

The best part, to me, is that I can call a hero of mine a friend as well.

That didn't happen because I'm "lucky." It happened because of a simple secret. There are two parts to it:

Then you're off... At that point, you have done your best to kick off a potential legitimate friendship.

I often had to create these moments. Usually, they don't just happen.

For example, a few years ago, I ended up on the phone with another hero of mine. He said, "Next time you're in Nashville, give me a call and we can get together." Look, I'm NEVER in Nashville... But I went to Nashville that week. (I re-routed a flight to have a long layover there.)

I made it happen when the opportunity came up. And it was a fantastic few hours. Another hero of mine is now a friend of mine, too.

Most of the time, it doesn't work out this way. But it's 100% worth trying... Your downside risk is a little wasted effort. Your upside is a legitimate friendship with one of your heroes. That's worth it to me!

You can do it. You have to get creative to create the opportunity. You have to offer something that benefits your hero. And you have to do it without asking for anything in return.

You have to create your "luck."

It has worked for me. I have been able to get close to many of my heroes – both in business and in my hobbies. And I believe it can work for you, too...

How cool is it to have your heroes as your friends? Just follow these tips, figure out your opportunity, and go for it... You can do it...

"Never loan money to your friends," Steve says. "It's a good way to lose your money... and your friend." Find out how he learned this valuable lesson about life and business right here: Why I Forgave a Big Debt.

"Maybe I'm lucky," Mark Ford writes. "Or maybe it's just common sense." Learn more about how to apply just a little bit of common sense to make a difference in your investments – without counting on good fortune – right here.

Today, we’re looking at another victim of the “retail death spiral”…

Largely thanks to e-commerce giant Amazon (AMZN), today’s consumers prefer to shop online instead of flocking to the mall. And while some traditional, brick-and-mortar retailers are adapting to their customers’ changing behavior, some companies are getting left behind…

Michael Kors (KORS) is an unfortunate example of the latter. The $5 billion global luxury brand makes and sells handbags, sunglasses, and more under its widely-known Michael Kors brand. But the company is struggling to grow its sales. In the most recent quarter, Michael Kors reported sales of $1.25 billion, missing analysts’ estimates. The company also saw comparable store sales – a critical number for retailers – fall by 2%.

As you can see in today’s chart, KORS is trending lower. Shares are down more than 40% over the past year, and they recently hit a new 16-month low. If this company doesn’t adapt soon to an increasingly digital market, we could see more pain ahead… 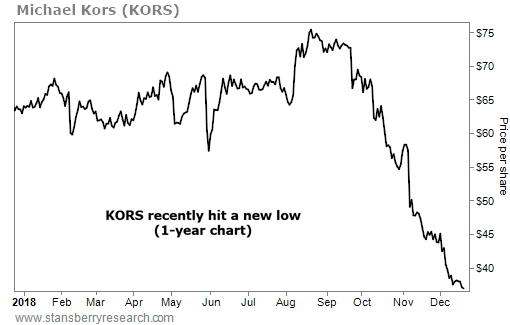