How to Find the Next Apple, Microsoft, or Netflix
By Whitney Tilson
Saturday, August 6, 2022

Editor's note: This Weekend Edition, we're taking a break from our usual fare to share an essay from Whitney Tilson, the founder of our corporate affiliate Empire Financial Research. In it, he shares how he discovered today's biggest tech behemoths before they took off for huge gains... and why "hyperscalable" companies are your ticket to outsized returns.

Longtime readers of my work know the story of how I discovered Amazon (AMZN) before it became the trillion-dollar behemoth we know it as today...

These investments were one of the reasons I was able to grow my hedge fund from $1 million in assets in 1999 to more than $200 million at its peak.

In today's essay, I'll show you exactly how I spotted these future moonshots before they became the mega-cap blue chips we know them as today.

Apple, Microsoft, and Netflix all share one common trait: They're extremely "hyperscalable"...

Let's look at Apple first. When I bought shares at a split-adjusted $0.35 per share, legendary founder CEO Steve Jobs had returned to the struggling company, which had recently launched its iMac desktop computer. This was years before iPods, iPads, iPhones, AirPods, and the App Store ever existed.

But I knew Apple was special at the time for a number of reasons:

Plus, Apple had the ultimate "wild card" in the form of Jobs. He was a genius and a visionary... And he deserved the lion's share of the credit for engineering Apple's comeback.

Jobs (sadly) passed away in 2011, but Apple continues to execute brilliantly...

The iPhone basically put the nail in the coffin of its top competitor, BlackBerry (BB). It saw its market cap crater from $64 billion when Apple released the first iPhone in 2007 to around $3.8 billion today.

Apple is the prime example of the "network effect" at work: The value of its products and services increases as more people use them.

The more users there are to download apps, the more developers want to create apps for those users, and so forth. That's why Apple's App Store revenues have ballooned from $39 billion in 2017 to $85 billion last year.

That's what I mean when I say these companies are hyperscalable.

It was the same case with Microsoft, which I first bought in mid-2010 before it went on to be a 17-bagger...

Despite controlling more than 90% of the world's operating systems and sporting rising profits, Microsoft's stock had fallen sharply.

Investors were worried that the company was losing to Google in search engines and would lose market share in personal computing to Apple. Plus, its hardware business was struggling.

But backing out its nearly $40 billion pile of cash, MSFT shares were trading for just 8 times earnings. As I told a reporter from Reuters at the time, "That's insanely cheap for a company of this caliber and market position."

A few years later, Microsoft transitioned to a Software as a Service model, meaning that it charged a few bucks a month in perpetuity for access to the Microsoft Office suite.

That allowed Microsoft to become extremely hyperscalable... It didn't really cost the company anything extra whether it had 1,000 subscribers or 1 billion subscribers. And like Apple, as more and more people used Word and Excel, others wanted to share the compatibility, leveraging its network effect tremendously.

Netflix took a similar path to stardom as Microsoft... 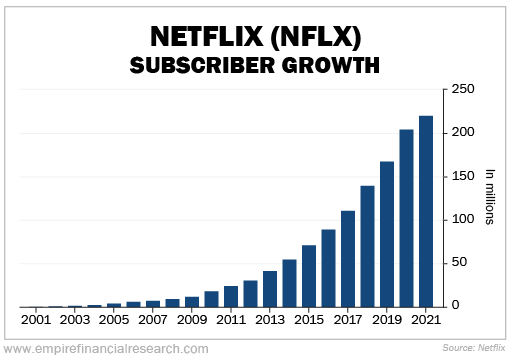 In the process, Netflix put Blockbuster Video out of business entirely. But as we saw with Apple and Microsoft, Netflix didn't take a smooth ride up, either.

In an ill-fated strategy, the company separated out its DVD-by-mail business from its streaming business and gave it a new name – Qwikster – forcing people to subscribe to it separately.

Netflix customers revolted... The company lost 800,000 subscribers in that quarter alone. And in less than a month, CEO Reed Hastings walked back the decision.

But the damage was done. Netflix went from growing 30% year over year to just above 10% for three quarters. Its stock price fell from $43 per share to less than $10 per share.

I was famously short Netflix at the time and even published an article titled, "Why We're Short Netflix"...

That prompted Hastings to publish an article of his own, titled "Whitney Tilson: Cover Your Short Position. Now."

He and I connected through e-mail, and he invited me to brunch at his house in California where he helped me realize I was looking at Netflix with a completely wrong lens...

I was looking at how many people were paying $8 per month and trying to figure out how much each subscriber was worth. Instead, Hastings explained that Netflix's streaming platform was already built... and it was now enjoying the network effect as more and more people were using it.

I immediately closed my short and, after the stock fell sharply, backed up the truck on Netflix shares. I went on CNBC the exact day Netflix bottomed following its stock's crash in 2011 and predicted it would be the coming decade's Amazon, whose shares were up 1,000% over the past decade.

It turns out I was far too conservative... NFLX shares rose 90-fold over the next nine years.

Now, take a look at the following chart...

As you can see, this hyperscalable model has led to massive revenue growth among all three companies over the past several years... 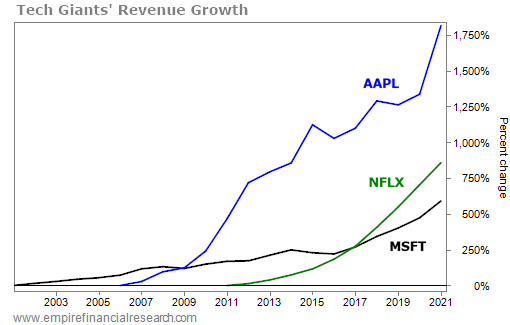 This has, in turn, led to massive returns for shareholders over the same period... 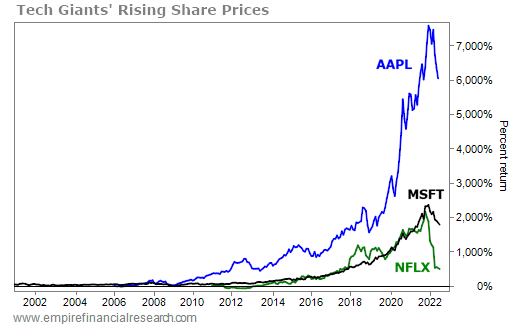 I talk to people all the time who kick themselves for not investing in Apple, Microsoft, and Netflix...

Everyone wishes they had the opportunity to invest in these stocks back then. But I believe that right now, investors have a similar opportunity...

I think people who get into the right stocks today will look back at this year's sell-off as one of the best things that ever happened to their portfolio.

That's why I'm joining forces with Louis Navellier, an industry legend and billion-dollar money manager who has found 18 different 10,000-baggers in his career. We just put together a presentation where we explain how a coming event could create a wave of millionaires in the markets. Learn more here.

Editor's note: Whitney says a coming event on August 29 could set in motion the biggest investment opportunity in three generations. The key is, you need to know what companies are poised to soar... and which are on a downward spiral. That's why he has teamed up with industry legend Louis Navellier to explain how we got to this turning point in the market... and what to do to make a killing off of it. Click here to get all the details.