How to 'Spin' Your Way to Outsized, Long-Term Returns
By Dan Ferris
Friday, June 1, 2018

In 1920, two brothers set out to construct the world's first interconnected system of telephone lines.

Together, they founded International Telephone & Telegraph. The old phone company would eventually grow into one of the world's most renowned conglomerates of all time...

By the 1970s, it had morphed into a mega corporation called ITT, which ran a huge range of operations – including hotels (Sheraton), baked goods (Wonder Bread), and rental cars (Avis). At one point, ITT reportedly owned more than 2,000 individual business units.

Then, Rand V. Araskog took over the business in 1979 – and began charting a new course.

Today, we'll look at the surprising move he made. We're going to talk about spinoffs... and how they can help investors like us achieve incredible returns.

Araskog gradually shed some 250 businesses in order to shore up ITT's balance sheet, which had become heavily burdened with acquisition-related debt. His efforts culminated in 1995 with what the Los Angeles Times called "one of the most dramatic breakups in U.S. corporate history." ITT had decided to split into three independent companies, focused on insurance, manufacturing, and real estate.

What made Araskog's plan so unusual was the fact that one of the world's greatest conglomerates of all time was willingly breaking itself apart, for the benefit of shareholders.

Even competent corporate managers are only human. Most of them would rather manage larger companies than smaller ones.

But building empires can create waste and inefficiency. Breaking up empires through spinoffs can lead to improved efficiency and better incentives for corporate managers... as well as greater transparency and higher returns for investors.

In his classic, must-read book, You Can Be a Stock Market Genius, investor and author Joel Greenblatt lists five reasons that companies pursue spinoffs:

Lastly, as prominent business consultant McKinsey says, "a business creates the most value for shareholders and the economy as a whole when it is owned by the best – or, at least, a better – owner."

That's exactly what Araskog's bold move with ITT accomplished. Looking beyond even his goal of deleveraging, the decision separated ITT into three, independent, asset-rich businesses capable of attracting new owners (shareholders) and managers interested in each company's long-term success.

In 2011, the spun-off company that had retained the ITT name once again split itself into three public companies, spinning off its water-related infrastructure assets into Xylem (XYL) and its defense and aerospace assets into Exelis. Its highly engineered industrial lines remained part of the new, slimmed-down ITT.

Long-term ITT shareholders have reaped huge returns from these spinoffs as well...

We've had success with similar setups in my Extreme Value newsletter...

For example, in March 2008, we recommended Altria (MO) just before its spinoff of Philip Morris International (PM). Extreme Value readers made about 175% and more than 110% on MO and PM, respectively, after we sold the stocks seven years later.

These are the kinds of outsized, triple-digit returns we want to see as investors over the long term.

It's tempting to believe that healthy companies should grow and grow, rolling up more businesses over time... But in fact, spinoffs can be hugely profitable. And as ITT's story shows, when spinoffs are good for the company, investors reap the benefits.

Editor's note: In the latest issue of Extreme Value, Dan alerted readers to an ITT-like spinoff story with similar long-term upside... potentially as much as $520 for every $100 invested today over the next eight years. But you need to act fast... Dan believes huge multibagger returns will only be possible for those who get in at today's valuations. To learn more about Extreme Value – and how to access this recommendation – click here.

As Dan explained today, spinoffs can make companies stronger in a number of ways. Recently, he shared more thoughts on which qualities set strong companies apart... and how the most resilient businesses can flourish during hard times. Read more here: How to Find Stocks That Thrive in a Bear Market.

It takes a "whole-business investor" to identify spinoffs with huge profit potential. And as Austin Root explains, it's one of the most powerful ways to build a portfolio of long-term, top-performing investments. Learn more here.

Today, we revisit the idea of “investing in vice”…

In the past, we’ve highlighted the power of investing in companies that sell products folks crave, like coffee and soda. The same is true of “addictive” fast food… Restaurants like Wendy’s (WEN) and McDonald’s (MCD) bring in repeat customers by cranking out burgers, fries, and frozen desserts. Today’s company fits the same model…

We’re talking about Shake Shack (SHAK), one of the fastest-growing restaurant chains in America. The company specializes in burgers and fries – the pillars of success at McDonald’s. And with roughly 100 “fast casual” locations across the country, customers can sit in comfort or take food on the go. This model is working… Shake Shack has almost doubled its sales since 2015. It’s also adding up to 35 new U.S. restaurants this year.

As you can see below, shares have been on a tear. The stock is up around 100% since its August low, and it just hit a fresh 52-week high. If people keep coming back for more burgers, expect shares of Shake Shack to continue higher… 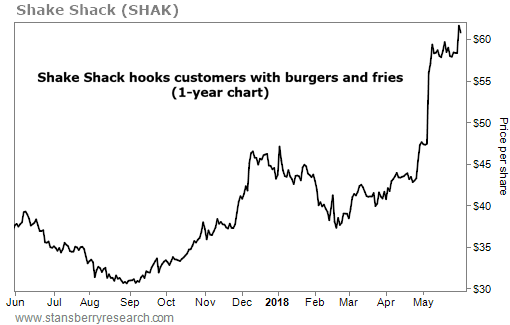