How to Withstand the 'Forced Sale' Snowball
By Kim Iskyan
Wednesday, April 8, 2020

Only about three weeks ago, the S&P 500 plunged nearly 12%. It was the index's third-worst percentage fall in a single day... And that was just a few days after its sixth-worst day ever (down 9.5%).

On those days, you might have found yourself asking: who is doing all that selling?

The answer? A lot of investors who don't want to sell – but have no choice.

You see, when markets fall, they sometimes pick up downward momentum. The effect of this is something like a snowball rolling downhill. Losses build on losses, and the destruction just gets bigger – resulting in historic declines like the ones we saw last month.

This snowball effect led to the fastest-ever flip from a bull market to a bear market.

And in this case, it was partly triggered by something called a "forced sale." Today, I'll show you what this means – and how three simple steps can help you avoid forced sales yourself...

A forced sale typically happens when an investor needs to sell an asset immediately – no matter the price – in order to raise cash to meet a financial obligation.

For example, say your broker lends you money to buy shares. If the value of your account falls below a certain level, you need to sell some of your holdings to raise cash to pay back your broker. This is more commonly referred to as a "margin call."

In normal market conditions, you sell only what you want to sell, when you want to sell it. But if you're forced to sell at once – like when you're issued a margin call – you're at the mercy of the buyer.

In the middle of a frenzied decline in markets, buyers can be brutally demanding. After all, there are a lot fewer of them than there are sellers. That means buyers can push the price lower and lower. So this situation leads to lower prices... which in turn triggers new margin calls... and even lower prices.

Another way of looking at this? Let's say you buy an apartment as an investment, so you can use the rental income to cover the mortgage. Things are fine for a while. But then the local economy sours... and the real estate and rental markets weaken.

The tenant who was living in your apartment leaves, and you can't find someone to take his place. So when the mortgage payment is due – after a few months of dipping into your savings – you wind up having to sell your car to cover the mortgage. Since you had to sell in a hurry, you get a bad price for it... But at least you're able to make the next few payments on your rental property.

A few months later, you still don't have a tenant. And the cash you raised from selling your car has run out. Your only choice is to sell the apartment. But you're not alone... Other people had the bright idea of buying apartments and renting them out. They've also lost their tenants – and can't pay their mortgages.

Suddenly, a lot of properties are going up for sale. There aren't many buyers, and there are lots of desperate sellers. So you have to cut the asking price of your apartment. As a result, when it finally sells, the proceeds aren't enough to cover the outstanding loan – so then you also have to sell your motorcycle at a fire-sale price. That's another forced sale... and another loss.

It's a snowball effect that can destroy your net worth faster than you can imagine.

When this happens in financial markets, it's bad news. Many investors, both individuals and at hedge funds and mutual funds, borrow capital to buy securities "on margin."

So if this happens on a large scale – lots of margin calls on lots of big investors at lots of banks – the forced selling can create a negative spiral that pushes markets down further.

That's one of the reasons this new coronavirus sent the markets tumbling so far, so fast.

The markets may see more large losses in the coming days and weeks. As the forced selling starts to snowball, it will worsen these declines... And if you have money invested, there's no sure way to escape it entirely.

But you can avoid forced sales in your own portfolio, and even minimize your losses in the next pullback. The answer involves three simple steps...

Furthermore, if you do buy on margin (as some more aggressive investors might do), be sure you have enough cash on hand to meet a margin call – before you get one. As always, but especially in these situations, the best possible hedge is cash.

A stop loss is the point at which you decide to sell shares, no questions asked. Choose your stops thoughtfully, so you don't reach the point where you're forced to sell a good company that you plan to hold for the long term. It's a million times better to sell on your own terms and at your own time.

Invest in assets that are uncorrelated. Uncorrelated assets tend to move independently... For example, commodities are often less correlated with stocks (in the past, I've talked about gold as one form of "portfolio insurance").

Following these three steps will help defend you from the pain of forced selling. And if you're worried about protecting your gains in a down market, they are especially important.

But remember – these are all actions you must take in preparation. They won't help you after the fact.

So make sure you're putting these tips into practice... before the next snowball starts rolling down the hill.

Editor's note: Before volatility strikes again, you can arm yourself with an even better kind of "portfolio insurance." It's a strategy that helped our colleague Bill McGilton lock in gains of 227%, 137%, 126%, and 81% during the recent crash... But you must get positioned ahead of time. To hear more about how it works – and to learn which three companies are ideal targets for this type of trade – check out his video here.

"With the right strategy in place, you can hedge against unforeseen disaster – months in advance," Bill McGilton writes. As he explains, one type of "portfolio insurance" is the perfect way to offset your losses if stocks plunge again... Get the full story here.

You want to own gold in times of crisis – and today, Steve says we're getting "a perfect storm for higher precious metals prices." It's all because of an unprecedented situation in the global economy... Learn more here.

As COVID-19 has brought the country to a grinding halt, not all businesses have been harmed. Grocery stores have seen surges in demand, with folks stocking up on food, medicine, and household goods. Today’s company makes sure that Americans are able to get the essentials they need right now…

Weis Markets (WMK) is a $1.2 billion Mid-Atlantic grocery chain. Founded by two brothers in 1912, it now has more than 19,000 employees. Weis supports the communities it serves by buying produce from local farmers and participating in charitable causes like food banks. And in March, as demand for groceries surged, Weis announced its store-level, hourly paid employees will get a $2-per-hour temporary pay raise as they continue to serve during the crisis.

WMK shares held up far better than the broader market when coronavirus fears took hold. And since their March 12 low, they’ve rebounded 40%, hitting new 52-week highs. As folks continue to purchase food and essential items, it should only be a tailwind for Weis from here… 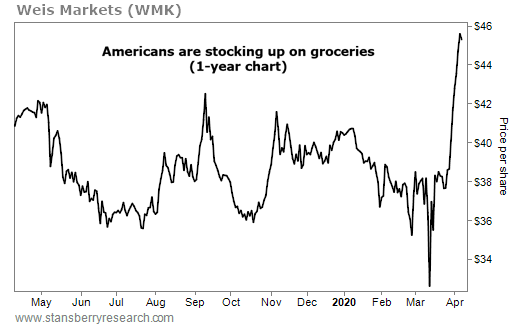