I'm Still Not Worried About the Melt Down
By Steve Sjuggerud
Tuesday, December 11, 2018

That was in the lead headline from Bloomberg on Monday. The market has had a weeklong rout, falling every trading day since December 3.

The recent slide has investors asking the same questions once again. They're desperate to know: "Is this the end?"

Of course, all this is nothing new. Folks have been fearful of the "Melt Down" for years. They've used every fall in stocks to push the idea that the next "big one" was here.

It's no different this time around. And you shouldn't buy into the fear.

I believe stocks still have plenty of upside ahead. We're not at the start of the Melt Down. And I'll share the simple reason why in today's essay.

Here in DailyWealth, you all know my "Melt Up" thesis. At the end of a historic bull market, we tend to see a last, volatile push higher in stocks. And we want to be invested right now... while we can still capture this huge upside potential.

You might wonder why I'm so confident in such a tough environment. The reason is that I can tell you when the Melt Up will end... and when the Melt Down will arrive.

No, I can't tell you the exact day. But I can tell you the circumstances we'll see. Namely, one major event always happens alongside major market falls.

If you want to know when stocks will crash, look at the economy. Stocks have a hard time rising when true economic turmoil strikes.

But even looking outside of these instances, every major market fall has happened when the economy was in terrible shape. In total, we've seen seven stock market crashes of 40%-plus...

All of these 40%-plus declines had a common theme... They happened when the U.S. economy was in a recession.

This tells me we're safe to stay long until a recession is looming. That's the warning sign that the Melt Up is over... and the Melt Down is on the way.

This is also why I'm not worried about the most recent fall in stocks.

According to my research, we shouldn't expect a recession anytime soon. I'll share two reasons why in tomorrow's DailyWealth essay.

We'll check in on how the economy is doing right now... and the two key measures you should be looking at to gauge the health of the stock market.

Until then, know that no recession means no Melt Down. And that means we don't need to stress out about the recent decline in stocks.

"I don't want you to get scared out of the market today... and miss out on potentially life-changing gains," Steve says. Get the details on this surprising fact about the last time we saw a Melt Up – and why he isn't worried – right here.

"While many investors are panicking, smart investors stay patient," Alan Gula writes. "They don't let fear take over and scare them out of the market." Learn how to turn today's level of investor fear to your advantage right here.

Today, we’re looking at a company surviving the “death of retail”…

E-commerce companies like Amazon (AMZN) are changing the way we shop. Many traditional retailers have struggled to keep up. But as Steve has explained before in DailyWealth, “The reality is that retail is always changing.” And today’s company is adapting to survive…

Under Armour (UA) is a $10 billion athletic-apparel maker. The company used to rely heavily on brick-and-mortar retail partners like Dick’s Sporting Goods (DKS) and Kohl’s (KSS). After revenues began to slow, Under Armour turned its focus to selling directly to consumers. It’s part of a move to improve profitability… And it appears to be paying off. Under Armour reported adjusted earnings per share of $0.25 in the latest quarter, up nearly 14% from the same period last year.

As you can see in today’s chart, the news impressed shareholders. The stock is up more than 70% over the past year, and it recently hit a new 52-week high. Under Armour still has work to do. But it knows where consumers go to buy athletic apparel and running shoes… 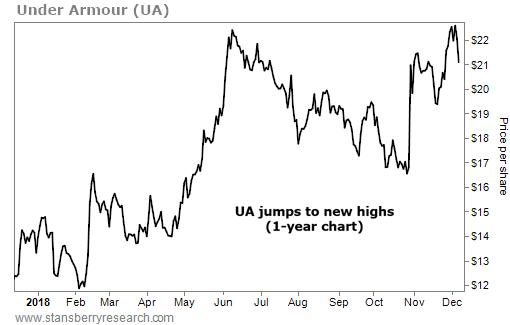