Investors Are Piling Into This Group of Stocks With Reckless Abandon
By Alan Gula
Saturday, May 11, 2019 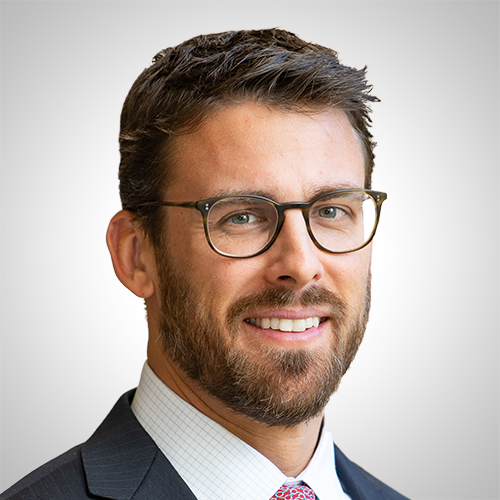 The patty was tasty but unsatisfying...

Last weekend, I grilled up a Beyond Burger. As far as meat alternatives go, the product is good. But it's a far cry from a juicy burger made from real ground beef.

I also cooked a Beyond Sausage. It was closer in taste and texture to a real sausage.

Plant-based meat-substitute producer Beyond Meat (BYND) is the company behind these products. And while I was genuinely curious how they tasted, what really grabbed my attention is the investor sentiment surrounding the company...

Beyond Meat went public earlier this month. The stock rocketed higher on its first day of trading, closing 163% above its offer price.

Beyond Meat had the best first-day IPO performance of any company issuing more than $200 million since telecom firm CoSine Communications rose 174% in September 2000... just after the apex of the tech bubble.

A growing number of stocks are popping 50% or more on their first day of trading. The following table shows the top 10 IPO performances over the past year... 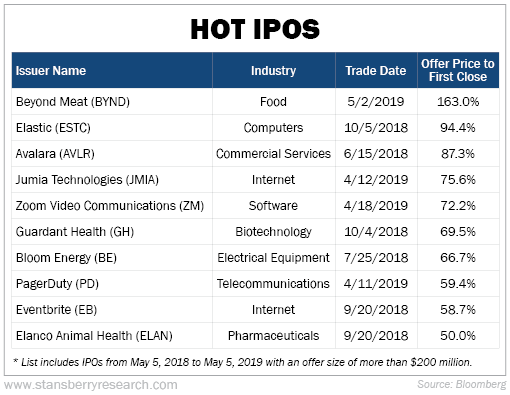 We're in the midst of an IPO frenzy. It's clear that many investors are experiencing the "fear of missing out."

Of course, the ongoing IPO fever pales in comparison to what we saw during the technology bubble...

Though we aren't currently seeing an IPO mania tantamount to that of the tech bubble, there's still plenty of cause for concern...

No profits? No problem! 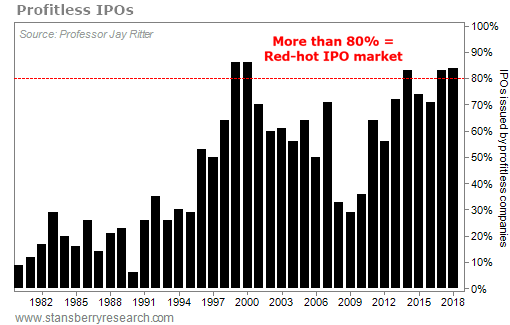 This year, the parade of profitless IPOs – including Beyond Meat – has continued. And many of them have obscene valuations.

Ride-hailing services Lyft (LYFT) and Uber (UBER) are losing money as well. Lyft went public earlier this year with a $20 billion-plus valuation. And Uber went public yesterday with an eye-popping valuation of about $80 billion.

All of these profitless companies coming to market are taking advantage of investors' voracious appetite for risk.

But that's not the only sign that investor sentiment is getting stretched...

Investors must determine the asset-allocation strategy that works for them – the proportion of stocks, bonds, and cash to hold in their portfolios. This is one of the most important investment decisions you can make (if not the most important).

Therefore, if we know the aggregate – or average – asset allocation of all investors, it would give us a good gauge of long-term investor sentiment.

Each quarter, the Federal Reserve gives us data that lets us approximate the average equity allocation ("AEA") for U.S. investors. (For the purposes of today's essay, I'm estimating it on a monthly basis.)

Equity allocations have rarely been higher than today...

The AEA at the end of April was 45%, meaning nearly half of the average investor's portfolio is allocated to stocks. It also hit the 45% mark in January 2018 and last August.

Going back more than five decades, the AEA has only reached this level two other times – once in 1968 and again during the tech bubble... 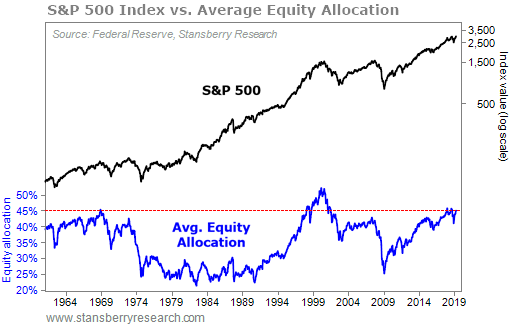 Of course, investors could push valuations even higher in the meantime.

The AEA surpassed 45% in early and mid-1998... just before Russia defaulted and now-infamous hedge fund Long Term Capital Management collapsed, pulling down the stock market. The tech bubble didn't immediately burst... The market roared back and hit a high in March 2000, at which point the AEA reached 52%.

Indeed, that was a Melt Up not unlike the one my colleague Steve Sjuggerud believes will happen again.

Still, the AEA is high enough that it's already signaling elevated sentiment.

Yes, we saw some fear late last year, when the market experienced the worst December since the Great Depression. But for most investors, December felt worse than it really was because equity allocations are generally high.

You must prepare yourself for what's coming next...

This is all behavior you would expect to see in the late stages of a bull market – like we did just before the tech bubble burst. And that's why we should be on high alert that another sharp sell-off may be right around the corner.

Some people believe that the coming bear market will be the worst of our lifetimes. Legendary investor Jim Rogers is one of them...

That's why he's sitting down on camera with Porter on Wednesday night, May 15 at 8 p.m. Eastern time during our first-ever Bear Market Survival Event. They'll discuss how to best prepare for the coming bear market... and explain how bad things could really get.

I'm going to tune in to hear his sage advice. I suggest you do the same. Reserve your seat right here.

Editor's note: We still expect a final Melt Up before this historic bull market ends... But the good times simply can't last forever. You need to start preparing now for what comes next. This Wednesday at 8 p.m. Eastern time, Stansberry Research founder Porter Stansberry and investing legend Jim Rogers will host a FREE event to help you survive – and even profit – during the coming bear market. Save your spot right here.