The old joke is that insurance sales skyrocket after we get a once-in-a-hundred-years disaster...

Once we've seen misfortune happen, we feel like it's more likely to happen again. That's when most of us want to protect ourselves.

It's no different in the markets. People want protection after stocks crash.

It's all part of human nature. That's what makes investing so difficult. We seek security and safety at exactly the wrong times... And we tend to do it in droves.

Lately, investors have been buying protection hand over fist. Their timing is all wrong, though – and this spike in demand suggests that prices could soon head higher.

There are plenty of ways to "insure" yourself against a stock market bust.

The simplest way is to sell some of what you own. You could also move to less risky companies. Or you could buy some bonds.

There's another way to protect your assets, though... by using a portion of your assets to bet on a market decline.

This approach hedges your portfolio. The bets against the market will rise if the rest of your holdings fall. One common way to do this is with put options.

This idea isn't new. Most folks know that put options – which increase in value as the underlying asset falls – offer simple portfolio insurance. And right now, demand for this form of insurance is skyrocketing...

Specifically, total put volumes on the SPDR S&P 500 Fund (SPY) hit an all-time high late last month. SPY is a fund that tracks the overall market. And with more than $300 billion in assets, it holds a massive amount of investor dollars.

The chart below shows the total put volumes trading for SPY. Take a look at how in-demand insurance has been for SPY recently... 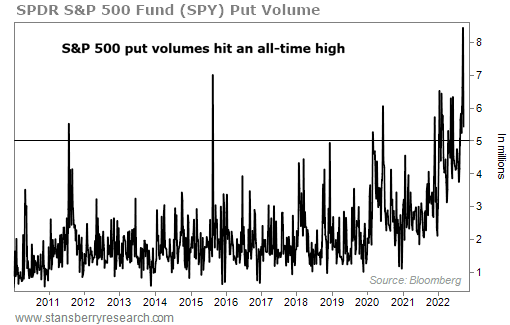 As you can see, folks tend to trade put options within a typical range. But every now and then, there's a massive spike.

Those spikes tend to happen when stocks are falling and investors are scared. So you might not be surprised to hear that put volumes recently spiked to an all-time high.

Insurance isn't in vogue before a fall, though. Investors start clamoring for it once we've already seen a major decline. And that means stocks tend to soar after these spikes occur.

To see this, I looked at each new spike in volumes above 5 million. That has happened five other times since 2011. And stocks outperformed in the months that followed...

Stocks have typically returned 4.7% over six months since 2011. But if you buy when put options are in demand, you can double that return.

Buying at similar setups led to 3.9% gains in three months and 10.1% gains over six months. That's impressive outperformance. And stocks made money 100% of the time after these cases.

Investors are scared, and they want protection. That only happens after a big fall. And according to history, higher prices are on the horizon.

That doesn't mean stocks can't fall further in the short term. But it's one more piece of evidence that the worst of this bust has already happened.

"The stock market has a habit of punishing as many investors as possible," Brett says. Right now, professional money managers own fewer stocks than ever. That means the market could soar much higher if the "pain trade" plays out from here... Learn more here.

"Mom-and-pop investors missed out on the chance to repair their battered portfolios," Brett writes. After the financial crisis of 2008, nearly $1 trillion in investment dollars fled the markets – and never returned. Don't make the same mistake this time around... Read more here.