Editor's note: Longtime DailyWealth readers will remember a friend to our newsletter, political writer and humorist P.J. O'Rourke. With election anxiety rearing its head for many Americans, we're welcoming him back to share a touch of perspective. (Also, if you're worried about how to position your investments to survive any election outcome, be sure to read on...)

America is an enormous ship of state, too big and complicated for any single person to control it...

Our ship of state is an old-fashioned square-rigged treasure galleon, but with a crew of 16 million. That's the number of people employed by America's federal, state, and local governments. This makes for a vessel almost three times the size of Norway (population 5,435,400).

Of course, in theory, there's a captain – the president. But that's just one of the helmsmen. There are also 435 congressmen, 100 senators, and nine Supreme Court justices with their hands on the wheel.

Let's assume that this gang of jack-tars trying to steer all agree on which direction the boat should go. (That has never happened but, for fun, let's say it does.) Trump gets reelected, holds the Senate, and retakes the House – "Right full rudder!" Or Biden wins, keeps the House, takes the Senate, and the ghost of Ruth Bader Ginsburg comes to Amy Coney Barrett and Clarence Thomas in their dreams and convinces them to join People For the American Way – "Left full rudder!"

But somebody still has to go around convincing the ship of state's 16 million crew members – busy battening hatches, furling mainsails, weighing anchors, shivering timbers, and whatever else it is that sailors do on sailboats – to get with the program and make sure something happens with the steering gear.

Trump hasn't had much luck in the past four years. And Biden strikes me as being about as effective as The Skipper, captain of the S.S. Minnow on Gilligan's Island.

Meanwhile, America drifts where the ebb and flow of circumstance take it...

The two most important of all political issues – war and the economy – also take their own course, independent of our domestic partisan politics.

The political parties claim to be able to navigate us around or through war hazards and economic crises... But the pilots they bring on board are often hopeless landlubbers looking through the wrong end of the telescope with their nautical charts upside down. (I'd say we've got two of them on offer this November 3.)

In fact, Republicans and Democrats often take us to exactly where you'd expect they wouldn't...

For the past 150 years, the most broadly punishing financial panics, recessions, and depressions have begun while for-the-love-of-money Republican presidents were in power, rather than share-the-wealth Democrats:

To add perplexity to paradox, during most of the 20th century it was the internationalist, peace-loving, why-can't-we-all-just-get-along Democrats – not the bellicose, saber-rattling Republicans – who sent the nation into combat:

The pattern became proverbial. "Elect a Republican, get a depression. Elect a Democrat, get a war."

Of course, since then, the pattern has gotten mixed up, with Republicans taking the lead in sending troops to godforsaken places and Democrats doing their best to impoverish us all with high taxes, social spending, regulatory interference, and vows to implement lots more of all three.

If there ever was a pattern... You think you know what party is what, then that party goes all whatchamajigger. First it was the Democrats who favored low tariffs and free trade, then it was the Republicans. First it was the Republicans who supported racial equality, then the Democrats took over. Democrats used to be able to count on blue-collar workers, then there was nothing left to count. Southerners once were "yellow dog Democrats" who'd "vote for a yellow dog" rather than vote Republican – then southerners elected the mutt. John F. Kennedy lowered taxes. George H. W. raised them.

History teaches us a lesson... that there is no lesson. War and the economy are chaos theory without the theory... War and the economy both possess such infinite causative factors – and such boundless effective results – that cause-and-effect analysis should be confined to Poly Sci and Econ classes. And then the classroom doors should be locked from the outside.

The creation of wealth contains too much happenstance to be claimed as a partisan issue. One less Henry Ford and I'd have a pair of yoked oxen in my carport... Instead, there's a Volvo.

The destruction of wealth can be equally unaccountable. A wild turkey ran out in the road in front of my 16-year-old son (who'd had his driver's license for three whole days) and he rammed the Volvo into a tree.

War is that wild turkey... I've been hunting turkeys for years. Why are they so smart when I've got my gun in the woods? Why are they so dumb when they've got my son in a car? And how do we respond to those turkeys overseas who think they're so smart that they start a dumb war? I'm not sure that either Biden or Trump would propose the policy I proposed to my son: "Hit the turkey! For the price of a car wash we can have Thanksgiving dinner."

Trump has done some useful work pumping the tax and regulatory bilges on our ship of state. But he also blows the Twitter foghorn at all hours of the day and night (although the fog seems to be mostly in his own head). This is making us passengers sleepless and testy with each other. His treatment of illegal immigrant stowaways has been more hard-hearted but no more hard-headed than the previous administration's. Plus Trump keeps throwing the ship's senior officers overboard.

Biden promises... Well, what doesn't he promise? He'll keelhaul the people who usually sit at the Captain's Table, put everybody in steerage into first-class cabins, make sure the ship's hull is biodegradable, and sail it straight into the hurricane of climate change.

Scary. Board the lifeboats. Persons and disadvantaged children first. But will anybody be listening when Biden gives his orders? And will he remember to give them?

Taxes will rise if Biden wins. But neither candidate shows any signs of stemming the cancerous growth of the federal debt and deficit. And the cost of unleashed inflation – loss of the U.S. dollar as the international reserve currency, and subsequent steep devaluation – may make the cost of higher taxes look trivial.

But the main reason for my not caring much about how this election turns out is the way I see my country... I personally don't view America as an enormous ship of state. Or, if it is, it's one where we all get to jump ship whenever we want.

Americans are not "all in the same boat" on a single vessel headed to a certain destination by way of a particular route. America is a flotilla of small craft – 328 million of them. Our freedom allows us to each have our own skiff, dinghy, canoe, kayak, barge, freighter, yacht, or jet ski. Some are fast and powerful. Others are a little leaky with only one oar. But we are all our own commanders... And we go where we damn well please.

The candidates are little figures on a distant shore. At best they might build a lighthouse, and at worst they're just beach bums. But however they turn out, when we hoist our Jolly Rogers and head out to sea, they'll be landlocked in the White House.

Editor's note: Whichever candidate wins, the next four years could have serious consequences for you and your money. So make sure you check out our Stansberry Research pre-election briefing, with former Congressman Dr. Ron Paul. We cover the financial picture you won't hear on the mainstream news... including the steps you should take – right now – to position your portfolio for any outcome. Watch the briefing here.

With all the uncertainty in the world today, investors can never be too prepared – whether you're bullish or bearish about the future. If you want to be sure your portfolio can weather whatever comes next, you'll need to prepare... Read more here: You Can (and Should) Believe in Getting Ready for Tomorrow.

The coronavirus has shaken up the U.S. economy. But what can the government do to fix it? Since reducing spending seems extremely unlikely, it may have to turn to one unlikely sector to increase revenue... Get the full story here: Money Talks the Loudest.

Today, we’re checking in on a surprising “home renovation” winner during COVID-19…

Coronavirus lockdowns have kept people staying close to home for months… giving folks time for home-improvement projects. Companies like Lowe’s and Home Depot have seen their stocks soar as people started buying tools and supplies. Like those home-improvement retailers, this company has seen a surge in demand…

The WD-40 Company (WDFC) is a $3 billion manufacturer best known for its multipurpose lubricant spray of the same name. It sells its products in more than 176 countries and territories. Although its sales took a hit in the previous quarter, they improved in the latest earnings report… rising 5% year over year. And the CEO of the company noted an increase in demand due to do-it-yourself projects, naming the trend “isolation renovation.”

As you can see, WDFC is up more than 150% over the past five years. Shares recently hit a new all-time high, thanks to the latest rally. As long as people continue to tackle their home improvement jobs, this stock should continue higher… 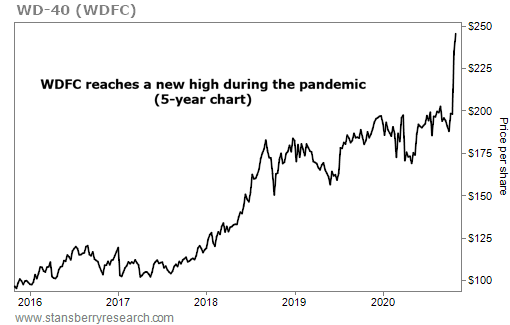