It Takes More Than a Troll to Move the Market
By Sean Michael Cummings
Monday, November 21, 2022

"We are excited to announce insulin is free now."

It was a stupefying move for the company. Eli Lilly gets more than half its revenue from diabetes treatments.

Plus, the tweet – which went out last Thursday – seemed authentic. It had the blue "verified" check mark to prove it. Take a look... 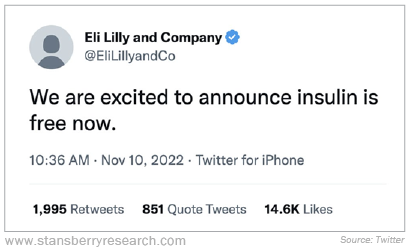 To all appearances, this announcement came from an official channel... But it didn't.

@EliLillyandCo is not Eli Lilly. It's a convincing parody that sprang up due to the recent shakeup at Twitter. Even worse, LLY's share price fell dramatically the day after the "free insulin" gag.

Now, many in the financial press are crediting the troll account with the stock's fall. But they're missing the real cause of the drawdown... and a much simpler explanation.

Before the acquisition, the platform indicated verified accounts with blue check marks. This free designation let "power users" verify their accounts. That way, everyone else knew their tweets were legitimate.

Musk wants to grow Twitter's revenue, though. So he revamped the blue-check system into a subscription model. Now, if you want to make a new verified profile, it costs $8 a month.

This price model came with an unintended flip side: It now costs just $8 to masquerade as a multibillion-dollar company.

When the subscription model kicked in, the platform erupted in a rash of fake "verified" accounts like @EliLillyandCo. Although Twitter has moved to deal with fakers, impostors are still flooding the platform.

At first, this looks like it could rock the investment world... with traders manipulating prices using nothing but $8 "verified" tweets. For example, the day after "free insulin" was announced, LLY fell more than 4%.

The mainstream press jumped on the sensational story... But it's not in line with reality.

The truth is, with or without Twitter, Eli Lilly was poised for a fall. We can see it by looking at the stock's relative strength index ("RSI")...

The RSI is a contrarian indicator. It shows us when a stock moves too far, too fast in either direction.

In either case, a turnaround often follows.

Sure enough, Eli Lilly's RSI broke above 70 on November 1. In other words, the stock was overbought. And that has predicted several LLY sell-offs all year. Take a look... 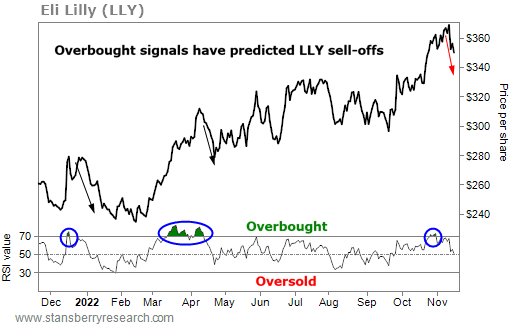 Eli Lilly was overbought for the first time in seven months. This stock was ripe for a downturn. So while it's possible that the "free insulin" tweet factored into the sell-off... it was kindling on a fire that was already burning.

Make no mistake: The @EliLillyandCo tweet was a fake. But the idea that it single-handedly moved LLY's stock price isn't true either. The market is much more complicated than that.

So whether it's a tweet or a financial press article... I urge you take these bombshell stories with a grain of salt.

"The financial press will continue to beat the 'housing crash' drum," Sean writes. Media outlets know that everyone's worried about a housing bust. But this is another case where the headlines are overblown... Learn more here: The Reports of a Housing Crash Are Missing One Crucial Fact.

A dangerous type of investment vehicle has slipped past regulators. And you need to pay attention – because while most investors think they know the risks involved, the reality is even worse... Get the full story here: An Innovative Way to Lose Money in Stocks.