The bulk of earnings season is behind us. And so far, the numbers have been better than anticipated...

According to financial data firm FactSet, around 59% of companies in the S&P 500 Index have reported results. About 88% of the companies with positive revenue and earnings per share have surprised to the upside.

That will be the highest percentage of quarterly revenue beats since FactSet began keeping the metric, if it holds steady throughout the quarter.

In the meantime, the economy is rebounding swiftly... Gross domestic product is rising, on track to surpass 2019 in dollar terms. And household spending is also on the mend. That's important because the consumer makes up roughly 70% of U.S. economic output.

S&P 500 earnings estimates for the rest of this year could be headed even higher as analysts play catch up. And this should lead to a steady rally...

Wall Street analysts and strategists have been slow to embrace the magnitude of the economic rebound.

They're still cautious about the damage done by the COVID-19 pandemic... And as a result, they have underestimated the breadth of the response from Congress, the White House, and the Federal Reserve.

Now, though, those efforts to stave off an economic depression and develop a vaccine are bearing fruit...

FactSet said S&P 500 companies have reported second-quarter growth of more than 85% so far. Coming into the quarter, analysts were anticipating 64% earnings growth. And they were originally even more conservative... At the end of the first quarter, they felt that number would be 52%.

So far, companies are shattering expectations. If growth holds at this level, it will mark the highest quarterly data since the fourth quarter of 2009.

Having worked on Wall Street for most of my career, I can confidently say many analysts are slow to react... especially early in the year. They figure they'll have the next three quarters to fine-tune their estimates. That tells me they're still probably behind the eight ball today.

And given the uncertainty surrounding the COVID-19 Delta variant, we must remember that companies are going to be cautious too. Think about it... If you're the management team of a major corporation, why would you want to set earnings guidance now? You'd want to wait until the outlook is clearer before you start making big adjustments to full-year numbers.

Considering that stocks are just off all-time highs, it's an easy way to lower the bar.

Currently, Wall Street analysts expect second-quarter earnings growth of 58.3%. Their estimates for the third quarter are 27.7%, and 21.2% for the fourth quarter.

As we move through the year, I expect the growth momentum to prove that earnings estimates for the latter half of 2021 are too low. They'll need to go back up.

Not only that, but importantly, big financial institutions will be allowed to resume stock buybacks and payouts as of June 30... So dividend estimates will also have to rise.

All of this has an effect on yields and valuations. As estimates begin to rise, indexes become cheaper based on earnings... And as yields go up, they also make those same indexes more investible.

As stocks become cheaper, they grow more attractive in the eyes of investors. That sets off a whole new wave of buying activity.

So, as we push beyond earnings season, expect the numbers and outlooks to remain solid. The market is resetting the bar. And it should provide support for a continued rally in stocks.

Editor's note: Be sure to check out Stansberry NewsWire for up-to-the-minute market commentary from Scott and his team... with daily alerts, analysis, and ideas. It's a great way to cut through the "noise" of the mainstream media and get to the heart of what's really happening in finance today. Plus, this service is totally free. Learn more here.

"Most investors see new highs and get caught up in strong emotions," Brett Eversole writes. With stocks soaring today, it's tempting to become overly cautious and sell prematurely. But selling now could mean missing out on even bigger gains... Learn more here: Don't Bet Against Stocks at New Highs.

"Bull markets don't die of old age," Chris Igou writes. You might think that stocks making new all-time highs means it's time for a pullback. But history says that moves like the ones we've seen could lead to even higher valuations in the near future... Get the full story here: This Year's Powerful Start Could Lead to More Gains in U.S. Stocks.

The pandemic forced many restaurants to “go digital” when in-person dining shut down. And while folks ordered food online before COVID-19, research shows online orders are still growing, even as in-store dining recovers. That means restaurants with a strong digital presence will benefit. Today’s company is thriving already…

Chipotle Mexican Grill (CMG) is one of the world’s most popular restaurant chains. Its menu ranges from tacos and burritos to bowls and quesadillas – and it locally sources many of its ingredients. While it’s a clear leader in the kitchen, it’s also dominating online ordering. Chipotle brought in total sales of $1.9 billion in the most recent quarter… And roughly half of that came from digital sales – a trend the company expects to remain strong in the future.

As you can see, CMG shares have rocketed higher over the past two years. They’re up more than 140% and recently hit a fresh all-time high. As long as Chipotle remains a leader in online food sales, this success should continue… 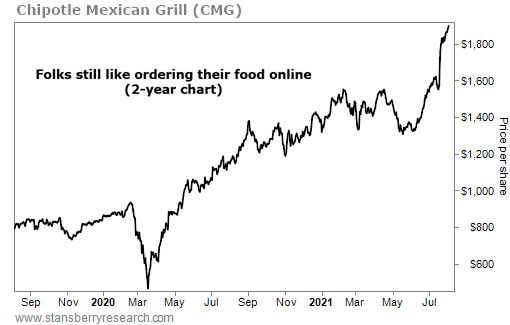