It's Worse Than a Recession... And It's Already Here
By Dan Ferris
Wednesday, October 19, 2022

Editor's note: Our colleague Dan Ferris says we're at a unique moment in history. It will lead to incredible opportunities for investors – but not until the pain is over. In this essay, adapted from his August issue of Extreme Value, Dan covers a threat that nobody wants to face... and why he believes it has already arrived.

Of all the multiplying villainies of nature swarming the market right now, investors are most concerned about two of them: inflation and recession...

The White House stirred the pot on July 21, when it published a blog post claiming the long-standing definition of a recession – two consecutive quarters of falling real (or "inflation adjusted") gross domestic product ("GDP") – wasn't valid.

The post went on to offer several paragraphs of convoluted, overly complicated blather about how the National Bureau of Economic Research can officially determine when we're in a recession. In my opinion, the blog post was codswallop. It was the government trying to save face ahead of the news that would come the following week...

Because seven days after the post, the Bureau of Economic Analysis reported that real GDP fell 0.9% in the second quarter – its second consecutive quarterly drop.

Folks... no matter what the White House claims, we are – according to the hard data – in a recession, and we have been for some time now.

"But," you may ask, "how can we experience inflation while the economy is in a recession?"

The answer lies in a macroeconomic force that nobody wants to name...

When inflation happens during an economic recession, it's called "stagflation." 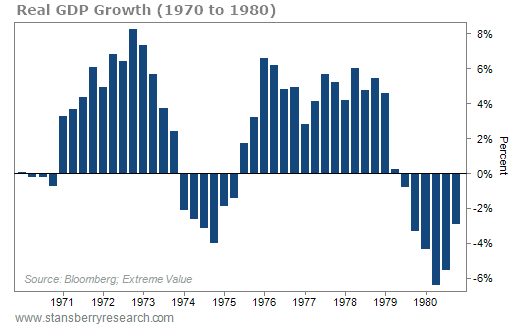 High inflation was a key ingredient in generating negative real GDP. This means that inflation and contraction are not only possible, but when inflation is bad enough, they go together like famine and war.

Inflation and recession are too often discussed as exclusive conditions... But stagflation corresponds with a lot of folks' everyday experience, as they wind up spending more to buy the same or less stuff.

Even though it's unlikely to ever make headlines (most talking heads view it as too complicated to bother explaining), stagflation could influence your daily life for a while to come...

Year-over-year changes in the monthly Consumer Price Index ("CPI") – the most widely accepted inflation proxy – have been below 4% for most of the 21st century and below 2% for much of the past decade. But now, inflation is at 8.2%...

The Federal Reserve's inflation target is 2%, which means it will likely keep raising interest rates until the monthly year-over-year changes in the CPI fall back down to that level.

Many people – including some of my Stansberry Research colleagues – believe the Fed will "pivot" and stop raising rates soon. It's possible. But I doubt it'll do so before the end of the year... and before inflation falls back to 2%. Fed Chairman Jerome Powell clearly stated at his July 27 press conference that "ongoing increases... will be appropriate."

Even if the CPI settles in around 4% to 5%, that's more than twice the level that we've seen for most of the past decade.

Couple that with the ongoing recession, and it's clear that there's risk of continued, or perhaps recurring, episodes of stagflation over the next several years.

Throughout history, governments have all behaved the same way... When there's a war or other crisis and they start running out of money, they start printing it in excess. This is our reality right now.

The U.S. government has printed too much new money, too quickly. And the effects of this are just now hitting Americans in the form of higher rent and soaring prices for food, necessaries, and luxuries.

In this kind of environment, we must focus on finding investments that preserve wealth... and generate good returns for years to come.

Editor's note: Stocks are tanking... Bonds are tanking... And nearly $50 trillion has been wiped out of investors' portfolios this year. But Dan believes this is only a taste of how bad things will get before the bear market ends.

He says the economy is spiraling in a new direction – breaking the pattern of nearly everything we've seen over the past 20 years. And it means the next few months could require a totally different investing approach to help you protect your wealth.

So TONIGHT, at 8 p.m. Eastern time, Dan is breaking the story on what he has discovered... Plus, he'll share the names of two popular stocks you must sell immediately. Sign up to join this free online event right here.

"The biggest losses tend to come in the final third of the bear market," Dan writes. That means stocks could fall further from here. And that's only one factor that shows risk is high for investors today... Read more here.

After several brutal months for stocks, buying now might seem like the contrarian move. Everybody wants to call the bottom. But even though it's tempting, it's likely too soon to go "all in." Get the full story in our Weekend Edition... It's Far Too Early to Be Too Bullish.