Nearly 3,000 feet of vertical rock towered in front of him. And his plan to free solo meant he'd have no ropes, no support, and no safety net to catch him if he fell. Alex was ready to do what no man had done before...

El Capitan is the pinnacle of rock climbing. And that's with ropes, harnesses, and all the other safety gadgets.

When I say "vertical," I mean it. To any normal person, it'd be crazy to even think of climbing that rock face without a rope... unless you have a death wish.

Alex didn't see it that way.

He'd spent years free soloing other mountains. He learned the optimal times to climb and what conditions were right for it. He even dialed in the best time to start a climb, based on where the sun would be midway through.

Alex wasn't crazy... far from it. He never leaves anything to chance when he free solos. And that's exactly how he approached El Capitan...

He didn't wake up one day and spontaneously climb the world's scariest vertical wall. Instead, he broke down every foothold, every transition, and where each finger would go.

He started by mapping out his route weeks in advance. Then, he climbed it countless times with a rope and harness.

Alex stopped at the riskiest and most life-threatening sections and practiced moves to safely get by. He envisioned his success both mentally and physically.

Alex's methodical approach has more parallels to investing than you might expect. He studied his craft... made a plan... and executed it.

Today, I'll share how it worked out for him... and how you can apply these ideas to your own investing.

He fell multiple times... But the ropes were there to keep him alive. He noted what went wrong after each fall. And he even kept a journal about every move from the base to the top of the mountain.

Alex was turning a daredevil attempt into a calculated climb. It was completely systematic and well-thought-out. And that limited his risk as much as possible.

Alex started his free solo climb on June 3, 2017 before sunrise. He finished the daunting feat in less than four hours. Here's a picture taken by Jimmy Chin at National Geographic, showing Alex midway through the climb... 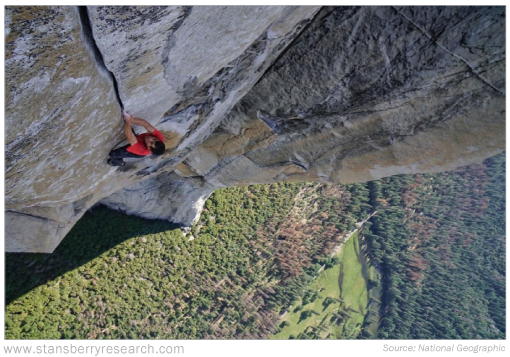 OK... so maybe Alex was a bit crazy for doing this climb without a rope. My hands are sweating just looking at the photo.

But his planning meant he wasn't blindly putting his life at risk...

He was calculated. He only climbed when the conditions were right. And he took every precaution to ensure his success.

He built a system for the climb, based on data from his practice sessions and his years of experience. And he followed it perfectly... into the history books.

If you want to succeed in the investment world, thinking like Alex is the way to do it. You need to have a system for limiting risk... one that can consistently highlight the best times for you to put money to work.

To those on the outside, it might look like you're making risky moves. But it's all part of the plan. And sticking to that plan is how you make extraordinary gains in the markets.

This is the most crucial lesson I've learned over my investment career. To succeed, you must find a plan that works for you, and stick to it.

For me, that means studying history. That led me to my "cheap, hated and in an uptrend" mantra for investing. I know that if I can find investments with those criteria, I'll likely do well.

That's just half of it, though. It's just as important to have an exit strategy. Knowing when to sell – and making it systematic – is my safety net.

I like to use a 25% trailing stop as a rule of thumb. That means I sell when a stock falls 25% from its highs. But there's nothing magical about that number. The important thing is having a plan.

That way, you know exactly what you'll do when trouble strikes... and when you'll do it.

Building your own investment plan – and sticking with it – means taking calculated risks... not crazy ones. And it's the best way to get ahead in the markets.

To the average person, investing can seem a lot like gambling. But it doesn't have to be that way. This basic investment tool can help you know exactly when to walk away... and help you lock in profits at the same time... Get the full story here: If You Must Gamble... Use This Humble Tool.

"When do you get back in after getting out?" Steve asks. If you've hit your stop loss, but the investment has begun to turn around and look enticing again, you'll need to know when it's safe to get back in. Check out Steve's guidelines for buying back into stopped-out positions right here: How to Know When to Get Back In.

Market Notes
AN E-COMMERCE BOOST FOR THIS HOME-GOODS RETAILER

With COVID-19 cases surging, folks have stayed away from brick-and-mortar stores. As we’ve covered with companies like Wayfair (W) and Amazon (AMZN), online shopping has gotten a boost. Today’s company is benefiting from that trend, too…

Williams-Sonoma (WSM) provides high-quality cookware and home furnishings, with stores in multiple countries across the world. And even though it closed all 616 of its physical store locations for more than half the first quarter, it recently reported strong results. According to President and CEO Laura Alber, the crisis accelerated the shift to e-commerce, and has “given rise to a newfound appreciation for the home.” Williams-Sonoma’s e-commerce revenue grew more than 30% in the first quarter… And the company reported comparable brand revenue growth of 2.6%.

WSM shares are up 41% over the past year, including dividends. They recently hit new all-time highs. And as folks spend more time indoors sprucing up their houses and avoiding public places, this trend should continue… 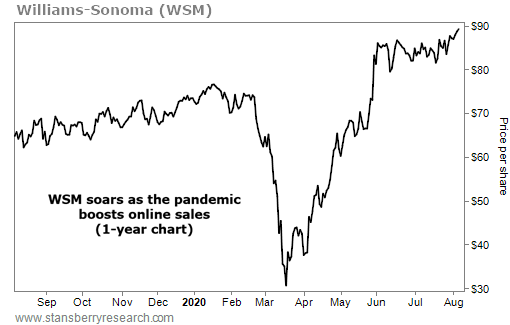