Steve's note: I'm not an expert on cryptocurrencies like bitcoin... But I'm not surprised at all that it's soaring. It's exactly the kind of thing that mints millionaires during a Melt Up. And the Fed's easy money policies are fueling the fire. Today, I'm sharing a piece from my colleague Eric Wade on an important fact that many bitcoin investors get wrong...

When you pull up a chart for bitcoin, you probably just check the price and move on...

Most people look at (and think about) bitcoin in terms of dollars. That's for the same reason you'd price any asset in dollars – it makes it easy to track. People want to see when bitcoin is in a rally or a sell-off, and tracking bitcoin in dollars is an easy way to keep score.

But don't forget... bitcoin itself – and the bitcoin network – doesn't have anything to do with dollars.

Thinking about price and nothing else can lead to misconceptions when it comes to bitcoin and other cryptocurrencies. And it can hold you back as a crypto investor.

The bitcoin network doesn't move dollars. It moves bitcoin – and only bitcoin.

Now, there may be a human being at the end of either bitcoin transaction who does care about dollars, and does care about the price. And as investors, we're part of that – we join in on that dollar talk.

But then you hear something like the recent statement from Citibank... when early this month, it said in a research note that bitcoin could "become the currency of choice for international trade."

OK. Thank you, Citibank... for catching up to where we've been for years.

Of course bitcoin can work in international trade. If you put bitcoin on one end of the network and send it around the world to someone else at the other end of the network, then they can convert that bitcoin to anything they want – or keep it. Bitcoin isn't directly linked to dollars.

Instead, when we talk about cryptocurrency prices, what we're really talking about is the value that the market is putting on it...

We're dealing with the market and its perception, its risk tolerance, and its expectations of profit. It's about all the people who participate in the market and what they believe will happen.

So, if I say bitcoin is going to reach a million dollars in our lifetime, that means I have the expectation that when bitcoin is $50,000, it's undervalued on a lifetime basis... but that it might be overvalued in a short-term basis. It's all about value.

All of this might sound obvious. But I want to help folks break away from limited thinking and misconceptions...

I've heard people talk about transferring dollars over the bitcoin network. That isn't how it works. You could build a network on top of bitcoin where someone holds dollars on one end, and someone else then feels confident that they could withdraw dollars from somebody else.

You could do that. But it's important to know that the transactions on the bitcoin network are independent of the dollars... other than the "brackets" at either end of any transaction, which is the human who's saying, "I'm going to buy bitcoin with my dollars."

You can't just walk up to the bitcoin network, hand it some dollars, and have those dollars move across the network and show up at the other end, the way you would with a bank wire. It's just different.

Even more important, this understanding matters to your investments, too...

We're all looking to build our net worth. But when you're building your position in cryptocurrencies or related technologies, does it change things if you take dollars out of the equation? Do you still look at your cryptos in the same way?

Try putting the dollars and the price appreciation of the token out of your mind once in a while, and ask yourself, "Do I want to own this disruptive technology that has unique new monetization principles? Do I want to own it irrespective of the dollar change in value?"

Because that dollar change is just a human on the other side who's willing to buy it for that price. And technology doesn't always answer to price.

So, try holding your portfolio to this standard...

Look at it the same way you would an ounce, 40 ounces, or 400 ounces of gold. We know that dollars are going to fluctuate on that. But a bar of gold doesn't ask how much it's worth when you pick it up and hold it in your hands, does it?

Then neither does bitcoin.

Editor's note: Next Wednesday at 9:30 a.m. Eastern time, Eric is sharing a critical crypto update. These events can be incredibly lucrative... For example, you could have made more than 400% in about seven months if you acted on the free recommendation in our last crypto briefing. This time, Eric is revealing how six small cryptos could potentially help you make 10 times your money in 2021... Make sure you sign up here.

"We live in a world where the dominant currency is engineered to bleed value," Eric writes. And with fiat currency being inflated and devalued on an astronomical level today, there's never been a better time to hold a true store of value... Read more here: Here's How the Financial Reset Happens.

The utility of bitcoin might not be entirely obvious at first. You might wonder why you'd want to own it instead of stocks or hard assets. The answer is that the best is yet to come for the crypto... Get the full story here: Three Ways to Use Bitcoin Before the Blockchain Revolution.

Market Notes
AS FOLKS KEEP SPRUCING UP THEIR HOMES, THIS HOME-IMPROVEMENT RETAILER WINS

Today, we’re looking at a company that’s thriving as folks upgrade their homes…

The pandemic has forced millions of people to stay close to home over the past year… which has given lots of folks the opportunity (and time) to improve things around the house. Companies like Lowe’s (LOW) and Floor & Decor (FND) have performed well as people tackle do-it-yourself projects. And today’s company is benefiting, too…

Home Depot (HD) is a $320 billion home-improvement giant. It sells everything a homeowner needs for projects around the house: paint, power tools, lighting, and more. As people turned to this home-improvement retailer throughout the lockdowns, Home Depot delivered record-breaking sales and earnings for 2020… It grew revenue by $21.9 billion last year – which was more than it made in its first 19 years of business – for a total of $132.1 billion.

As you can see, shares of HD have bounced back over the past year. They are up more than 60% and just broke out to a fresh all-time high. As people continue to embark on home-improvement projects, this stock should keep heading higher… 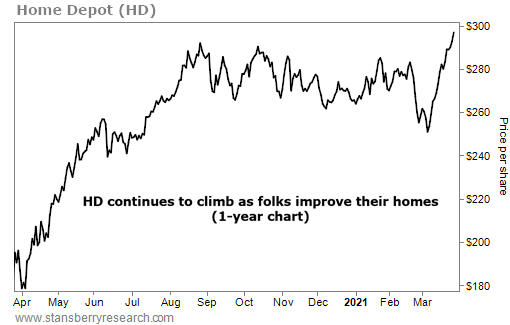