On the Ground in Beijing: The Big News
By Steve Sjuggerud
Tuesday, June 5, 2018

I arrived here in Beijing just in time for the big event...

As of last week – for the first time in history – stocks trading in mainland China are finally a part of the major global stock indexes.

For the first time ever, global fund managers are essentially being forced to invest in Chinese stocks – whether they are a good deal or not. Hundreds of billions of dollars will flow into Chinese stocks over the next couple years as a result.

For investors like you and me, it's a once-in-a-lifetime event...

Last week's move was the right one. More important, it's the start of something we will never see again – a change that will send a wave of money flowing into China-traded stocks...

Specifically, at the close of trading on May 31, MSCI – the leading provider of global stock indexes – added China-traded stocks (known as "A-shares") to its indexes.

For example, roughly $2 trillion is benchmarked to MSCI's Emerging Markets (EM) Index alone. Half that money could ultimately end up in Chinese stocks as money managers buy to match their benchmark indexes.

In fact, MSCI CEO Henry Fernandez said as much last week at a press conference here in Beijing...

"If we were to include both large- and mid-cap [Chinese] stocks, half of the companies covered by the MSCI EM Index would come from China," Fernandez said.

If he's right (and he is), that means $1 trillion would ultimately be benchmarked to Chinese stocks – based on just one index.

In my opinion, the chances are excellent that China will make up nearly 50% of the MSCI EM Index in about seven years.

That means big money – potentially $1 trillion or more – will flow into Chinese A-shares in the next five years, as they are added to stock indexes and big investors are forced to buy. It is as certain as the sun coming up tomorrow.

The question is, when will this happen?

On May 31, the first official inclusion date, the money flow was relatively small – a trickle, really. This was by design, according to MSCI. It's a bit of a test case, to make sure everything flows smoothly.

The next round of inclusion is scheduled for September – and that will be a relatively small amount too.

But then the big changes will start, likely in 2019... And what will they look like?

"We want to do bigger jumps," Fernandez told the crowd here in Beijing.

"We don't want to do a large number of small inclusions," he explained. Instead, Fernandez wants MSCI to do "a small number of large inclusions."

He didn't give away MSCI's timeline. But I strongly believe that MSCI will have completed its inclusion process within seven years – possibly as few as five years.

I can't tell you exactly when the big money will flow into Chinese A-shares.

But I am certain that hundreds of billions of dollars will flow into A-shares within the next five years.

My strong suggestion, as you know, is to have your money there first.

"When Chinese stocks move, they REALLY MOVE – regardless of what's going on in the U.S.," Steve writes. Learn more about this idea right here: Can Chinese Stocks Go Up if the U.S. Goes Down?

"I don't expect a true trade war between the U.S. and China," Steve says. "That said, if we do get a full-blown trade war, the real loser might surprise you." Not only that, but trade-war tensions could lead to a buying opportunity... Read more here: The Surprising Loser in a U.S.-China Trade War.

Today, we look at a company focused on a unique kind of security…

Cybersecurity is becoming increasingly important as more people store and send sensitive information online. Estimates say the hacking “market” costs the global economy as much as $600 billion per year. Today, we look at one of the leaders in keeping our personal information safe…

We’re talking about Okta (OKTA). The company is a leader in “identity management” – it safely stores a user’s passwords and information. Okta’s network includes more than 5,000 of the most-used apps from tech names like Oracle (ORCL), Alphabet (GOOGL), and Accenture (ACN). This large platform makes Okta more attractive to customers… And the company is growing quickly as a result. Okta’s fourth-quarter sales jumped by nearly 60% year over year.

As you can see below, shares of Okta just hit an all-time high. In February, Porter and his team recommended buying the stock in his Stansberry’s Investment Advisory newsletter… And readers who followed that advice are up more than 80%. Congratulations to Porter on another great call! 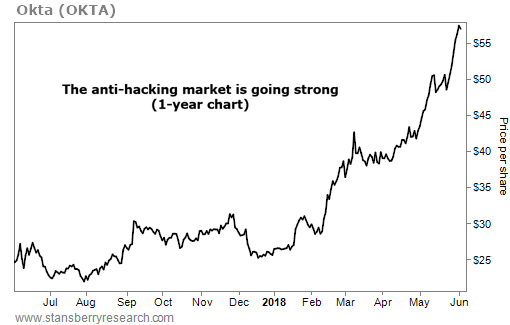