One Investment to Make Before the Winter Energy Crunch
By Keith Kaplan
Friday, October 7, 2022

Editor's note: Americans will face higher energy costs this winter... But that's also a tailwind for energy stocks. And our corporate affiliate TradeSmith has found an opportunity to profit. In this essay, adapted from a recent piece in TradeSmith Daily, Chief Executive Officer Keith Kaplan and his team share a diversified company that's in a strong position today...

As the weather gets colder, higher utility bills are on the way...

The average cost of heating a home is expected to be $1,200 this winter, according to the National Energy Assistance Directors Association ("NEADA"). That's a 17.2% climb from last year.

Part of the reason is that the European Union has placed gas and oil bans on Russia to decrease funding for its war against Ukraine.

Russia supplied a quarter of the EU's oil and 40% of its natural gas in 2021. Now, the EU is cutting gas imports from the country. In response, the U.S. has sent record liquefied natural gas exports to Europe to ease its reliance on Russian energy.

On top of that, the U.S. Energy Information Administration ("EIA") expects U.S. natural gas consumption this year to increase by 4% from 2021... But it also says U.S. natural gas inventories were 12% below the five-year average in August.

This means that supply and demand may be out of whack by the time winter rolls around.

Now, I'm not just sharing this to give you a head start on saving up for your winter bills...

Today, I'll show you an investment idea to take advantage of premium energy prices. It's a great company for several reasons. But best of all, it's in "buy mode" according to our TradeSmith systems – at a time when most other stocks are sells.

While there are very few pure-play natural gas stocks, one investment area to think about is natural gas transportation.

Gas and oil transportation and storage companies enjoy a competitive moat. It's a dangerous business that requires special knowledge and equipment.

And that specialty has led us to Energy Transfer (ET)...

With nearly 120,000 miles of energy infrastructure across 41 states, Energy Transfer moves 30% of the nation's crude oil and natural gas through its pipelines. It has diversified revenue sources within the energy sector, allowing it to set up fee-based contracts for consistent revenue.

Here's a look at its profitability by segment, measured by adjusted earnings before interest, taxes, depreciation, and amortization ("EBITDA"). As you can see, Energy Transfer's earnings come from a healthy spread of different businesses... 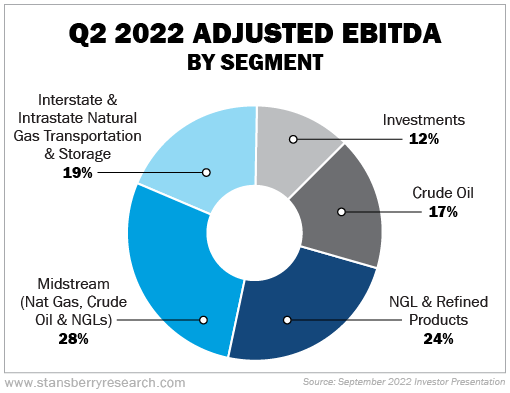 These diversified sources can also help offset any downturns for a particular energy source or issues with a particular business operation.

But in terms of natural gas, at least, lack of demand shouldn't be an issue. The global natural gas distribution market is expected to soar in value by nearly $300 billion between 2020 and 2025.

This will be an incredible boon for ET.

The management team also has conviction in its company. We can tell because they're investing their own money...

Roughly 13% of the stock is owned by company insiders. By contrast, its industry peers have roughly 2% insider ownership. Take a look... 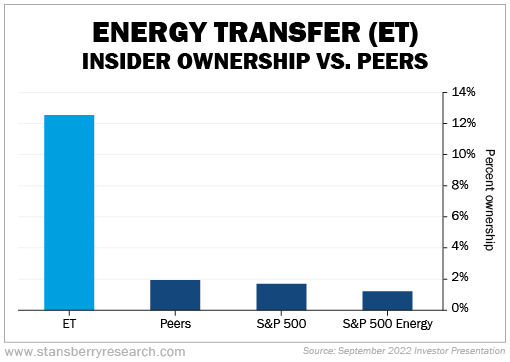 Executive Chairman Kelcy Warren bought $36 million worth of shares in September. And while there are a lot of reasons to sell a stock, there is only one reason to buy a stock – because you think it's going to make you money.

Now, let's look at what our TradeSmith systems are saying...

Putting Energy Transfer under the microscope, we can see that it's considered a high-risk investment. Our Volatility Quotient ("VQ") puts it at 35.4%.

Our VQ tool is designed to come up with an individualized stop loss for any given stock based on its volatility. In this case, a 35%-plus stop shows this stock is more volatile – it needs more "wiggle room" if you're going to avoid selling too early.

But Energy Transfer also has some significant plus sides:

It also pays a dividend yield of about 7.8%. That's an impressive yield.

Nearly half of U.S. households heat their homes with natural gas. If you're looking for ways to profit from today's energy crunch – and put some money back in your pocket – this stock is a strong candidate for your portfolio.

Editor's note: Keith has been able to anticipate the biggest market events of the past few years – often weeks in advance – thanks to TradeSmith's alerts. That includes the crash in 2020... and the bear market that began this year. Now, at a time when most of the stocks in the S&P 500 Index are stuck in the "Red Zone," this system has uncovered the top 10 stocks to own for what's coming next.

Keith recently went public with the whole story. In fact, he's giving away the name and ticker symbol of one of these recommendations for free... Find out what you need to know right here.

Natural gas is setting up for a seasonal boom. But that's not the only factor at play. With today's supply-and-demand setup, history shows this commodity could soar – and investors could make incredible gains... Read more here: Natural Gas Is Headed Back to a Decade-Plus High.

"The green-energy revolution guarantees we'll see a long-term boom for oil and gas," Brett Eversole explains. That might sound contradictory. But the shift to green energy has led to big changes in the oil and gas sector... Learn more in this two-part series here and here.