One Question You Should Ask Yourself Before Putting Money to Work
By Dan Ferris
Thursday, September 5, 2019

One thing is clear: The future looks bleak for Netflix.

A few weeks ago, the video-streaming company announced that its U.S. subscriber count declined for the first time in almost 10 years.

The company lost roughly 130,000 U.S. subscribers in the second quarter of the year, compared to the end of the first quarter. It added 2.7 million total paid subscribers worldwide, but that was much less than its forecast of 5 million.

Not surprisingly, investors punished Netflix's stock... Shares closed at $325.21 the day of the announcement – down more than 10% from their close the day before.

Of course, the stock is still a 50-bagger over the past 10 years.

But because of its long-running success, Netflix's stock is still very expensive... which could indicate that many folks believe the company will shake off the latest bad news.

That's just human nature. You expect the good times to last far longer than you should. But that sort of thinking can get you into trouble in the markets.

If you want to avoid trouble, you must answer one question before putting money to work today.

For too long, Netflix and other high-flying stocks have been considered no-brainers – the "best of the best" that you could buy at any price and hold indefinitely.

But we've seen this movie before...

Cisco makes routers and switches, the basic "plumbing" that makes the Internet possible. Its stock was owned by all of the top mutual funds of its day. You couldn't go wrong owning it at any price.

Until the dot-com bubble burst.

It's not that Cisco wasn't a great business. It was well-managed, way ahead of all its competition, growing rapidly, and gushing cash earnings. But everybody thought it was the greatest business on earth.

When everybody on earth thinks an investment is a no-brainer, you should question it.

Right now, that means you should question whether Netflix's future returns will resemble the incredible 50-bagger it has generated over the past decade... or more like a company that faces increased competition in its space and just lost U.S. subscribers for the first time in almost a decade.

I'll leave it to you whether you should question the other FAANG stocks, too. For my own part, I don't question that they're incredible businesses. I question whether they're less attractive today as long-term investments.

Maybe you can make a ton of money buying Netflix at 113 times earnings with competition coming out of the woodwork...

But should you bet that way?

It's a question worth asking yourself before putting your hard-earned money to work.

If what you're doing isn't likely to generate results in a time frame that makes sense for you, think about changing your strategy. Maybe many investors who've gotten it right for the past 10 years with high-flying stocks like Netflix should consider changing a little of what they're doing these days...

Tomorrow, I'll tell you exactly what I think will perform best in the years ahead – including one of the absolute best bets I see in the markets right now.

P.S. Today's bull market may be in its late stages, but the next gold boom is just beginning... which gives us a perfect opportunity to invest. I recently shared a high-quality gold stock with my Extreme Value readers. And I predict it could be a four- or five-bagger in the coming months... or return as much as 20 times your money over the long term. Click here for more details.

"The ideas and principles that make great investors don't change much over time," Brett Eversole writes. "But putting them to work can be more difficult." Different investing strategies can be confusing in today's market... but Brett says there's no need to get creative. Learn more here.

"I know you're worried," Dr. David Eifrig writes. "So let's take a step back and see what exactly is going on in the market today." Get his take on how to invest in the months ahead here: Here's Why You Should Ride Out This Volatile Market.

Market Notes
A SAFER WAY TO BET ON SEMICONDUCTORS

Semiconductor chips are critical to the smartphones and other small electronics that fly off shelves today. But shares of individual semiconductor firms can be volatile… That’s why we love “picks and shovels” companies that supply an entire sector. By providing the supplies everyone needs, they keep earning money no matter which of their clients get rich. Take a look at today’s example…

KLA (KLAC) sells quality-control products to chipmakers. Only one company made up more than 10% of KLA’s sales last fiscal year. And serving many businesses helps shield this company from its customers’ ups and downs. Its biggest customer, Taiwan Semiconductor Manufacturing (TSM), saw roughly flat sales in the most recent quarter… while in the same period, KLA’s revenues jumped 18%.

We see the same picture in KLA’s share price. Some semiconductor manufacturers are up over the past year, and some are down – while KLAC rose more than 25%. That’s the power of companies that can sell their “picks and shovels” to whoever is digging for gold… 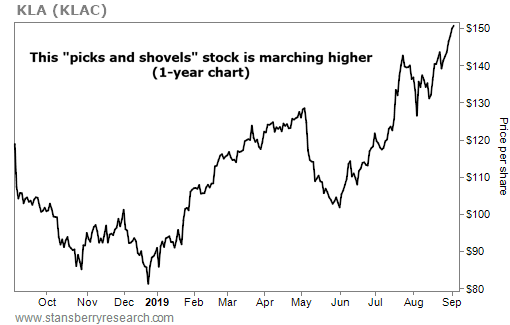