One Secret to Success in Real Estate
By Steve Sjuggerud
Wednesday, June 24, 2020

It felt like I was in a spy movie. No kidding.

In 2013, banks were still reeling from the housing bust. And as strange as it sounds, many of them owned homes they didn't even know about.

That might sound hard to believe... But it actually happened.

Today, I'll share the story of how I bought one of these properties – before the bank suspected a thing. And along the way, we'll learn a secret to finding success in real estate...

Where I live, on the east coast of Florida, banks made dangerous loans during the housing boom of the 2000s. So when the housing crisis got crazy, the banks here suffered.

Many went out of business or merged with others. So mortgage obligations were bouncing around from bank to bank. And when properties went into foreclosure, it made things even messier.

In this case, one property caught my eye after it had ended up in the hands of Bank of America. It was a big, beautiful home, tucked away just one block from the beach. Here's the kicker...

Bank of America didn't know it owned the place.

Because of that, it wasn't paying taxes on the house. And that meant the property was going up for auction. The county would sell it to the highest bidder on the courthouse steps.

No joke. In my county, you could show up at the courthouse to bid on these things. It felt like the Wild West.

The thing is, Bank of America had already foreclosed on the homeowner and taken control of the property. All it had to do was pay the taxes to keep it. But thanks to a paperwork mix-up, the bank didn't realize it yet.

It just so happened that my checking account at the time was with Bank of America. And to buy a home like that at the courthouse auction, you had to have cash... right there... that day... to make the 5% down payment.

So, picture this: I start my day by driving to Bank of America to withdraw a boatload of cash. Once I get it, it's off to the courthouse.

I'm half expecting the auction to be canceled. I mean, how could Bank of America really let this happen?

Either way, there I am. Criminals are coming in and out of court, and I've got my pockets absolutely stuffed with cash.

I can't believe it when the auction starts. I have basically no competition at all.

There are about 30 other people standing around... but they bow out once the bidding gets above $10,000. The auction is lightning-fast. And just like that, I buy the property.

Remember, it would have taken near zero effort on Bank of America's part to stop this. The bank just needed someone to key in a few numbers. If it paid off the roughly $6,000 in back taxes, it would have kept a home worth a few hundred thousand dollars.

Regardless, I've won the auction. And for the first time all day, my stress level starts to drop.

I think I own the house. But then the courthouse tells me that the folks at the bank can get it back at any moment. I've only paid the deposit. They can still pay the back taxes. "And by the way... they've informed us that they intend to pay."

So I get back in my truck. I need a cashier's check for the rest of the money to seal the deal.

Twenty-five minutes later, I'm making small talk with the teller back at my local branch... so that I can buy a home out from under my own bank, for less than half of its value.

Now, that story might sound too fantastic to you. It must have been a once-in-a-lifetime opportunity, right?

The truth is, I bought multiple properties on the courthouse steps during those years. And I learned a key secret to success in real estate back then, too.

The simple reality is that if you want to do this sort of thing yourself, you've got to be willing to roll up your sleeves. You've got to jump in and work a bit. Take this opportunity as an example...

First, I had to check my local property appraiser's website to see what was going up for auction. Once I found something interesting, I did the homework on the property, figuring out what it was worth.

During that step, I knew there was only a small chance my plan would work – but I went ahead anyway. I prepared myself for auction and showed up when I needed to.

The deal could have fallen apart a dozen times. But if I hadn't rolled up my sleeves and put in the effort, I'd have never known for sure.

There really isn't much secret beyond that. If you want to make real estate investing work for you... you've got to work for it.

Then, when you come across something that is truly amazing... don't skip it. Don't delay. Take advantage of it.

P.S. I've been writing about the opportunity in real estate for a decade. And I've put a majority of my investable net worth into real estate investments over that time. Still, I've never been able to share these specific deals and opportunities with my readers... until now.

Tonight at 8 p.m. Eastern time, I'm unveiling my new project. I'll also share why I believe the opportunity in real estate is still as good as ever... And I'll share more of my secrets.

This event is free to attend online, but you have to sign up ahead of time. You can do so right here. See you tonight!

"Demand for homes remains strong," Chris Igou says. It might sound unbelievable, but the global pandemic – combined with extremely low mortgage rates – has primed the housing market for a major boom... Get the full story here: The Next Housing Boom Is Closer Than You Think.

"Homeownership can provide a way for you to leverage the power of credit in our economy to your benefit," Porter Stansberry says. You might think that it's cheaper to simply rent a house. But over the long term, buying a home can actually turn into a form of savings... Read more here: Buying a Home Is Still a Great Long-Term Bet.

It used to be that when we bought music or a movie, we took home something physical… a record, cassette, or CD for music, or a VHS or DVD for video. These days, many folks would rather buy access to a vast content library and access it online. For movies and TV shows, most subscribe to Netflix (NFLX). Today’s company is one of the leading options for music…

Spotify Technology (SPOT) is a $45 billion streaming-audio service. It has 130 million paid subscribers, while 156 million others regularly use a free version of the service that Spotify supports by selling ads. Both those numbers are up about 30% year over year as more folks get on board with this trend. Spotify is also aggressively adding exclusive podcasts to keep folks hooked, including through new partnerships with Kim Kardashian West, Joe Rogan, and DC Comics.

SPOT shares are up more than 50% over the past year and just hit a new all-time high. Streaming services aren’t going away, and Spotify is only getting stronger… 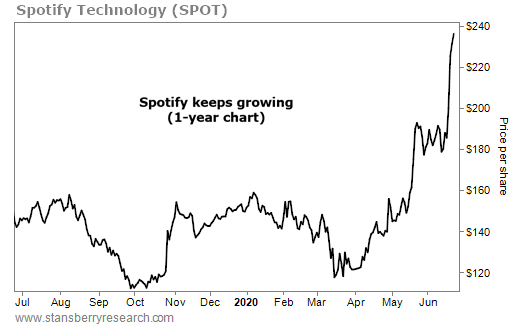