I was in the middle of losing a game of chess to Sean Poynter, world-champion surfer turned real estate entrepreneur. I'll blame the chess loss on the conversation...

What Sean was saying didn't exactly surprise me. Heck, I wrote about the rise of "iBuyers" at the end of 2019. The story is that big companies (like Zillow) are using algorithms to make offers on houses – sight unseen – to sell them for a profit.

Still, I was fascinated to hear Sean's firsthand, on-the-ground experience. It's one thing to analyze the data. But Sean is living out the realities of our evolving real estate market... right now.

Today, I'll share his experience with what big buyers like Zillow are doing... and importantly, what it means for the real estate market.

"Jeez. Is that really happening? Do you feel like the iBuyers regularly overpay?" I asked.

"Of course they do. But don't forget, Vic, they get 6% right off the top of every transaction simply by cutting out the real estate agents. It's just the institutional buyer and the seller working together directly."

Sean, in case you don't know, is a longtime friend of Steve Sjuggerud's. And Stansberry Research even supported Sean's rise to world-champion status.

You see, by age 30, Sean had already seen most of the world... at least the parts where the waves are good. By the time he was 14, he had landed a surfing sponsorship from a major board-sports lifestyle brand, Volcom.

In 2010, after his sponsor moved on, he chose to transition to a more specialized sport – stand-up paddleboarding. And he quickly rose to the top of the pack.

Sean won his first International Surfing Association paddlesurfing gold medal in 2013. He took another gold in 2015. Then in 2018, with Steve's friendship and the official sponsorship of Stansberry Research, Sean would go on to win the Association of Paddlesurf Professionals ("APP") World Tour. The APP officially crowned him world champion that year.

The only downside is, you won't make a lot of money in surfing. And paddlesurfing pays even less – even if you're a world champion.

So Sean retired from professional surfing... bought a home... and turned his attention to his next competitive focus: real estate.

Now, he's buying, repairing, and selling homes in Jacksonville, Florida. And I've seen firsthand how he has turned his athletic focus and dedication into incredible real estate tenacity.

In talking to Sean, I got his firsthand experience of what the numbers have been telling me...

Prices are up a lot in the last year... But they can still go higher.

First of all, we need more housing. Current estimates put the housing deficit at roughly 5.5 million housing units. You can't get around supply and demand. It's Economics 101.

If you're still skeptical, though, you're not alone. That's where Sean's story comes in...

Prices have gotten so high that according to a recent University of Michigan survey, folks are now more pessimistic on housing than they've been since the 1980s – when borrowing costs were five times as high.

That belief has cooled down the market in some places. Sean has even noticed it here in Jacksonville. But when I asked him whether he's seeing prices come down at all, here's what he had to say...

"Yeah, things are cooling off in some neighborhoods. But if the home we're working on fits what the iBuyers are looking for... they'll pick it up. They're my favorite buyers to work with. They just make it so easy."

In other words, institutional money is providing a backstop in the real estate market.

We're in a zero-percent-interest world. Rates have started inching higher recently, but they are still near record lows. A basket of homes provides yield... which means banks and big buyers are still eager to buy.

So prices are high... But that doesn't mean we're at the end of this boom. We'll be at the end once supply catches up with demand. That's going to take time – potentially years.

Where does that leave us? It's simple...

This real estate boom is nowhere near over. The numbers show that... And Sean's living it firsthand today. Don't let high prices scare you into missing the opportunity.

Owning a piece of physical property is a strong bet today. And the value of property is likely to keep climbing. But if you don't want to purchase real estate, you can still take advantage of the housing boom... Get the full story here: Two Ways to Profit in a Housing Boom... Without Buying Property.

"First-time homebuying is scary, even in a normal housing market," Steve says. It might seem safer to wait until the market cools down. But that could be the wrong move today... Read more here: Why First-Time Homebuyers Shouldn't Beware.

Today’s company knows how to keep its customers happy…

Longtime readers know that brick-and-mortar retailers continue to face online competition. Many stores have had to adapt their business models in order to survive… while others have been able to rely on their loyal customers to keep business afloat. Today’s company is a prime example of the latter…

Costco Wholesale (COST) is a $220 billion megastore chain with 820 locations worldwide. It sells groceries, home goods, and a host of other items. Costco also sells its products in bulk, with discounted rates for its paying members. And with yearly memberships starting at $60, these shoppers are motivated to come back frequently… In fiscal 2021, Costco’s sales increased to $192 billion – up 17.6% year over year.

As you can see, shares are up more than 60% in the past two years… And they’ve soared more than 20% since we last checked in on Costco just four months ago. The stock also recently hit an all-time high. As long as customers continue hunting for deals, shares of this “buying in bulk” store should keep heading higher… 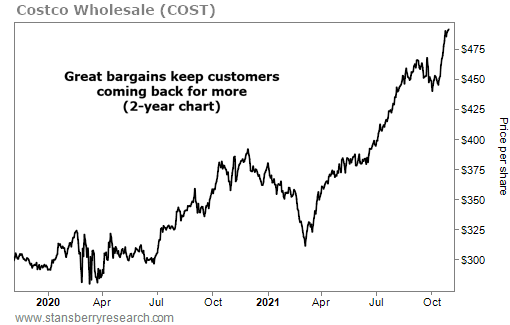