Say Goodbye to the 'Little Pond' With This Information Edge
By Eric Wade
Thursday, August 13, 2020

A single investment I made in 1994 changed everything...

I was 27 years old, working as a full-time stockbroker. I had every license I could get – and I later earned a Certified Financial Manager designation, too.

Thanks to a large group of established clients, my wife and I lived in a big house in Albuquerque, New Mexico. We drove a Porsche and a Mercedes. At night, I dreamed of bigger houses and better cars.

Looking back, I believe I could've gone on to have a long, successful career as a stockbroker.

But instead, a once-in-a-lifetime investment shifted the course of my life forever...

My business partner and I paid $7 to acquire the rights to wallstreet.com.

That was it. I didn't buy stocks, bonds, or any pieces of real estate... I just bought the rights to a domain name long before most people even knew what a domain name was.

The sale made international headlines. And as I said, my life changed forever. But as you'll see in today's essay, it wasn't so much the money that changed me...

It was the way I viewed investments going forward.

You see, on that day in 1999, I lost interest in the "little pond" I was swimming in... the world of 20%, 40%, and possibly even 100% or higher gains in the stock market. Instead, I started casting out much further for what I like to call "deep, blue ocean" investments.

These kinds of gains are rare. But as I'll show you today, a few key secrets go into these investments. Let's get started...

Have you ever wondered why most local stockbrokers aren't multimillionaires?

It's not because they're dumb or don't make great investments. But most local stockbrokers don't get rich because they need to spend almost all of their time dealing with their clients...

They're answering phone calls and e-mails. They're chasing down signatures or dealing with accountants. They're so busy, in fact, that they don't have enough time left to sit down and study quarterly earnings reports. So although they're qualified, most local stockbrokers end up just chucking clients' money into funds and recommendations that come from corporate higher-ups.

That's fine... Chances are, you'll still make money in the long run. And that's what I was doing for the most part. But when my partner and I sold wallstreet.com, I realized two things.

Second, when I bought wallstreet.com in 1994, I saw something that most folks had absolutely no clue about...

You see, most people weren't even using the Internet yet. At the time, only about 10,000 websites existed. And the world had fewer than 0.0004 computers with Internet access per person.

But as soon as I learned about it, I realized that the technology would change absolutely everything.

I didn't even know where to start when telling people how big it was going to be. I could talk about so much...

The Internet would revolutionize the way we thought about mail, newspapers, telephones, movies, gaming, gambling, shopping, politics, education... The list was endless.

But whenever I started talking to people about the Internet and how it would change our lives, their eyes glazed over. They would get caught up on tiny, insignificant details... like the "baud rate" on a modem... their "download speeds"... or what ".com" stood for.

But the thing is... if these folks would have taken just an hour or two of their time to look deeper into the Internet in 1994, they could have made a fortune.

Now, they might not have bought their own domain name... but they could have bought Microsoft (MSFT) or Cisco Systems (CSCO) stock and made fantastic gains before the boom ended. Microsoft climbed 1,800% through 2001... And Cisco soared 6,000%

Instead, these folks sat on the sidelines. They watched one of the greatest bull markets in history go screaming past... just because they were operating on insufficient, outdated knowledge.

That doesn't have to be you.

Obviously, these opportunities are rare. But with this winning formula, you can pinpoint investments with incredible upside. You know you've found deep-blue-ocean potential when you have a barrier to entry... plus a technology that connects people... along with a rare and instantly recognizable value.

Then, all you have to do is wait for the rest of the world to catch on.

Editor's note: Eric believes the next "deep, blue ocean" opportunity is here... in cryptocurrencies. With bitcoin poised to take a center-stage role in our global economy, these assets fit his winning formula perfectly. To get the full story – including why a handful of cryptos could soar 1,000% or more from here – check out his recent broadcast with our founder Porter Stansberry right here.

The investing world is constantly evolving. Now more than ever, finding assets with massive growth potential is extremely rare. But those opportunities do exist in today's market... Get Eric's guide on how to spot one type of asset with big upside potential right here.

"This is a perfect example of the wrong way to time the market," Eric writes. Making money in cryptocurrencies by predicting market moves is difficult... and dangerous. So before putting money to work, make sure you have an irresistible setup... Get the full story here.

Market Notes
THE POWER OF TRUSTED BRANDS IN A GLOBAL CRISIS

Today’s company is staying strong despite the pandemic…

Regular readers know that companies with powerful brands inspire loyalty in their customers. They’ll come back to the brands they trust… and even pay a premium, since they know they’re getting quality for their money. Today’s company has a strong following of customers who want its products…

Deckers Outdoor (DECK) is a $6 billion provider of premium footwear, apparel, and accessories. Its brands include names like HOKA ONE ONE running shoes, UGG boots, and Teva sandals. And even in the face of the pandemic economy, Deckers recently reported strong first-quarter performance. Its net sales increased 2.3% to $283.2 million year over year… largely driven by sales of its running shoes. And President and CEO Dave Powers said that growth was a testament to Deckers’ strong brands and e-commerce presence.

DECK shares are in a long-term uptrend. They’re up around 230% in the past four years. And as customers remain loyal to its popular brands, that uptrend should continue… 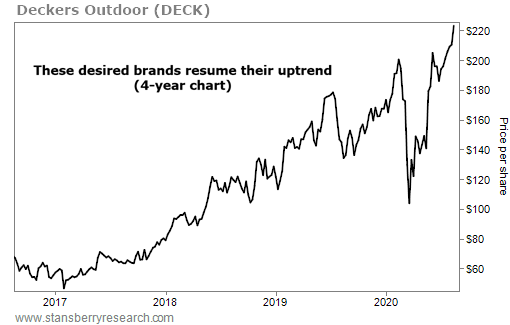