Seven Secrets From the Smartest Businessman I Know
By Steve Sjuggerud
Friday, December 28, 2018

Editor's note: We're counting down the days before the New Year with classic essays from Steve on "the life well-lived." So far, you've read his secrets on earning "silly" wealth, befriending your heroes, and living your dream in retirement. Today, he reveals how the smartest businessman he knows worked his way up the ladder...

My boss is the smartest guy I know...

I'm not just saying it because he signs my paychecks. Seriously, I mean it. He does things most bosses don't do. It has made him a wealthy man. And it has made many of his employees more money than they'd ever dreamed of.

I have a unique perspective here... I hired him 13 years ago. We've known each other since we were kids. Now, rightly, he's my boss.

He worked his way up from the bottom to the top. It wasn't because of some sort of power-mad ambition. He didn't have a master plan. He simply thought of better ways to do things.

He isn't afraid to be proven wrong. I'm not saying he likes being wrong... He is competitive. But he won't hold stupidly to his original belief once it's been discredited.

Ever since we were kids, he has had a unique ability to lead the troops in one direction, full speed ahead... Then if he's proven wrong, he'll do an immediate about-face and lead the charge in the opposite direction.

If a business idea isn't working, cut it. Don't waste valuable time trying to make a wrong a right. Surprisingly, most smart people have a hard time with this.

In a business deal, he does an outstanding job explaining what's in it for the other guy. In short, he doesn't talk about himself, his wants, and his needs... at all. He talks about the benefits for the guy on the other side of the table.

Like everyone, the guy on the other side of the table is selfish. When you get down to it, he really doesn't care what's in it for you. But if you can convince him you'll make him more successful at what he does, you'll get your deal.

He praises and constructively criticizes people equally. If you're screwing up, my boss will call you out. So when the praise comes from him, everyone knows it's legitimate. It's valuable.

If you're the boss, you know constant praise without constructive criticism is useless. (Unfortunately, that's my management style. I'm too nice.)

He's friendly with "rivals." He even gives away most of our secrets. I didn't understand this one at first. I'm sure our competitors still don't...

Why would we happily give away our secrets? Well, after spending time with us, our competitors often end up wanting to partner. That grows their business, which grows ours... And if a rival's business folds, the employees know us and try to get a job. We end up with the best talent.

(My boss also says, "I don't mind giving our secrets away... They'll never execute them like we can." That is the biggest insight of all.)

He hires people smarter than him. Wait, didn't I say he's the smartest guy I know? My friend is brilliant, yes. But he's not that organized. So he hired a man "to run the business." And when he decides to push our business into new areas, he hires the best guys he can find.

He pays his employees well – through pay incentives. He has done a fantastic job tying his employees' pay to the jobs he needs them to do.

In my own case, he has always structured my pay in a way that should increase my income and push me to put my efforts behind the best opportunity he sees.

Last (and most important)... it's not about the money. The money is simply one "scoreboard" of his success. A lot of it is about fun... about coming up with a business idea and seeing if it works.

If you took all his money away tomorrow and told him he had to move to a different country, pick a place where he didn't speak the language, and find a different industry, he would make all that money back again quickly. He would use all his secrets... like the handful I outlined above. No question about it.

Some of these secrets might sound backward at first. But if one sounds "totally wrongheaded," think long and hard about it... My boss is the smartest guy I know... And I've seen him do these things over and over again.

You should try to do the same.

"I once hired a young guy within 10 minutes of meeting him... because it only took me that long to realize he was the real deal," Steve says. Find out his secret for finding "once-in-a-lifetime hires" right here.

"These are helpful for beginning and seasoned investors," Steve writes. "They're a great reminder about the most important things to understand when it comes to the market." Check out nine more of his favorite tips here: What You NEED to Know to Be a Successful Investor.

Market Notes
IS THIS SURVIVOR OF 'RETAIL APOCALYPSE' LIVING ON BORROWED TIME?

As you can see, Build-A-Bear’s stock has plummeted roughly 80% since its 2015 highs. And its share price is near the lows it traded at 10 years ago. As the brick-and-mortar toy market struggles, this last survivor could soon go the way of Toys “R” Us… 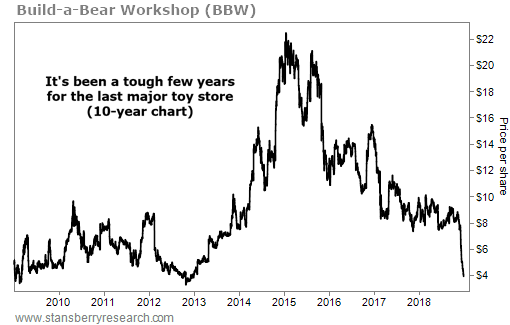