Silver Is Poised for a Double-Digit Bounce
By Brett Eversole
Tuesday, September 27, 2022

Silver has been crashing...

The metal is down 31% from its March high. And it recently hit its lowest price since 2020.

The washout has investors scared. They want nothing to do with the metal. Even worse, bets against silver are at the highest level since 2019. And we've only seen sentiment this negative a handful of times in the past few decades.

History shows us that silver is poised to bounce. And we could see strong outperformance over the next year.

Sentiment is like a rubber band. It can often stretch much farther than you'd expect.

Investors give up on assets all the time. That indifference can turn to disdain. And eventually, it'll grow into outright hatred.

But in the end, a stretched rubber band always snaps back. Pessimism can only go so far. It'll eventually hit an extreme.

So just when you think sentiment can't get worse, guess what? Things start getting better...

That's the point when prices have a chance to bounce back. And silver is gearing up to do exactly that today.

We can see this setup in the Commitment of Traders ("COT") report. This is a weekly report that tells us what futures traders are doing with their money. Right now, folks are more bearish on silver than we've seen in years. Take a look... 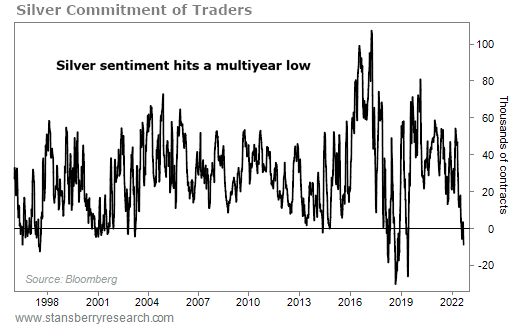 Speculators have seen silver prices crash... So they're jumping on the bandwagon.

They're betting against the metal at one of the highest rates on record. And we've only seen more negative readings a couple of times before – in 2018 and 2019.

To see what could happen next, I looked at similar levels of pessimism... specifically, every time the COT fell below and then rose back above negative 12,000.

That has happened six other times since 1995. And those cases were bullish signals for silver prices. Check it out...

Silver hasn't been a big winner over the long term. Its typical annual gain is just 4.7%. However, buying when sentiment is negative can juice your returns...

Buying at similar setups led to 6.5% gains in three months and 10.3% gains in six months. And it returned an impressive 12.5% over the following year... more than double the metal's typical buy-and-hold return.

That kind of gain would only partially offset silver's loss for the year. Plus, sentiment could slide even more before a move higher. But the rubber band can only stretch so far. And based on history, we're likely darn close to a big snapback.

"If you're a long-term investor, get ready," Brett writes. Traders are incredibly bearish on the overall market. This is a rare signal – and if its pattern holds true, stocks could see huge outperformance over the next year... Learn more here.

The bad news for U.S. housing just keeps coming. But this is a "boom and bust" sector. And with speculators throwing in the towel today, history shows the next boom phase could be about to begin... Read more here.