Speculative 'Can't Lose' Psychology Is On the Loose
By Dan Ferris
Saturday, September 25, 2021

I want to be clear from the start...

This is a bubble.

When investors still pour record amounts of money into any asset trading at the highest valuation it has ever reached, it's a bubble. And that's happening with stocks today...

So far this year, investors have poured more than $400 billion into exchange-traded funds ("ETFs")... And it could exceed $500 billion by the end of the year.

That data comes from the Financial Times, which recently published the following chart from macro advisory firm Strategas. You can clearly see the big uptick in ETF inflows this year... 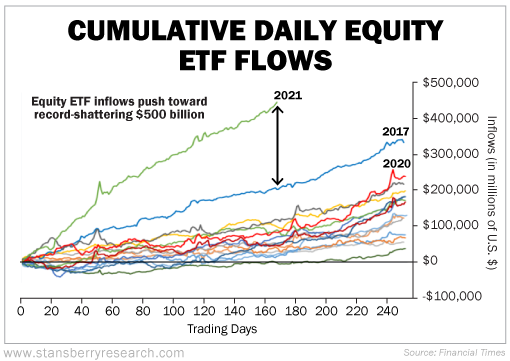 It isn't just one corner of the market, either. As Strategas analyst Todd Sohn told the Financial Times...

It's the persistency of the equity rally, up 100% since last March with barely a pullback. It's everybody into the pool, it's everything, every region, every sector.

With "everybody" in the "pool," stock prices have naturally reached record-high valuations...

The easiest of those measures to understand is the S&P 500 Index's price-to-sales (P/S) ratio. It rarely eclipsed 2 times sales before January 2017, but it has mostly been above that level in the nearly five years since then.

It never hit 3 times sales until this past April... And it's still above 3 today.

At this point, warning everybody about a bubble in stocks – or even worse, bonds – makes me feel like that boorish guy at the party who won't stop bloviating about how much he hates some politician... You just can't shut him up.

But I can't stress this enough. U.S. stocks are more expensive by any meaningful measure than at any other time in history.

And instead of being scared of stocks... everybody wants to buy them.

I don't care what the popular sentiment indicators say...

I know some of them are flashing "fear" right now, implying that it's a great time for contrarians like us to buy.

In my mind, some of those sentiment indicators are so volatile that they're practically worthless...

For example, the American Association of Individual Investors ("AAII") Investor Sentiment Survey is indicating fear about stocks right now. Just 22% of respondents are bullish – with the S&P 500 Index only about 2% lower than its all-time closing high of 4,536.

That was the most bullish reading of the past six months. Yet the market is trading at almost the same valuation today as it was on April 21... Its P/S ratio was 3.13 back then, and it's at 3.08 now – a meaningless, minuscule difference.

To be fair, the survey asks investors if they're feeling bullish, neutral, or bearish about stocks over the next six months... So it's a short-term indicator. But after all, it tends to take years of holding on to shares of great companies to make real money in stocks.

If a sentiment indicator goes into extreme fear mode on a tiny pullback of roughly 2% below a new all-time high, how valuable is it to long-term investors?

The only sentiment indicator you need is the market itself...

And instead of exercising caution... investors have reacted to this historic rally by pouring record amounts of cash into stocks through ETFs.

Why? Well, that brings me to my next point about bubbles...

Right about now, I figure the keyboard cowboys are hard at work on their e-mail missives...

They're probably writing in to tell me that identifying a bubble is silly because the one I'm pointing out is all the Federal Reserve's fault.

It's inevitable... Talk about bubbles, and somebody always brings up the Fed. This is another thing it took me years to figure out. And I want to get straight to the point again...

The Fed doesn't make the stock market go up.

But nobody ever tells you that the money never leaves the Fed. It just sits there in the banks' accounts with the Fed. It doesn't go into the stock market.

It's like Kabuki theater... The performers adorn lavish, colorful costumes and gesture in grand, highly stylized ways. But nobody is really waging war, falling in love, or committing suicide... It's just make-believe actions. It's all for show.

And like the richly costumed Kabuki dancers, the Fed's activity does what it's designed to do... distract and entertain us.

Real Kabuki is an entertaining distraction you sign up for when you buy a ticket to the show. But you don't sign up for quantitative easing and the accompanying noisy narrative of a Fed-manipulated market. It's more like a tax... It's the part of the price you pay that is forced upon you when you choose to get involved in the financial markets.

Now, I'm not saying there's zero connection of any kind between the Fed's activity and the stock market... only that there's no mechanical, tangible connection. (Hat tip to John Hussman of Hussman Funds and Jeff Snider of Alhambra Investments for helping me figure all this out.)

The point is, the Fed isn't using any kind of magic stock market levitation voodoo...

The Fed's behavior is not nearly as inexplicable and consequential as that of investors who continue to believe in the central bank's power to keep the stock market propped up... even though it has presided over two of the biggest wipeouts in stock market history since 2000.

If the Fed has so much control over the market, why doesn't it act ahead of time to prevent the bubbles and their inevitable bursting?

The answer is that the Fed doesn't control anything but its own narrative. It may influence stocks for extended periods of time, but the truth always comes out during the inevitable crash. As asset manager Jeremy Grantham said recently on the We Study Billionaires podcast...

The most impressive thing here is... the faith the financial community has in [the Fed], despite the fact that they've been let down badly twice.

These were not insignificant setbacks. The tech crash was brutal... The housing bust was merciless...

And yet, it's as if it never happened... Hey, Greenspan was our friend. Bernanke was our friend, and we got croaked, guys! What is the matter with you?

The world sits in awe of the Fed's massive money-printing capability... causing many folks to conclude that it can print enough money to keep the markets afloat.

A speculative "can't lose" psychology takes hold. Asset prices soar into the exosphere (the highest layer of Earth's atmosphere)... And then one day, you wake up, and you're in a bubble.

That day is today.

Since the market rout of late 2018, investors have especially come to believe more and more in the power of the Fed to support the market's rise, even as stocks become riskier and riskier the more expensive they get. It's perverse.

But as Grantham has noted, all bubbles burst at some point... And when that happens, it frequently creates a massive crisis that wipes out countless investors, banks, and others.

This isn't just about bubbles, either...

The Fed's policy of either directly influencing interest rates and housing or indirectly running a Kabuki show for the stock market may be seen as part of a more insidious trend that includes everything from corporate welfare to stimulus checks for those put out of work by the government's draconian COVID-19 response.

It used to be that you worked hard, you sacrificed, you were frugal with your money. And one day... you'd be able to use that hard-earned money because it had some real value.

But now, it's just "use the cheap and easy money." If it doesn't work out, it doesn't really matter because it never was really your money anyway.

So it's kind of sad actually. Why bother to work hard and sacrifice because – why do that? Why not just tap into the cheap and easy money? It's kind of tragic, in our opinion. But the world... seems upside down and backwards to us.

That's what you get when central banks and governments around the world try to "fix" the markets they broke.

If anybody actually cared about investors, they'd use their power and money to educate them and warn them that they won't be bailed out... instead of bailing them out.

That "solution" just discourages them from becoming prudent and educated. It never permits them to learn that partaking in bubbles is a fool's errand and only ends one way...

I have no idea exactly when the current bubble will collapse...

But that doesn't mean it doesn't exist...

It's not hard to see. Yet, with market participants glued to the Fed's Kabuki play, there's no telling how long it'll go on like this.

With that, we turn back to Strategas analyst Todd Sohn's quote at the beginning of today's essay. These days, it's "everybody into the pool" because they all believe the Fed has their back.

And if you believe that, it makes perfect sense to pour record amounts of money into stocks at the most expensive prices ever recorded.

The Kabuki play might seem like it can go on forever... But the curtain always drops at some point. And with that in mind today, I'm singing the same tune I have been...

When the bubble inevitably bursts, you'll be glad you did.

Editor's note: Does the historic rally since March 2020 worry you? Should you be preparing for another market crash, or for the next leg of the boom? On September 28, Dan will join Steve Sjuggerud and Dr. David Eifrig to discuss exactly how to protect your wealth during the final months of 2021. Whether you're bullish or bearish, you need to hear what Stansberry's biggest bulls and bears see ahead... Click here to sign up to attend this free event.