Stop Worrying... You Want to Own Stocks Now
By Steve Sjuggerud
Tuesday, August 14, 2018

Social media behemoth Facebook (FB) fell nearly 20% in one day last month. And that was just the beginning...

The major tech stocks continued falling in the days that followed. The tech-heavy Nasdaq Composite Index lost more than 300 points over three days, for a three-day loss of nearly 4%.

The end of the world is apparently here, according to the media and the big brokerage firms. The news headlines make it seem like this is it...

Are they right? Is this the beginning of the end? Is the "" really over?

I'll spare you the suspense: The Melt Up is NOT over. In fact, as I'll explain, it's only getting started...

We've had a few bad days. So what?

Let me put it in perspective...

Take a look at this chart of the Nasdaq since 2009. Don't you want to be this train? 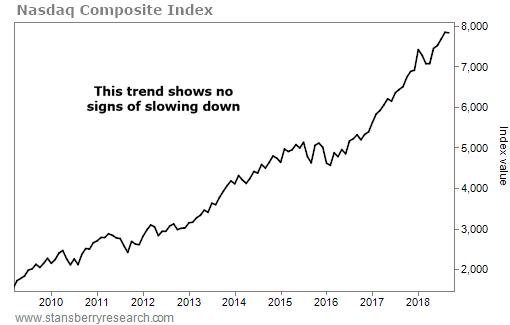 The big trend is still up. And to me, it's actually wonderful that investors are scared... It means we still have plenty of left.

Right now, my computers are getting more bullish on U.S. stocks... flashing new "buy" signals on several areas of the U.S. market.

Overall, they spot more opportunities in U.S. stocks now than they have at any time in recent months. And that's big news.

You see, I built the TWS computers to spot the big trends. And right now, they see uptrends in just about every corner of the U.S. market.

For example, consumer staples moved into buy mode this month. So did semiconductor stocks. Others followed suit across all different types of sectors.

In short, the TWS computers see tons of opportunities today. They think now is the time to put money to work in a big way.

In fact, I believe now could be the best time to buy a long time. The Melt Up I've been writing about for months has officially , as I explained recently.

This is big news. It means we have a green light for making money in the months ahead.

Sure, it seems scary out there. A couple of bad days make it seem like the end is here and the bull market is over. But we need to keep perspective. It's only a few bad days we're talking about here.

Instead of worrying, let's follow the True Wealth Systems computers' lead. They don't read the newspaper or worry about the headlines. They simply crunch the numbers.

Right now, the numbers say we should be bullish... that we want to own stocks today.

My advice is to do just that. Stay long the and stay long U.S. stocks.

Last month, Steve shared two charts that prove the has arrived. See them here: The '' Is Officially Underway.

"Toward the end of most great bull markets, you often have a '' period... where stocks go up dramatically in a short amount of time," Steve wrote yesterday. And one group of stocks tends to lead the way. Learn more here: Don't Think... Just Own This in the ''.

Market Notes
A GOOD SIGN FOR THE U.S. ECONOMY

Today, we’re checking in on one of our favorite economic gauges…

Regular readers know we follow several sectors to get insight into the strength of the economy. By tracking things like recreational spending, we can see when consumer confidence is high. Today, we’re looking at a company that thrives when Americans have a little extra cash in their pockets…

Callaway Golf (ELY) is one of the largest manufacturers of golf clubs in the world… and the top golf-club brand in the U.S. The company struggled during the recession as consumers cut their spending. But today, they’re back on the golf course. Callaway just reported a great quarter, increasing sales by 30% and raising its earnings projections for 2018.

As you can see in the chart below, ELY shares are on a tear. The stock is up more than 70% in the past 12 months and recently hit a new multiyear high. As long as people have extra cash to spend on golf clubs, we won’t worry too much about the overall state of the U.S. economy… 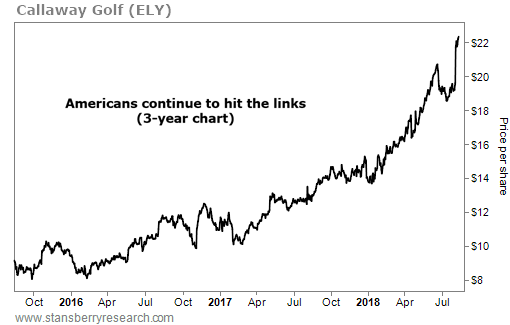