Tesla Will Move the Market... But How Much?
By Vic Lederman
Thursday, November 19, 2020

Tesla – the electric-car maker and one of the most polarizing stocks in decades – is stepping into the big leagues.

Standard and Poor's is adding Tesla to the S&P 500 Index. And the media's take on it can be summed up with one word... "finally."

But it only takes a passing knowledge of the company to know that this assessment is a little dubious. The company is the poster child for eccentric leadership. And its share price is highly volatile.

Despite that, the company will be the largest to ever join the S&P 500. In fact, it looks like it will be a top 10 holding.

That means that if you own anything that tracks the S&P 500, you'll soon be a Tesla shareholder. But don't overreact.

You might find Tesla's leadership as distasteful as I do. But that doesn't mean you should alter your portfolio to avoid it.

Remember, the S&P 500 is weighted by market capitalization. Simply put, the bigger the company, the more influence it has over the index.

So today, we're going to answer a simple question: "Just how much sway will Tesla have over the market?"

Tesla's market capitalization is more than $460 billion as I write.

That puts Tesla in the top 10 S&P 500 companies. But how much sway will that give Tesla over the index?

Well, health giant Johnson & Johnson (JNJ) and financial-services firm JPMorgan Chase (JPM) are near Tesla in the top 10, each with market caps around $400 billion. Each company accounts for about 1.3% and 1.2% of the S&P 500, respectively. So, we can expect Tesla to end up with a weighting of over 1% based on this.

Consumer-electronics giant Apple (AAPL), for comparison, is at the top of the pile. It makes up nearly 6.5% of the S&P 500... Or about five times more than where Tesla will likely end up.

Still, when you stop to think about it... it becomes obvious that the top companies really do account for the majority of the market.

So clearly, the larger companies are much more important to the performance of the market. But if you're not a Tesla fan, how much should you worry about it joining the index? And to our greater question... how much will Tesla move the market?

The answer is: not much.

All it takes to see this is a little bit of math.

Even on a 25%-day for Tesla (in either direction), it would only move the market about 0.25%. Tesla is volatile, unusually so. So those 25%-days do happen. But once you put it into the broader context of the index, that volatility gets watered down.

So, is it possible that this poster child for eccentricity will move the market? Sure. On its biggest days, Tesla will contribute to the volatility of the S&P 500.

It's impossible to know what tomorrow will bring... But you can still prepare for it. That's why Dan Ferris has put together a simple four-asset portfolio to survive any market conditions... Read more here: You Can (and Should) Believe in Getting Ready for Tomorrow.

With unstoppable government stimulus and a beaten-down economy, the market has seen wild swings since March. That makes now the time to review what you'll do to survive volatility in the future. Check out Austin Root's four steps to prepare yourself right here: Four Steps to Take Before Investing in 2020.

Market Notes
FOLKS COULDN'T GET ONLINE WITHOUT THIS 'DIGITAL UTLITY'

Regular readers know you can make solid gains investing in what Dr. David “Doc” Eifrig refers to as “digital utilities.” Much like how utility companies provide crucial services such as electricity and water, digital utilities supply the technology we need to live and work. And today’s company is one of the most prominent in the country…

Comcast (CMCSA) is a $230 billion provider of broadband, mobile, and TV services. Individuals and businesses around the U.S. need reliable Internet access in order to get through the day… And that means Comcast enjoys heavy demand. The company saw a massive surge in customer acquisition in the third quarter… It added a record 633,000 high-speed Internet customers and 556,000 all-new customer relationships.

CMCSA shares are in an uptrend, recently hitting a new all-time high. Meanwhile, Doc recommended CMCSA to his Income Intelligence subscribers in June… And those who followed his advice are up 28% so far. Congrats to Doc and his team on another great call! 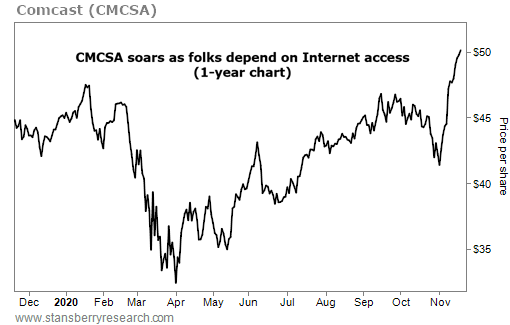