Editor's note: We're still waiting for the uptrend here at DailyWealth... But we love it when stocks are hated. Today, we're sharing an essay from Whitney Tilson, founder of our corporate affiliate Empire Financial Research. He says some of the best stocks out there are poised for an epic rebound – and one specific business trait sets these companies apart...

Look at some of the top-performing stocks of the past decade...

These tech giants share a few important traits that led to windfall profits for investors. For one, they all rode the wave of accelerating growth...

By that I mean that their revenues didn't just grow, but they grew at an increasing rate.

Alphabet's annual growth rate has been at least 20% for the past several years. And the real moonshots – like Amazon and Netflix – saw their revenues soar to 40%-plus growth for an extended period.

Today's bear market has crushed growth stocks. But that gives us a rare advantage...

Even if you're a value investor, it's important to set aside part of your portfolio for growth stocks like these. But because growth stocks are normally expensive based on traditional metrics, you'd have to compromise for a chance at big gains... and hope that accelerating growth makes up for buying in at a premium.

Now, the valuation picture is on our side. And the companies that were unfairly punished could stage an incredible rebound.

I'll cover the one trait that shows when a company is destined for accelerating growth... and how it can help us find the beaten-down growth stocks likely to soar.

The above examples – Amazon, Netflix, Google, and Facebook – are sometimes called "verb stocks."

In 2020, a new verb stock burst onto the scene with incredible velocity...

When the COVID-19 pandemic began, video-conferencing platform Zoom Video Communications (ZM) came out of nowhere to become an irreplaceable part of our everyday lives.

It was one of the greatest growth stories of all time. In December 2019, Zoom had 10 million daily meeting participants. By March 2020, that number had ballooned to 200 million... and a month after that, Zoom had 300 million daily users.

The company's service quickly became an essential part of Americans' lives, so much so that people "verbified" it practically overnight.

Later that fall, Merriam-Webster made it official, announcing that "Zoom" was added to the dictionary as a brand-new verb. 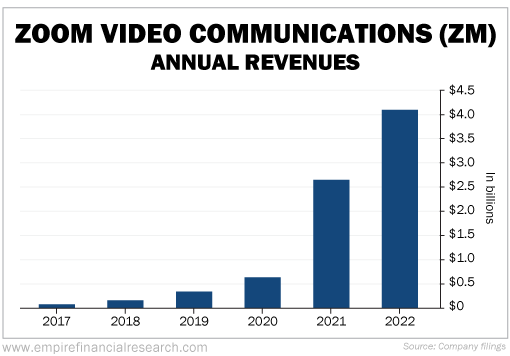 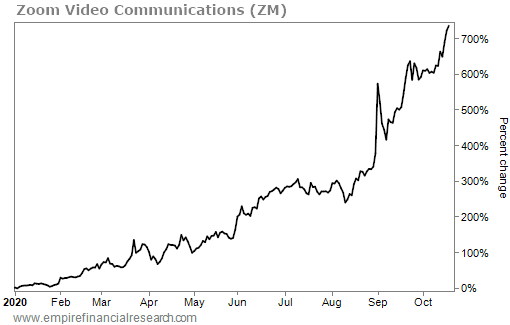 Zoom's business model, like many other verb stocks, is hyperscalable... It can grow in a big way, reaching huge amounts of customers, without having to spend much capital to do so.

This is a key trait that shows a company is set up for accelerating growth. Zoom is just one recent example. We've seen this with many of the biggest market winners of the past decade...

For instance, I bought a lot of Netflix's stock in 2012 when its revenue growth slowed to around 10% for three quarters. Its stock ultimately fell more than 80% to hit a multiyear low below $8 per share. Then, growth accelerated, and the stock surged sevenfold over the next two years.

Part of that success was due to Netflix's hyperscalable business model. Because Netflix paid a fixed amount for its content, it cost the company virtually nothing to add a new subscriber. Each new subscription was almost pure profit.

Growth took off. And Netflix became so popular that its name became a verb.

We're living in a time when the hyperscalable business model is about to hit all sorts of industries. But no one is paying attention...

Through the first half of this year, dozens of high-quality growth stocks have been decimated due to panicky retail investors and hedge funds being forced to liquidate.

Some of those stocks deserved the fall. But some have been unfairly punished.

The panic has caused even the best hyperscalable stocks to trade at prices that are hugely distorted from their true value. History shows that as accelerating growth kicks in, they could rise by hundreds of percent – faster than you can imagine.

Editor's note: Back in March 2020, many experts thought the world was coming to an end. But the bull market came roaring back... And certain stocks soared to astronomical new highs.

Now, in the midst of this year's market chaos, Whitney says a historic event is about to spark one of the biggest investment opportunities we've seen in decades... And he's teaming up with a special guest to help you separate the future winners from the low-quality losers. To get all the details, click here.

"As technology evolves, the victims always pile up," Whitney says. As industries rise and fall, it creates losers... and incredible winners. Read more about why disruption leads to opportunity – and what to expect over the next decade – right here.