The Best Edge You Have on the Investment Pros
By Chris Igou
Thursday, June 20, 2019

You don't need an investment background to land a $700,000 contract on Wall Street...

In fact, you can become a Wall Street pro with almost no financial knowledge at all. That was the case for Alexey Poyarkov a few years ago...

Poyarkov was a data cruncher. The Russian software engineer created a series of algorithms while working at tech giant Microsoft (MSFT). These algorithms use math-based rules to sift through incredible amounts of data. And with a few tweaks, they can sift through financial data as well.

That's why hedge funds are willing to pay top dollar to someone with this skill. And it's why, despite a lack of finance knowledge, Poyarkov landed a job in 2016 with quantitative hedge fund TGS Management in Irvine, California.

To be blunt, you're not going to beat Poyarkov at his own game of quantitative analysis. But fortunately, you don't have to.

There's another way you can get ahead of the pros. It's the one surefire way I know to create an edge in your investing approach.

Algorithms are used in many hedge-fund models around the globe. And this "quant" approach gives the investment pros an informational edge on everyday investors.

You're not going to sift through more data than the quants. You don't have fancy algorithms that provide lightning-fast investment information like Poyarkov and his counterparts do.

I'm not saying you can't beat the pros, though...

You can do it – once you stop competing with them directly. Instead, you want to home in on the one thing that matters most... betting against the crowd at the right time.

Simply put, this is one of the best edges you can get over the investment pros... As an individual, you can make moves that are nimble and quick. And you can time your bets against what the pros are doing with their money.

One of the best ways to do this is by watching "fund flows."

This is exactly what it sounds like... a measure that tracks the money going in and out of certain investments or countries.

When big sums of money start to move, it signals a major shift in overall investor action. It can be optimistic ("inflows") or pessimistic ("outflows").

As fund flows reach extreme levels, it's often worth paying attention to. And if you play your cards right, you can profit as the broad sentiment shifts. Consider what happened in Europe in 2016...

Fund outflows from European stocks hit a multiyear low back in July 2016. These major outflows came as the U.K. voted to leave the European Union. The news of a so-called "Brexit" spooked investors, and they started selling.

As a result, billions of investment dollars flowed out of European stocks. But what happened next might surprise you...

The market realized that Brexit wasn't going to take place in a matter of months. And the outcome seemed less scary as a result. If you had bet against the crowd in July 2016, you could have made solid returns. Take a look... 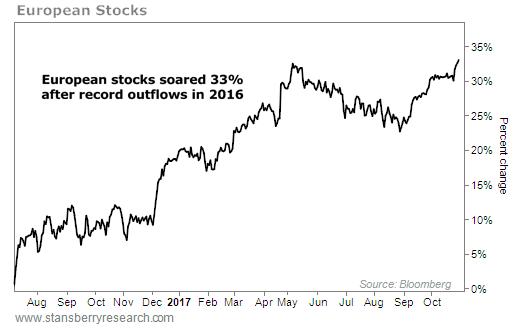 European stocks – as measured by the benchmark Euro Stoxx 50 Index – rallied 33% from their bottom to their peak in October 2017.

That's a significant gain in a little more than a year. And it's what's possible when you bet against the crowd at the right time.

This idea of contrarian investing can't be easily built into algorithms by guys like Alexey Poyarkov. And that's why it's one of the most powerful ways you can get an edge on the investing pros.

You can take advantage of this idea right now. Tomorrow, I'll share a place that investors are pulling cash out of at a staggering pace – and I'll show you why it has huge upside right now.

"If there's one person you should listen to and learn from, it's Warren Buffett," Dr. David Eifrig writes. "No matter what your situation is... you'll be able to benefit." Doc recently shared three of this investment pro's favorite pieces of wisdom. Learn more right here.

"To become wealthy, you don't need a fancy home in San Francisco or Los Angeles," Doc says. "You don't need to spend money on fancy clothes or cars." Get the details on another timeless piece of investing wisdom here: The Simplest 'Buffett-Style' Way to Grow Your Wealth.

Market Notes
THIS 'WORLD DOMINATOR' CONTINUES TO PAY OUT FOR INVESTORS

Investing in the world’s best companies is paying off again…

Longtime readers know we love to invest in “World Dominating Dividend Growers.” These are the No. 1 companies in their industries. They gush free cash flow and have thick profit margins… in addition to rewarding shareholders with large, growing dividends. Today’s company recently raised its dividend for the 46th consecutive year…

Walmart (WMT) is the world’s largest retailer by revenue. It has more than 11,300 stores located in 27 countries. And between e-commerce and physical locations, more than 275 million customers shop at Walmart each week. Selling everything from clothing to bikes to groceries, this company dominates the retail landscape… since shoppers around the world can count on low prices for a broad range of everyday items. And for Walmart, global success means it can steadily grow its dividends.

As you can see, the stock barely budged during last month’s slide in the markets. Shares are up roughly 30% over the past year, recently posting an all-time high. Investing in World Dominating Dividend Growers keeps on rewarding shareholders… 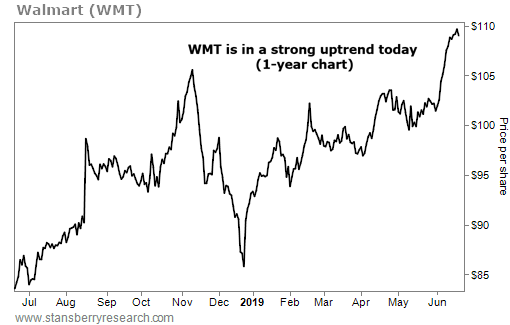