The Biggest Macro Trend in the Markets Today
By Eric Wade
Wednesday, February 3, 2021

Steve's note: Longtime readers know the trend is the most important piece I look for in an investment opportunity. Back in the early 2000s, our resident cryptocurrency guru Eric Wade learned this lesson the hard way. Today, he shares why cryptos like bitcoin are disrupting the banking industry – whether banks like it or not...

I was bitten by the tech bug...

In 1999, growth was happening on the Internet. And I didn't want to merely invest in these tech companies that I knew were going to change the world... I wanted to be a part of them.

So, I started pursuing a new career path.

I was young, aggressive, and certain that I could tackle the toughest problems... no matter how bad or how uphill they appeared. That's how I soon ended up working at a struggling advertising company.

This company was low-tech and old school. It delivered ads to homes that didn't subscribe to a daily newspaper. It gave businesses a way to reach people that they couldn't reach through the normal channels.

I was brought in because the CEO knew they needed to modernize. But he just didn't know how to "reset" his struggling company.

Back then, I learned a lesson that I've carried with me for nearly 20 years. And today – right now – I'm seeing it all play out once again, with one of the biggest macro trends I've ever witnessed.

In the early 2000s, the Internet was eating up the old ways of advertising. Younger, tech-savvy readers canceled their newspaper subscriptions and started getting their news online... for free. And advertisers fled print in droves.

For three years, I fought an uphill battle... I "reset" everything I could. I found inefficiencies and used technology to eliminate them. I worked with developers to streamline our processes and gave customers ways to place orders online.

I went to bat against corporate behemoths like Walmart... and won, getting more revenue at higher profit margins. I developed new products designed to appeal to younger customers.

But I simply couldn't change the macro picture... Customer attention was shifting online.

People quite literally picked up our ads and carried them to the trash can. Sometimes, they didn't even bother doing that. I remember driving by houses and seeing weeks' worth of our ads on the doorsteps, turning white in the sun.

In the end, the company I worked for pivoted out of advertising altogether. And I learned one of the greatest lessons of my career...

You never, ever fight the macro trend.

Fighting this fight dooms businesses, traders, and entrepreneurs into obsolescence. Worse, fighting the macro trend comes with an opportunity cost... You could be riding the waves, not swimming against them.

In my case, I could have avoided three years of fighting an unwinnable battle. But again, it was a valuable lesson. And it taught me to recognize a tidal-wave opportunity when I saw one.

Today, I'm looking at one of the biggest macro trends I've ever seen unfold before my very eyes... And I'm not alone.

I'm talking about bitcoin and cryptocurrencies.

I've spent the last eight years getting to know everything I can about this "final frontier," and relaying all the best information and analysis I can to readers. In short, I've long believed that bitcoin and cryptocurrencies will be the "reset" that our financial system needs to survive today.

And as the Federal Reserve and other central banks just keep printing more and more money, a lot of other people are starting to understand the power and use for cryptos, too.

At the start of this year, bitcoin surged above $40,000. And despite taking a breather recently, it's still up roughly 275% over the past year.

What tech giants like Google and Facebook did to my little advertising company is what bitcoin and cryptocurrencies are doing to banks...

They're decimating them. They're gutting them from the inside out. Some banks see the writing on the wall, and they're working hard to embrace this new technology.

Others have their heads so deep in the sand that they're going to go bankrupt. I can almost guarantee it.

That's because banking is changing, whether banks like it or not...

Here's just one example of how screwed up the banking industry is. A decade ago, the U.S. government passed a controversial new piece of legislation targeting the banking system. It was called the Dodd-Frank Wall Street Reform and Consumer Protection Act.

The Dodd-Frank act weighs in at more than 2,300 pages. Simply reading it would take the average American more than 40 hours.

These regulations are supposed to help Americans. Instead, all the red tape kills innovation by making it impossible for new companies to enter the banking space. So now we have enormous, slow-moving, too-big-to-fail banks.

That's part of the reason why then-President Donald Trump signed a law three years ago that rolled back huge chunks of these regulations.

But the Dodd-Frank Act is just a piece of the puzzle. Banking today is weighed down by so many regulations that it has banks slipping into irrelevance.

It's like the entire sector didn't notice the rise of the Internet...

Think about it... I can send an e-mail from Los Angeles to Tokyo any time of the day for free. But sending money around the world can take as long as five days and costs me $50 or more in fees. Why is that?

For that matter, why does the stock market shut down on nights and weekends? I can tell you one big reason... Because banks have to comply with so many regulations.

But what if we could automate those transactions entirely?

That's where cryptocurrencies come in.

The new macro trend is here... Don't fight it.

Editor's note: According to Eric, the window to make the biggest gains in crypto is closing fast. That's why he's going public with the crypto-trading strategy that helped a small group of Stansberry readers achieve gains like 273%... 288%... 292%... 596%... and even 1,175%. It all starts with an unlikely story... Get the details here.

Cryptocurrencies benefit from two major factors when it comes to growth. And with cryptos reaching the point of mass adoption, it's a good time to make sure you're holding the ones that thrive the most over the next year... Get the full story here: 'Idea Darwinism' and Survival of the Fittest.

The demand for crypto has never been as big as it is today. It might seem overvalued based on its price alone. But if you're looking for a long-term bullish bet on an eventual financial revolution, bitcoin still has a long runway ahead of it... Read more here: The Appetite for Crypto Is Bigger Than Ever Before.

Market Notes
A TAILWIND FOR ONE OF THE WORLD'S DIAGNOSTICS LEADERS

Today, we’re taking a look at a company that thrives as folks get older…

Regular readers know our colleague Dr. David Eifrig believes that health care stocks will benefit as the Baby Boomer generation continues to age. And as the Boomers get older, the need to monitor their health becomes more important. That’s where today’s company comes in…

Laboratory Corporation of America (LH) is a global leader in drug development and diagnostic testing. However, most of its sales are based in the U.S. While the company has emerged as a key player during the COVID-19 pandemic, it also works to treat and analyze diseases like cancer, Alzheimer’s, and diabetes… And as of its most recent annual results in 2019, its revenues have increased every year for the past five years.

As you can see, LH shares have surged in recent months. The stock is up roughly 125% since its March lows, and it just hit an all-time high. As long as LabCorp continues to provide quality research to treat the aging American population, this stock should continue higher… 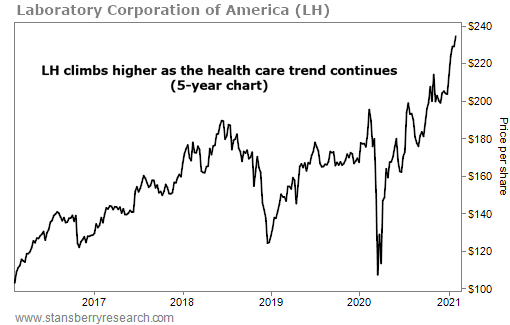