It makes sense to be a little worried about the market today...

Eventually, the market will take a breather. Stocks will fall 5%, 10%, or even 15%... That's just normal market behavior. Corrections happen all the time, even in bull markets.

One basic sign of a healthy bull market is whether more stocks are going up than down. The "advance/decline" line shows us this.

It's a simple measure – one we'll check on today...

That's exactly what happened in the late 1990s. And as longtime DailyWealth readers know, the dot-com bubble burst shortly after. 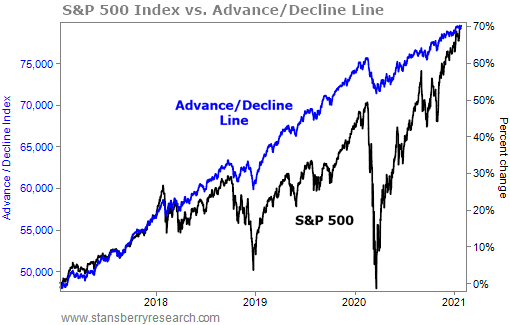 This is a bullish sign for the market over the next few months. But again, that doesn't mean stocks won't fall from here.

Even in raging bull markets, you can still see volatility.

In mid-December, I told subscribers of my option selling service Retirement Trader that they should expect plenty of volatility in 2021. Here was our "market outlook" for 2021...

We'll call ourselves "cautiously optimistic" because there are still plenty of reasons to worry. The market won't move in a straight line up.

First, we'll have to get through the next few months as positive COVID-19 cases continue to remain high. More states might shut down their economies. And that will lead to more people out of work and more businesses closing for good.

You also have to consider how rich today's market is. The S&P 500 Index trades for 28 times earnings. Over the past four decades, the index has had an average price-to-earnings ratio of only 18.

Just on valuation fears alone, we could see some profit-taking sending the market lower.

The point is that we expect the market to finish higher over the next 12 months... but we expect plenty of price swings along the way. It wouldn't surprise us if there were a few corrections of 10% or greater in 2021.

Over the past three months, the index is up more than 10%. In a normal year, that's a whole 12-months' worth of gains. And that has just been the past 90 days.

It may feel like the market is going to keep climbing forever, but that's not going to be the case. Expect volatility.

Editor's note: We're nearing a "make or break" point for the markets... So now is the time to make sure you're on top of your investments. Last night, Doc, Steve, and Austin Root sat down to share their thoughts on what's happening now – plus, they gave away the tickers for their No. 1 stock picks in the coming year. If you missed it, you can still watch their discussion here.

"Major volatility is a hallmark of a stock Market Melt Up," Steve writes. We've seen minor corrections of 5% and 10% already in the current bull market. And if you want to ride the Melt Up as long as you can, you need to be ready for a few downturns... Read more here: The Melt Up Is Never a Smooth Run Higher.

The market can be a little crazy, even in the best of times. And even though we've seen some corrections so far, a combination of factors is set to send stocks even higher from here... Get the full story here: Stocks Can Soar Higher Than You Probably Imagine.

It’s no secret that 2020 was one of the most chaotic years in U.S. history. Between a global pandemic, nationwide civil unrest, and a presidential election, folks had a lot to keep up with. Paying attention to the news has become more important than ever. And people need resources they can trust…

New York Times (NYT) is one of the top news media companies in the world. It publishes the award-winning newspaper the New York Times, along with several other digital and print products. Throughout the pandemic and political turmoil in the U.S., the New York Times has operated at full speed to deliver the news its subscribers need. And that hard work has paid off… The company recently reported a record-breaking 7 million subscribers – up 40% year over year.

As you can see in today’s chart, NYT shares are up roughly 70% over the past year. They also recently hit a fresh all-time high. As long as folks stay glued to the news in trying times, NYT should continue higher…