The Clock Is Ticking for This Bull Market
By Greg Diamond, CMT
Saturday, January 8, 2022

Editor's note: In today's Weekend Edition, we're taking a break from our usual fare to share an essay from Ten Stock Trader editor Greg Diamond. Adapted from his December 20 Weekly Market Outlook, this piece covers a possible warning sign he sees flashing in the markets. And while we believe this bull market still has room to run, his warning is worth paying attention to today...

I get this a lot from friends and family when stocks go down, and I always chuckle.

Do they assume I'm bullish? And why does the stock market going down have to be a bad thing?

It's a sign of the times, in my view.

Just about everyone is paying attention to the stock market these days. Bitcoin's market cap soared to $1 trillion last year... and non-fungible tokens ("NFTs") – digital versions of pictures of things – are selling for millions. All of this is a sign of the euphoria we're seeing in the capital markets right now.

Most people believe that the big indexes are only going up from here. But they aren't looking at what's happening under the hood of the stock market... which is what I'm going to highlight now.

What's playing out today is similar to what happened back in 2000. We're seeing many stocks that were participating in the bull market stall out, top, and then suffer serious declines.

So, what does it mean?

It means the bull market is running out of energy... The clock is ticking.

To be clear, over the short term, I'm still bullish... But the long-term technical picture is concerning for bulls. That's because of this common theme playing out in the prices of several growth stocks.

These stocks started with a huge move up after the pandemic crash of March 2020... But now, these previous winners have all broken their uptrends, topped out, and are diverging from the major indexes.

I'll start with electronic-agreement company DocuSign (DOCU). This was a high-growth company that participated in the bull market along with the major indexes. But it's not doing that anymore.

The stock rallied 390% from its March 2020 low before topping out in September. It couldn't keep up with the major indexes and has since crashed. The 200-day moving average ("200-DMA"), a measure of the long-term trend line, isn't even in the picture anymore... 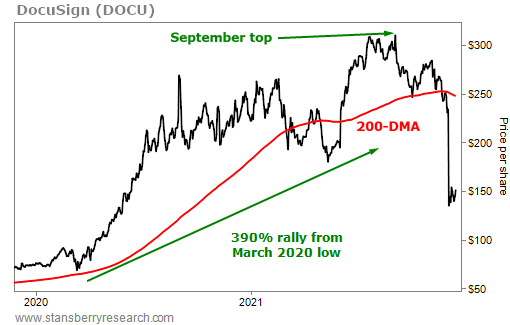 Many of the major indexes are holding above their 200-DMAs, but not DocuSign. This is one of many growth stocks that's falling behind.

Another one is CrowdStrike (CRWD), which provides cybersecurity applications for companies around the world...

This stock had an eye-popping 830% rally from its March 2020 low... Talk about growth. But it topped out in early November and dropped 37% to its recent lows – breaking its uptrend and its 200-DMA. Take a look...

And combined with the action we're seeing across other growth stocks now, it's cause for concern.

Let's look at mobile-payments company Block (SQ) – which changed its name from Square in December.

Similar to other growth stocks, Block skyrocketed almost 800% from its March 2020 low but has since topped out back in August. It's now well below its 200-DMA.

It also couldn't hold previous "support" (the blue lines), an important technical level at which traders tend to buy. Breaking below support turns the level into "resistance." It essentially makes it much harder for shares to rise above that point. Take a look...

You can see the theme I'm highlighting with these stocks. It's the same story in cloud-communications company Twilio (TWLO)...

The stock had a 570% rally from its March 2020 low. But it topped out way back in February and hasn't kept up with the overall market since. Twilio's stock is below its 200-DMA, and the uptrend is broken...

It doesn't matter why these giants are down. It only matters that they are down relative to the other big growth and tech stocks around the world.

Capital is fleeing. When these stocks participated in the rally on the way up, that confirmed the strength in growth stocks – great. But now that they aren't, it puts the bull market on thin ice.

These are the stocks that are falling. Which stocks are keeping the major indexes up? For the most part, the leaders are Apple, Microsoft, and Alphabet. There are others, but these are the big three.

If you lined up all the big growth stocks like dominoes, you'd see that some are falling... And those three major growth leaders – Alphabet, Apple, and Microsoft – are at the end of that line.

They're supporting the weight of the major indexes for now... But eventually, they'll succumb to this bull market breakdown in 2022.

Editor's note: Greg believes a huge market move is coming in 2022... And it could change everything for millions of Americans. If you don't see it coming, it could spell financial ruin. If you prepare, you could potentially double your money 10 different times – without buying a single stock. But there's a caveat: You'll need to use a strategy that's different than what you're likely familiar with... Click here to get all the details.