The 'Correction Hangover' Is Starting to Turn Around
By Brett Eversole
Tuesday, March 5, 2019

A 20% rally does wonders for investor sentiment...

It makes folks feel better. But it can't cure a correction hangover overnight.

This is what we've seen over the last few weeks. The stock market bottomed on Christmas Eve. Folks were scared to death. They expected the decline to keep going... But it didn't.

Instead, stocks have soared 20% in a little more than two months. And while that major rally has helped ease investor concerns, folks are still scared.

They're still holding lots of cash. But this could be starting to change... And that's one more reason we should expect the recent rally to continue.

Humans' herd mentality is easy to see in the markets.

When prices crash, investors flee. Then, after a rally picks up steam, investors rush back in.

The same story has played out time and time again. And it's starting to happen right now.

We can see it through the American Association of Individual Investors (AAII) asset-allocation survey. This is a monthly poll that asks investors what they own.

Specifically, responders share their current allocations of stocks, bonds, and cash. And it's no surprise that cash allocations shot up last fall.

You can see this in the chart below. Investors were scared, and cash allocations hit their highest level since 2013. Take a look... 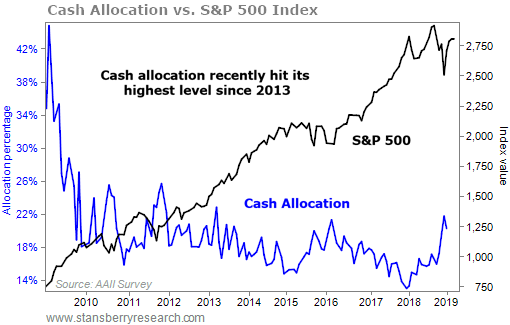 Cash allocations peaked in January... just as the market was beginning to recover from its December low. They've fallen a bit since then, but they're still at multiyear highs.

Said another way, investors are coming back into the market... But they're still skittish. They're buying slowly.

The chart below confirms this once again. It's the stock allocations from the AAII survey. Take a look... 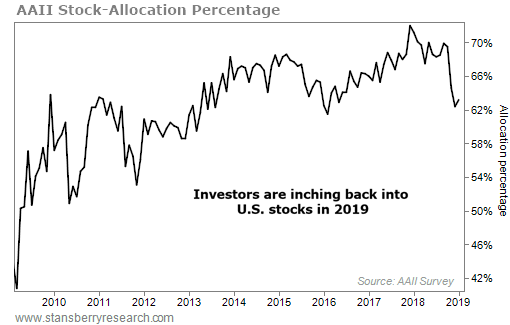 In January, stock allocations fell to their lowest levels since early 2016. They've begun to recover – but they are still well below the levels we saw just a few months ago.

These two charts perfectly illustrate the herd mentality of the markets. Folks fled to cash when stocks were crashing. They're moving back into stocks, slowly, now that prices are up. And that will likely pick up as the gains continue to pile up.

That tells us what's likely from here, too. Investors are still scared, but they're buying because they see stocks rising. This could become a virtuous cycle in the months ahead... as higher prices force investors back into the market.

This is a big reason why we still expect much higher highs to come. This turning sentiment should help fuel the Melt Up in the coming months... forcing more buyers into the market as prices rise, causing even higher prices.

That's the virtuous cycle that's beginning today. We should expect it to continue. And that's a big reason why you want to be long stocks right now.

"While sitting on your hands might feel safer, you will most likely miss out on some incredible gains as we approach the final top," Steve says. Read more about why now isn't the time to stay on the sidelines here: This Ain't the Peak. Here's Exactly Why...

"This was a rare event," Brett writes. "And it means this loser from last year will likely be a big winner in 2019." Get the details on one sector that's likely poised for big gains right here.

Market Notes
THIS 'ECOSYSTEM' BUSINESS COULD SOAR DURING THE MELT UP

Longtime DailyWealth readers know we believe a Melt Up is coming in the stock market, where investors will rush in for the blow-off top. When that happens, Steve says certain “ecosystem” tech stocks could absolutely soar. Today’s company is a great example in e-commerce…

MercadoLibre (MELI) is Latin America’s biggest e-commerce player. It’s the leader in all 18 countries it operates in. Latin American e-commerce sales are expected to grow to $75 billion by 2020 (from just $45.4 billion in 2017). And with its popular online-shopping ecosystem, MercadoLibre is reaping the benefits… In the fourth quarter, the company reported sales of $428 million, 62% higher than the same quarter a year ago (on a currency-neutral basis).

Steve recommended MELI to his True Wealth Systems subscribers in October. Investors who followed his advice are up more than 50% in about four months. As we said last year, this is exactly the kind of stock you want to own during the Melt Up… 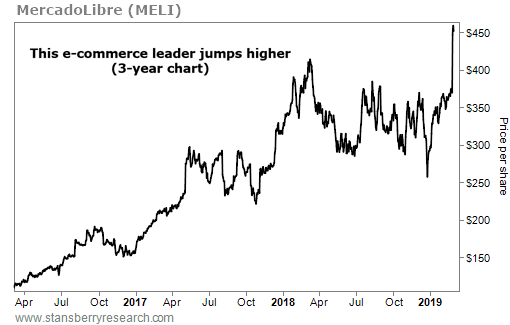