The 'Crypto Cutoff' Will Cause Prices to Soar
By Eric Wade
Wednesday, August 10, 2022

Editor's note: Investors have fled cryptocurrencies this year. But our colleague Eric Wade says this famously volatile market could see a big turnaround soon – thanks to a huge upgrade that could push prices higher across the space. It has to do with one crypto's answer to inflation... Read on for the details.

A drawbridge is going up in the financial markets. As early as August 31, it could cut off new crypto investors from the best that decentralized finance has to offer.

You see, when this cutoff happens, we expect many crypto prices to soar... And folks who wait too long to invest in the best crypto projects will pay higher prices. In short, they'll miss out on some of the best gains in the space.

With this upgrade, Ethereum will undergo an unprecedented change... moving from a Proof-of-Work ("PoW") consensus mechanism to a Proof-of-Stake ("PoS") mechanism. It will become faster and cheaper to use... while maintaining the network's security and decentralization.

It will also drastically improve how Ethereum handles inflation.

Every time a new block is created, the available supply of ETH will drop. That means every ETH will soon control a proportionally larger share of the network... And it will push up Ethereum prices – as well as many cryptos built on the network.

Before we get into it, let's look at how this works with "normal" currency...

Most people are surprised when they learn that the first U.S. currency wasn't the dollar.

The original 13 colonies issued numerous currencies. And in 1775, the first U.S. Continental Congress issued the Continental currency. If you're not familiar, it looked like this... 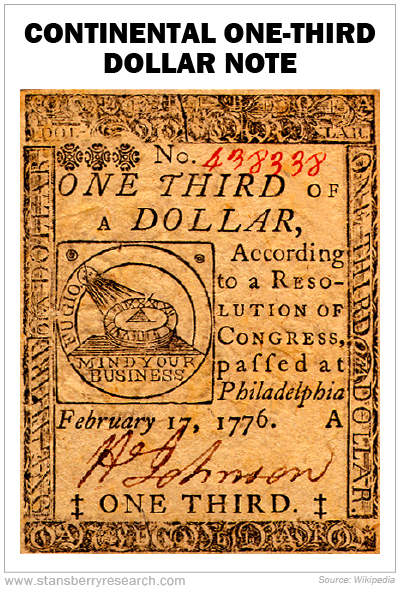 Part of me wishes we still had "Mind Your Business" printed on our money. Sadly, Continentals were short-lived... By the 1790s, they had lost so much value that they were redeemable for just 1% of their face value.

Runaway printing of legitimate bills – combined with massive counterfeiting and clumsy state monetary policies – eroded virtually all the Continentals' value. Anyone who held them risked financial ruin because of rapid inflation.

It would be easy to look at this and say, "Inflation also wiped out America's first national currency... so it's bad." But economics has a funny way of never giving us a straight answer. After all, runaway inflation was how the colonies financed the Revolutionary War.

So we need to consider both sides of the issue when it comes to inflation.

In the case of the dollar, a little inflation helps fund growth... but too much inflation erodes wealth and purchasing power. That's what we're seeing today. 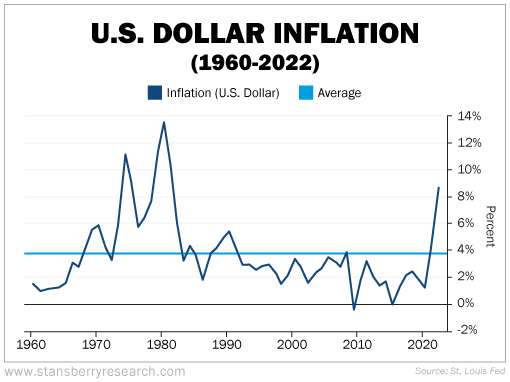 Now, if you think the solution for inflation is deflation, it's not that straightforward. Sure, deflation means lower prices, but it often goes together with economic contraction. It can even collapse overly indebted economies.

While blockchains only have some of the characteristics of a currency, they still have their own brand of inflation to deal with.

For example, bitcoin (BTC) has a reasonable 1.8% current annual inflation. That means every year, the number of new bitcoin entering the ecosystem is limited to just 328,500.

But it wasn't always that way and it won't always be that way. When bitcoin launched, 2,628,000 new bitcoin entered the ecosystem each year. The number decreases roughly every four years and will drop again in 2024 to a mere 164,250 new bitcoin per year. That works out to less than 1% inflation.

In the way that the high inflation of the U.S.'s early currency allowed a country to grow, bitcoin's early high inflation encouraged early users to spend. It allowed new users to join in and accelerated the network's growth. Now that inflation is lower, many people, companies, and even governments are holding their bitcoin longer and longer.

Other blockchains have gone through a similar growth cycle... higher inflation at the beginning and then reducing inflation as a token or coin matures.

But blockchains also must decide who the recipients of newly printed inflationary coins will be. With bitcoin's PoW model, new coins are paid out as rewards to miners who run powerful computers to validate transactions and secure the bitcoin blockchain. The computers run algorithms to ensure that no coin has been improperly sent, ultimately helping to secure the network and make it less vulnerable to attacks.

Other coins follow different models. For example, PoS blockchains pay out rewards to holders who validate transactions and secure the chain by "staking" some of their own coins. Stakers essentially post their tokens as collateral to the network as a promise to act honestly and only put forward legitimate transactions.

As an incentive for validating legitimate transactions and keeping the network secure and honest, stakers are rewarded with newly minted tokens. By doing this, stakers aren't just helping the ecosystem... they're also participating in the token's inflationary upside.

Ethereum started its life as a PoW blockchain paying rewards to miners. But it will soon upgrade to PoS, paying rewards to stakers. With this unprecedented shift, Ethereum will drop its issuance of new tokens by roughly 90%, from 5.5 million ETH to just 600,000 new ETH minted each year.

On top of that, the Ethereum Improvement Proposal 1559 that was implemented last year kicked off a "burn" mechanism where some ETH is burnt and destroyed forever with each block. With the 90% drop in issuance and burn mechanism, ETH will transition from being inflationary to deflationary. The outstanding supply of ETH will slowly decrease from the second the merge is completed until the network stops running.

You can think of this deflationary model like a stock buyback. When companies have extra cash, they often buy their shares off the open market so that each outstanding share holds a proportionally larger share of the company.

The same will happen with ETH. Every ETH will soon control a proportionally larger and larger share of the network. If someone stakes ETH, it will be like owning an ever-growing share of an ever-shrinking pie.

That's why I believe ETH and several smaller tokens built on the Ethereum network will skyrocket in price. So now is the time to get in.

Editor's note: This "cutoff" could take place as soon as August 31. And you need to make sure you know what’s coming and how to prepare... because according to Eric, even if you’ve never purchased a crypto before, this change could still have a major impact on your bottom line for years to come. Click here for the full story.

"A time will soon come when this technology is everywhere," Eric writes. That includes verifying authentic real-world purchases through the blockchain... in unexpected ways. Read more here: A Blockchain-Powered Future Starts With 'Fingerprints' on Wine Bottles.

"The crypto space is full of fantastic opportunities," Eric says. "However, many individual investors simply don't know how cryptos work – or what they're good for." If you want to understand these assets, get started with the basics here: What You Want to Know About Cryptos... But Are Too Embarrassed to Ask.