The 'FANG' Breakup Will Lead to Rising (and Falling) Stars
By Marc Gerstein
Wednesday, November 9, 2022

Editor's note: These four companies reigned together as one... until the bear market began. Now, according to Marc Gerstein – director of research at our corporate affiliate Chaikin Analytics – it's time to think differently about these former winners. In this piece, adapted from the Chaikin PowerFeed newsletter, he explains why the "FANG" stocks are breaking apart... and what that means for investors.

The Beatles' breakup was a shame – but the band couldn't last forever...

Among other things, George Harrison hated the group's grueling tour schedule. But Paul McCartney loved playing in jam-packed venues at the height of the "Beatlemania" craze. Harrison also wanted to write more of his own music for the group.

Finally, in April 1970, McCartney announced that he was leaving the band. The group's four members never worked together at the same time again.

But that doesn't mean they didn't thrive on their own. That's especially true of McCartney. He launched a successful solo career, and he's still touring more than 50 years later.

Today, a Beatles-like breakup is going on in the market.

Two members of a popular group of stocks are setting out on different paths. Importantly, though, one of them is much more likely to succeed...

The group that I'm talking about is the so-called "FANG" stocks. Financial-TV analysts, including CNBC's Jim Cramer, popularized the term about a decade ago.

At the time, FANG stood for Facebook, Amazon (AMZN), Netflix (NFLX), and Google. Over the years, marketing folks and company "visionaries" messed with the acronym... Google became Alphabet (GOOGL), for example. But most folks still say "FANG" – or they include Apple (AAPL) in the tech-centric group and use "FAANG."

Like the Beatles in 1970, two FANG stocks are going their separate ways today...

It started with Netflix back in January. The company quietly admitted in its earnings report that competition was hurting its growth. As a result, the stock fell about 22% in one day.

Then, in February, Facebook's parent company Meta Platforms reported a modest decline in users. That isn't supposed to happen with a FANG company. So its stock plunged 26%.

In April, Netflix shocked Wall Street again. Its earnings report showed big customer losses. It hadn't lost subscribers in more than a decade. So in turn, its stock fell 35%.

After that, Netflix and Meta Platforms diverged...

Netflix acknowledged some big problems. The company has known forever that many users share passwords instead of getting their own accounts. It has been working to fix that. And now, it might have a solution...

In short, the company plans to charge an "extra member" fee for each profile that isn't part of a premium user's household. And related to that, a new feature will allow folks to transfer their personalized recommendations from a shared Netflix account to a new, independent account.

Netflix also recognized that many folks didn't want to pay high fees for its service. So it's now introducing a lower-priced subscription tier, as long as folks watch ads along the way.

In short, Netflix is being proactive as this FANG breakup plays out.

The Power Gauge sees that, too. This is our all-in-one stock analysis tool at Chaikin Analytics. It's now "bullish" on Netflix. And there's more, thanks to our relative strength indicator...

We want to find the best stocks in the market that are beating their benchmark or their peers. At Chaikin Analytics, we focus on relative strength versus the S&P 500 Index.

As you can see in the chart below, that indicator just transitioned to "bullish" for Netflix at about the same time as its overall Power Gauge rating flipped to "bullish." Take a look... 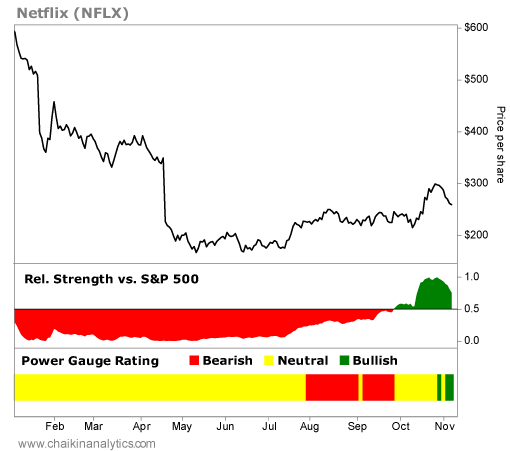 A near-simultaneous improvement in the overall Power Gauge rating and the relative strength indicator is what we call a "bullish personality change." That's a great setup.

On the other hand, Meta Platforms continues to struggle. The company recently reported another quarter of disappointing results. It cited heavy spending and weak prices for ads.

When customer counts and revenues are careening lower, most companies look to cut costs – or at least moderate them. But Meta Platforms is being stubborn...

The company plans to spend between $85 billion and $87 billion this year to build the "metaverse" (essentially, an immersive virtual world). And instead of cutting costs, it plans to boost them to between $96 billion and $101 billion in 2023.

The relative strength indicator has been persistently dreadful for Meta Platforms.

Also, look at the Chaikin Money Flow indicator. This indicator tells us what the "smart money" is doing. And these investors are clearly fleeing Meta Platforms. Take a look... 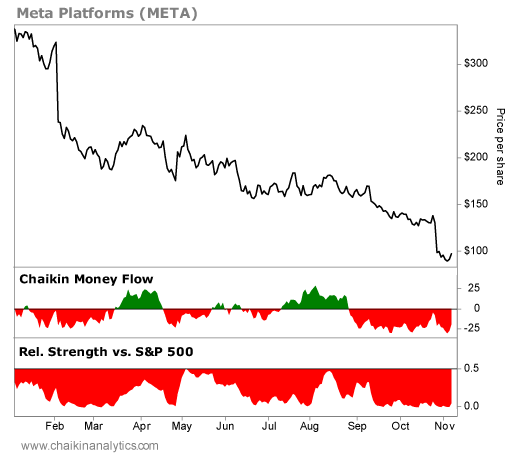 When it comes to these two FANG stocks, the takeaway is clear...

Netflix hit hard times, and it's taking steps to turn things around. But when Meta Platforms ran into trouble, it did the opposite. It's doubling down and increasing costs.

As we all know today, life carried on after the Beatles broke up. McCartney and Harrison did just fine on their own. They both had successful solo careers.

We moved on and judged them on their own merits. It's time for investors to follow suit with the FANG stocks...

Don't blindly lump these stocks together based on their old group. Instead, take the time to analyze them independently. You'll see that some of them are stronger than others.

Editor's note: Marc Chaikin, founder of Chaikin Analytics predicted the 2022 sell-off... and the crash of 2020. Now, he's going live with a new warning. On Tuesday, November 15, this Wall Street legend will reveal why we're about to see a shift in the U.S. financial system... one that could have a huge impact on your wealth in 2023. You don't want to miss this – especially if you have a lot of cash in the bank right now. Sign up for his online event to find out more.

"The 10-baggers won't come from the stocks you and everybody else have heard of," Marc Gerstein writes. If you want to make outsized returns, you have to move beyond the FANG stocks – and instead, start looking for hidden upside potential... Read more here.