Yesterday, I explained the idea of "China-phobia." Today, I want to give you an insider's look at China-phobia... what causes it... and what the reality is.

The best way I could think of to do it is to share an interview I did recently with a man named Kaiser Kuo.

He was born in New York. His dad worked for IBM. He went to UC Berkeley for college. Today, he lives in North Carolina.

He actually started China's most famous heavy metal band – Tang Dynasty – in the late 1980s. He lived in China for 20 consecutive years, starting in 1996. And more recently, he worked as an executive for Baidu (BIDU) – the Google of China.

Nobody I know has a better understanding of what it feels like to be an American – and to be Chinese. Kaiser is truly bicultural.

Let me share some of his insights from our interview on American perceptions of China versus the reality in China...

Steve: When I tell Americans that China is ahead of us in technology use, they don't want to hear it.

Kaiser: I think when we're talking about innovation in China and in the United States, it's important to understand the cultural and social matrix in which these take place...

You look at China, China has seen technology develop very much in lockstep with its really rapid growth. There's a kind of faith in the ability of technology to deliver better lives.

Compare that to the United States right now, where there's a lot of anxiety about technology...

If you look at some of our leading technologists, people like Bill Gates or like Elon Musk, they're out in public warning about the perils of – Elon Musk called it "summoning the demon" of artificial intelligence – that there are going to be armies of killer robots and we better really start worrying about that now.

That conversation is barely happening in China...

There are concerns raised about the jobs that might be lost to advanced robotics and things like that. But by and large, there is this faith that this will deliver better lives. It's a really big contrast.

Steve: In my travels to China, I can't believe the changes I've seen in the last five to 10 years. What would you say is the biggest change you've seen?

Kaiser: I have to say the biggest changes weren't at all in the last 10 years... Really, I think it was the decade of the '80s where the light in people's eyes changed.

Look, I think one thing Americans need to keep in mind when they look at China is: all this change that they've witnessed has happened in the space of one biological generation.

You can do a lot in terms of "hardware" change in a biological generation – all the magnificent forests of steel and glass [the skyscrapers] that we see now.

But the more important change that has to take place is in the "software." That is really in the psychology of people, the mentality of people. That changes more slowly, but those changes are ultimately much more important.

And where I saw the biggest sort of transformation in that was in that decade of the '80s, where there was almost insatiable curiosity about the outside world just because it had just opened up.

People were on fire and they didn't stop trying to drink deeply of all this suddenly available knowledge that was around.

Steve: But China is still a communist nation...

Kaiser: It's quite obvious to me when I look at the dysfunction of the New York subway system, and I look at how elegantly it runs in Shanghai or in Beijing [with some trains traveling at 250-plus miles per hour].

Look – China, in part because it has this authoritarian system, which is of course a source of many of its ills... It's also the source – I think we have to be fair – of many of the advantages.

Because it can do some farsighted planning. It understands the importance of laying down infrastructure.

It has reaped a lot of rewards from that. And it's very double-edged. I don't know that I would trade one for the other.

I think that much of it has to do with the political culture, the prioritizations that people give to things.

Will I trade a little bit of personal liberty for a little bit of convenience and safety? Well, maybe I will here in China. Maybe I wouldn't as much in the United States.

[They're] very different countries. And I think we have to respect the choices that they make.

Steve: Can you talk a bit about the American misconceptions about China – for example, how Americans believe it's home to low-quality manufacturing?

Kaiser: I think a lot of Americans can be excused for having certain preconceptions about what China's like. Most Americans really know what they know about China through the lens of the media...

When I pick up the New York Times on any given day, I'm going to read a lot of negative stories... But I live in America, and I know that America isn't on fire and it's not about to burn down. I know that there's a lot of plain old human-interest stories that are going to moderate my view on things.

So you end up having sort of a warped view on China that tends to have more negative stories. And that's structural – it's not malicious.

Steve: But what about low-end manufacturing, and the trade war that's on everybody's minds today?

Kaiser: I think the important thing to recognize right now about the trade tensions between China and the United States is that they really are NOT about low-end manufacturing.

The anxieties are really very much centered on technology... on worries that China is pursuing a very aggressive industrial policy around dominating the technologies that will really define manufacturing in the future...

Now, I don't understand the American "allergy" to industrial policy. I think that it's slightly disingenuous. We [Americans] do pursue it as well.

I think that we sort of have airbrushed out, in our own version of the history of Silicon Valley, the role that the Department of Defense actually played in getting a lot of it started.

I think that we have this mythology that it's all about scrappy entrepreneurs bootstrapping. But really Germany, Japan, a lot of other countries: they have achieved their status as technology superpowers primarily because of government working with the private sector.

I think that we have a lot to learn, actually, from China in that regard. And I also think we overestimate the actual role that the Chinese government will play in implementing some of these policies.

Steve: So how does all this play out?

Kaiser: I can see sort of short-term challenges that, to me, don't lend themselves to easy solutions. I think that we're in for a period of pretty serious friction right now between the United States and China. And that's not good for either economy.

But I think at the same time, I am extremely bullish on where China is going to be going.

The truth in U.S.-China relations is always more nuanced than the headlines.

Kaiser is a great "bridge" across both cultures. He understands the U.S. like an American, and he understands China like the Chinese.

This perspective is the perfect combatant to China-phobia. It allows us to see the reality of what's happening in China, without the bias we naturally bring to the topic as Americans.

The simple fact is that China is likely the biggest economic story of this century. And that means it will likely be one of the most important investment stories too.

Again, I hope you're able to resist China-phobia and put money to work in China when the time is right.

"I strongly believe that sometime in the next five years, Chinese stocks will soar more than 100%," Steve writes. Find out why he's so optimistic despite the recent downturn right here: The 'Plunge-Protection Team' Arrives in China.

"The potential upside in Chinese stocks from here is huge," Steve says. "But it won't be a one-way move higher." Learn how he plans to take advantage of the long-term opportunity in China right here.

As regular readers know, buying cheap, hated assets can lead to huge gains as sentiment returns to normal. Steve calls this idea “bad to less bad” trading. We can see this at work as today’s company proves its long-term prospects are on the right track…

Starbucks (SBUX) is an $84 billion coffee retailer. The company has more than 14,000 locations in the U.S., and it aims to have 6,000 stores in China by 2022. However, back in June, shares plummeted when Starbucks announced its plans to close 150 struggling stores amid slower sales growth in the third quarter. Today, it’s clear investors underestimated this global giant… In its fourth-quarter results, Starbucks reported record sales of $6.3 billion. Revenue, profit, and same-store sales all beat Wall Street’s expectations.

As you can see in today’s chart, SBUX shares have completely rebounded. Since bottoming on June 28, prices soared more than 30% to reach a new 52-week high. It’s more proof that huge gains are possible as things get “less bad”… 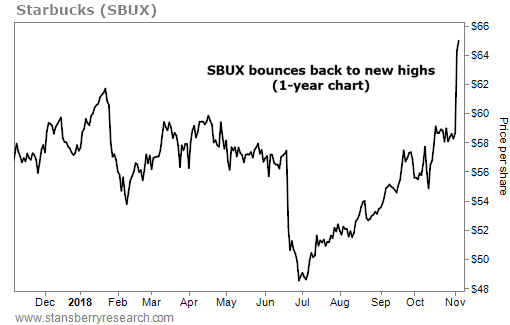