The Future Is Closer Than You Think
By Matt McCall
Saturday, August 20, 2022

Editor's note: This Weekend Edition, we're taking a break from our usual fare. We've adapted this essay from Matt McCall's Daily Insight, highlighting the bright future we have ahead of us... and examining the very real progress happening in one of the biggest megatrends of what he calls the "Roaring 2020s"...

You probably saw the stories that day "celebrating" his birthday. While it was lighthearted news in contrast to everything going on in the world today, I thought it was intriguing to think about in terms of the progress we've made since The Jetsons aired.

So in the spirit of innovation, I want to talk about where we are now... and where I think we're heading.

As crazy as flying cars may have seemed when the cartoon was created 60 years ago, The Jetsons is not as far-fetched as you might think...

Forty years from now (which is about George's age during the show), I can almost guarantee there will be flying cars in the skies all around the world. Remember, earlier this year, I was just outside London to tour the first vertical takeoff and landing airport in the world.

According to Smithsonian Magazine, The Jetsons "stands as the single most important piece of 20th century futurism." Believe it or not, the show only ran for one season (24 episodes) in 1962.

In just those initial 24 episodes – followed by 51 more in a 1985 reboot – the show was able to predict a large number of advances that we already take for granted. For example, the Jetsons were able to call people over a large screen, just as we can with FaceTime and Zoom today.

Or even think about when George's son, Elroy, was sick and did a video call with the doctor... 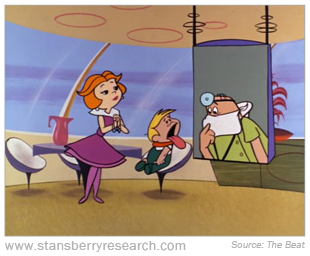 Telehealth has been a major trend in my investing strategy for years. And as we all know, the pandemic kick-started the telehealth boom in a big way. Now, the technology is quickly becoming the norm for certain kinds of doctor's appointments.

But let's keep looking at other Jetson innovations we're seeing versions of today. Rosey the Robot maid took care of their household... You might even consider the Roomba vacuum cleaner a step in the same direction. Even though human-like robots aren't yet the norm, this could still be a reality in the future.

Mornings were easy in the Jetson household – all you had to do was push a button and food came flying out of a machine. Again, we're not there yet, but 3D-printed food – like pasta, specialty chocolate, and plant-based steaks – is quickly becoming part of everyday life and could be in your kitchen before you know it.

George and his family would also often fly around in their jetpacks. Sure, there are jetpacks out there, but we're nowhere near strapping one on to casually run to the grocery store. While we might be a ways away from that for now, I definitely think we'll see this in the future.

Remember, there are still four decades to go until we're in the time period George was living in... So I believe a lot of the technologies we saw there will become our reality by then.

I love thinking outside the box to look at how dramatically the world has changed through technological innovation over the last few decades. And I encourage my readers to do the same to see all the opportunities that are out there now – and of course, those that are coming further down the line.

Speaking of opportunities... Longtime Daily Insight readers know that the mainstream adoption of electric vehicles ("EVs") – and the future of transportation in general – is one of my favorite trends for the Roaring 2020s.

It's as close to a sure thing as you can get in the stock market.

And about a month ago, another industry leader dove into the future of transportation with an exciting innovation...

Considering that I've followed this trend in my newsletters for some time, it's simply more proof that we're on the right track and ahead of Wall Street.

Chinese tech giant Baidu recently showed off its new "robotaxi" to the world – the Apollo RT6. The new EV will have a detachable steering wheel and be about 50% cheaper than previously estimated.

Baidu expects the RT6 to cost around 250,000 yuan, which is roughly $37,000. The vehicle already has approval to begin ride-hailing operations in Beijing this November. Initially, the company will still require a driver to sit in the car. But that could change as more testing is completed.

And this is only the beginning. With the decrease in its production costs, Baidu plans to build 100,000 of these new robotaxis. 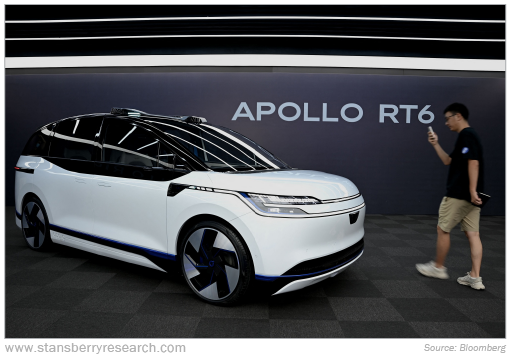 And here's a look inside the car... 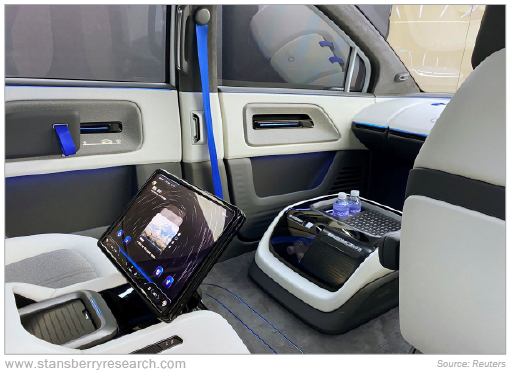 The RT6 doesn't need a steering wheel because it's designed to be driven by itself. And while we're not there quite yet, I don't think this reality is too distant.

Just think of all the new innovations that will come with driverless cars. For one, it opens up a lot more space in the vehicle itself. The inside of the RT6 has a ton of extra legroom and storage space.

But it'll also change the way people take trips. You can hail a robotaxi on your smartphone, then just sit back and watch TV or do some work until you arrive at your destination.

Not only that, but robotaxis are also likely to be much cheaper than traditional taxis because they won't need a driver.

As someone who's constantly on the road, that scenario sounds ideal. And from an investment perspective, it's a megatrend with huge profit potential.

The technological progress we've made in the past 60 years is incredible. Ideas that used to seem far-fetched have become reality – and the rest are looking more and more possible. As I say again and again, you can't stop innovation.

To put it simply, I can't wait to see what the next decade holds...

Editor's note: Stocks have taken a wild ride this year. Many of the biggest growth stories are still down... But Matt has found the ONE sector that could lead to 10X, 20X, 30X returns or more over time, no matter what the markets do.

That's because right now, the U.S. is revitalizing a "hidden" industry. We depend on it for everything from laptops and smartphones... to defense missiles, electric vehicles, robotaxis, and more. That's why Matt recently went on camera to reveal all the details, including how you can access the six companies leading the charge. Click here to get all the details.