The Future Is in the Cloud... And There's No Turning Back
By Corey McLaughlin
Saturday, September 12, 2020 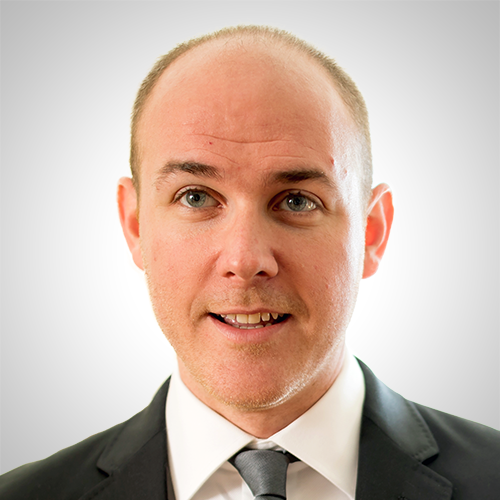 New buildings are appearing in many suburban backyards... 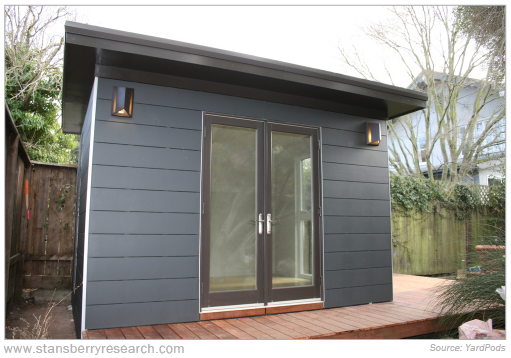 It's not quite a gardening shed – and not quite a pool house, either... It's a home-office pod.

It includes just enough space for a desk and a chair, as well as some walking room and natural light... kind of like those "tiny houses" that became all the rage starting a few years ago.

Except this is a getaway from your house. It's a place to work in our "stay at home" pandemic times.

Construction of these new buildings is a certifiable trend, as the Chicago Tribune noted last month...

Tiny house builders and garden shed manufacturers across the country are pivoting to create home office structures that range from compact, prefabricated deluxe sheds to more elaborate custom designs. And business is booming.

"A soon as the quarantine and having to work from home started, the requests for our sheds doubled," said Brennan Deitsch, online marketing manager for Heartland Sheds. "A lot of people never really had their home set up as an office, so having a quiet place allows them to make the most of the work-from-home lifestyle," he said.

Have you been working at home longer than you thought you would be?

We have. I would be lying if I said I didn't think we'd be back in the office for at least a few days a week by now.

Don't get me wrong, working from home – if you can – has its perks... starting with the simple fact that I have a regular-paying job that allows me to think big and share what all of our Stansberry Research editors are saying each and every day.

However, productivity and morale considerations aside, it would be nice to simply get out more during the day. Maybe it's just me, but I'd prefer to see the familiar faces of coworkers instead of interacting through e-mails and video chats.

Everyone has their own feelings about our new work world, and there's plenty to discuss on this topic in the months ahead.

We speak from an office-worker perspective today, but the point is... remote work isn't going away anytime soon.

First off, I'm healthy, and I have a job. But not everyone has been so lucky.

More than 190,000 Americans have reportedly died from COVID-19. The disease is the third-largest cause of deaths in the U.S. this year with four months to go... trailing only heart disease and cancer.

And of course, the pandemic and government shutdowns have taken their economic toll as well. They've shuttered many physical businesses – like retailers and restaurants – for good... and have limited regular business for so many others.

At least 18 million Americans who say they want a job right now don't have one. And nearly half of all work-eligible Americans don't have a job, either by choice or by necessity.

We're hearing all kinds of stories about people and families adjusting to kids going back to school (or not), offices closing (or not), and jobs coming back (or not).

COVID-19 has left a lasting mark on the economy. Life is different.

And of course, none of this has done anything to ease the brick-and-mortar retail "apocalypse"...

We saw it on display at a single shopping center in suburban Baltimore. At one end, home-improvement retailer Home Depot (HD) had giant orange letters – We're Hiring! – painted on its front windows.

Just a few stores away, Modell's Sporting Goods – one of the dozens of nationwide retailers that has filed for bankruptcy over the past few months – was selling literally everything in the store for at least an 80% discount.

And when I say it was selling everything, I mean it... down to the cash registers, mannequins, tape dispensers, and employee lockers.

If you're not an "essential" business, you're in trouble...

Why "go to Mo's" when you can buy the same sporting goods online and get free shipping (in many cases)?

Take food as another example... We all need it. But we can eat at home, too.

So online ordering and curbside pickup have become normal... Yet at the same time, more and more restaurants – killed by customers' reluctance to sit among strangers during an airborne virus pandemic – have been closing down for good.

On the other hand, if you're an "essential" part of these essential businesses, you're doing quite well...

That might sound confusing at first, but here's what we mean...

In today's world, data is the new oil. That means the companies that control data, including cloud-based vendors and storage companies, are the new pipelines and oil fields.

As our colleague Alan Gula wrote in the August issue of our flagship Stansberry's Investment Advisory newsletter, one area of technology that many of our editors love is Software as a Service ("SaaS")...

This type of software lets you order food from a local restaurant... or connect to your company's networks and do business around the world from your house – or even a shed in the backyard.

As we've written in the past, DocuSign (DOCU) is one of our favorite SaaS companies. The company, which sells e-signature software, has more than tripled since the Investment Advisory recommendation in November last year.

Not only are SaaS businesses practical for the user, they're incredibly capital-efficient and a "win-win" business model for software vendors and customers. As Alan wrote in August's Investment Advisory issue...

For customers, it lowers costs – they don't need to pay a large, upfront perpetual license fee, buy expensive computer hardware, pay to have the software deployed, and then pay a "maintenance" fee on top of all that. Under the SaaS model, there's just one regular subscription fee, and software updates and upgrades are automatic and seamless.

For the software vendors, cloud-based application hosting creates economies of scale. There's also only one software version to support since the upgrades occur behind the scenes on the vendor's servers.

In short, the SaaS model is superior to the perpetual license model. SaaS software is cheaper and easier to get up and running. It attracts many more new customers. And good SaaS businesses tend to have high renewal rates, leading to lots of recurring revenue.

All of these factors have led to explosive revenue growth.

Think about that... Overall, the index is just about breakeven for the year. And those five stocks are up an average of 44% in 2020.

This performance surely doesn't say much for the other 495 stocks in the index... But it does prove that tech stocks continue to thrive. And today, a lot of the major tech companies are cloud companies in one way or another.

The biggest SaaS player is Adobe (ADBE), which switched from a license model to a SaaS approach back in 2013... Its stock price is up more than 850% since the move.

But there are dozens of other "pure play" companies in the SaaS world that have outperformed even the biggest tech stocks over the years.

As Alan wrote in the August issue of the Investment Advisory...

Take a look at how it has performed this year compared with the overall market and the Nasdaq... 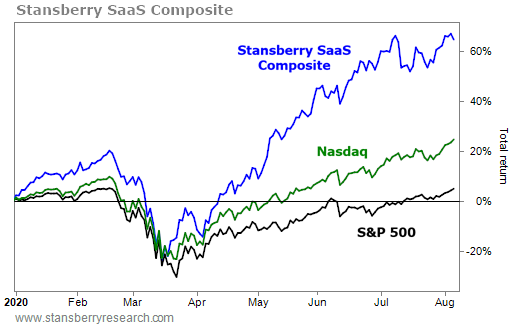 The Stansberry SaaS Composite is crushing both. It's up an astounding 64% this year... more than double the Nasdaq. And that's during a global pandemic.

In short, SaaS technology has become "mission critical" for thousands of companies...

And the footprint of the technology will only grow in the years ahead.

Change, especially changing the behavior of so many people, can be hard... But once that change is made, it can be even harder to convince people to go back and do something the way they did before.

In this case, a virus forced massive changes in the way we work and do business...

And now, there's no putting the "genie back in the bottle." People are putting up their own "work sheds" in their backyards. Cloud vendors and SaaS companies are bringing in piles of cash. The future is here. There's no turning back now.

Editor's note: The push for "togetherness while apart" has the SaaS sector riding a wave of wealth... Because of increased work-from-home setups and accelerated demand for technology worldwide, we believe SaaS stocks are set to soar by 1,000% or more. And one stock in particular is positioned to skyrocket 3,000% long term. Get all the details right here.